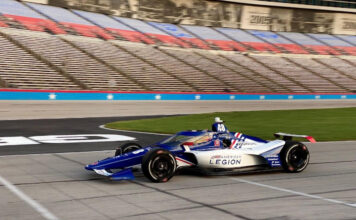 FORT WORTH, Texas (August 30, 2021) – Jimmie Johnson knows Texas Motor Speedway like no other, with a track-record seven NASCAR Cup Series wins to his credit, but his first laps on an oval behind the wheel of an IndyCar created a completely new race track for the seven-time series champion.

Johnson and his No. 48 Chip Ganassi Racing NTT INDYCAR SERIES team conducted a seven-hour test at No Limits, Texas, which began at 6 a.m. CT. in the relative cool (75 degrees Fahrenheit at sunrise) and finished just after 1 p.m. with a heat index of nearly 100 degrees Fahrenheit. Six-time and reigning NTT INDYCAR Champion Scott Dixon drove the initial laps around the 1.5-mile tri-oval, using the knowledge that’s taken him to five victories at TMS, including the 2021 GENENSYS 300 on May 1.

“To know that I could come here and test and experience it as a driver was important to me,” said Johnson. “Let’s go to the tough one. It’s one thing by myself. I feel like I can control my environment, and I’m very thankful that I’m able to go out here and do it. The way INDYCAR has advanced their safety and certainly what the tracks have done to increase the safety, my concerns are much less and that’s why we’re here today. Now that my concerns are at a certain point, now it’s time to get in the car and see what my point of view is from there.

“The car drives way different. It’s much more responsive so I’ve found the majority of the day just trying to acclimate to this new environment, one that’s much faster and certainly a bit more sensitive to the inputs that the driver gives to the car. But it’s been really nice to be on a familiar track. I know where I am, I know what to do, I know the line around this place, and even down to simple things like knowing where the hotel was last night or knowing how to drive into the tunnel and get into the infield. There’s been some small wins that are nice to have.”

In addition to Dixon, on-hand for Johnson’s maiden IndyCar voyage were a current and a former Chip Ganassi Racing IndyCar driver to offer insight and encouragement: Tony Kanaan (2004 series champion, 2004 TMS race winner, and Johnson’s current co-driver of the No. 48); and three-time series champion and 2011 TMS winner Dario Franchitti.

“It’s a challenging thing that Jimmie’s doing as I say, but so far he’s done very well,” said Franchitti. “Track conditions were a little nicer this morning at 6 AM when Scott (Dixon) went out and those early runs Jimmie did, but it’s heated up now, and he’s learning a little bit about how the Indy car slides around a bit when it gets hot.

About Texas Motor Speedway:
Texas Motor Speedway is among the largest sports stadiums in the United States and features an array of amenities such as the world’s largest TV that make it one of the premier venues in the world of sports. The 1.5-mile superspeedway located in Fort Worth hosts all three NASCAR national series as well as the NTT IndyCar Series among its various races and specialty events throughout the year. Since opening in 1997, Texas Motor Speedway has generated an annual economic impact of approximately $300 million to the North Texas region. Texas Motor Speedway is owned and operated by Speedway Motorsports, LLC, a leading marketer and promoter of motorsports entertainment in the United States. For more information, please visit texasmotorspeedway.com.