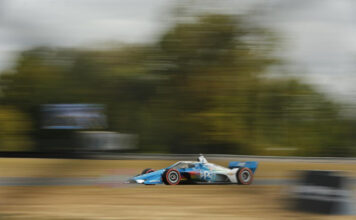 The top-five finish keeps Newgarden in championship contention leaving Oregon third in the standings, 34 points out of the lead with two races remaining in the season.

Pato O’Ward, No. 5 Arrow McLaren SP Chevrolet, finished a disappointing 14th when ill-timed yellow flags jumbled strategies for everyone. O’Ward is in the thick of the championship hunt leaving Portland second in points, 25 behind race winner and points leader Alex Palou.

A multi-car crash in turn one, lap one jumbled the running order significantly that NTT INDYCAR officials had to carefully sort out prior to the restart. Fourth-place starter Arrow McLaren SP Chevrolet driver Felix Rosenqvist was relegated to the back of the field with the other three starters from the front two rows of the field. With great strategy, Rosenqvist battled back to finish sixth.

FELIX ROSENQVIST, NO. 7 ARROW MCLAREN SP CHEVROLET, FINISHED 6TH: “Portland weekend is over and was eventful as always; especially in Turn 1, where we knew it was going to be crazy. We got unlucky at the start of the race when we avoided the collision that was about to happen in Turn 1. I didn’t really have a choice but to go straight. The way the rules are written, you get penalized if you go straight compared to the guys who stayed on the track. I couldn’t have really done anything so it was out of my hands, which is a shame. We were in third and came out 18th after the reorder.

The No. 7 Vuse Arrow McLaren SP team did a great job. We didn’t let that get us down, kept pushing, had really good pit stops, pit sequences, and the in and out laps were nailed every time. We kept getting ahead of cars each pit sequence and ended up with a sixth-place finish. I think we had a different kind of pace this weekend and it’s coming together more and more every weekend. Let’s ride out this wave and get some podiums the next two weeks.”

SCOTT MCLAUGHLIN, NO.3 PPG TEAM PENSKE CHEVROLET, FINISHED 9TH: “Pretty good day for us in the PPG Chevy. I led my first INDYCAR races so that was pretty cool. I thought we might get in the top-three, but unfortunately a mid-race yellow put us behind the two-stoppers. Our strategy was pretty aggressive, potentially put us in the top-six or so, but made a couple of little errors that cost us on the out-lap. Getting better and better. Leading our first laps just shows our promise. Good points. We will keep pressing on to Laguna and Long Beach in the next couple of weeks.”

PATO O’WARD, NO. 5 ARROW MCLAREN SP CHEVROLET FINISHED 14TH: “Today was obviously very tough. It just wasn’t our day. We got unlucky with some of the yellows and this race favored the alternate strategy, which you can see when you look at the results. It just goes to show how exciting of a sport INDYCAR is at every race. We gave it everything we had all weekend. The No. 5 Arrow McLaren SP crew was solid on every stop. We are up against some great competitors for the championship but we will come back the next two races and fight down to the last lap in Long Beach.”

SEBASTIEN BOURDAIS (NO. 14 ROKIT CHEVROLET): “Obviously a bit of a sore day here for us at Portland International Raceway. Man, it looked like it was going to be a great day and after avoiding the chaos at the start and getting the lucky break with the reordering and getting fifth out of that, it seemed like we were going to do really good. Unfortunately, we were on the three-stopper with Pato and Ericsson and those guys and the yellows fell at exactly the wrong time for the three-stoppers like us and at the perfect time for the guys that suffered at the beginning of the race on the two-stopper and we could never recover from that. On top of that, we got tangled with Oliver Askew – more of my fault than his fault – and we were fighting with Veekay and he ended up just not quite giving me enough room to be able to make the lap. I was on the curb and just tapped the brakes when I saw him turn and just caught his left rear tire trying to get out of it. Just a shame we’re not getting much out of this weekend when we clearly had some pace, had a pretty decent qualifying and just a shame that we couldn’t transform the essay and we couldn’t get some good points again.”

DALTON Kellett, No. 4 K-Line Insulators USA AJ FOYT RACING, ChevroleT, FINISHED 26TH: “I’m so gutted for the No. 4 K-Line Insulators USA Chevy team. We were having a great race going and got a little lucky off the start with that melee and the way that the order was reshuffled. Gained some good positions and was able to hold on and be competitive. The pace felt strong compared to where we were in qualifying, so really happy with that. It’s just a shame how this race ended early for us. Looks like we had an electrical issue. We haven’t diagnosed that yet, still waiting for the car to come back. We’ll figure out what it was and make sure it doesn’t happen again. This has been a tough weekend with it kind of being up and down for qualifying, things like that. The race performance, was happy with that. That’s a positive we have to take out of this weekend and just diagnose the mechanical issue and go from there. ”