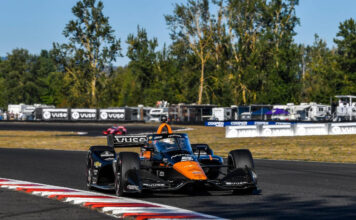 DETROIT (Sept. 15, 2021) – The focus will be on three drivers, including two powered by Chevrolet’s V-6 engine, as the tight NTT INDYCAR SERIES championship chase heads into its penultimate event this weekend at WeatherTech Raceway Laguna Seca.

A maximum 54 points are available in the Firestone Grand Prix of Monterey on Sept. 19 and the finale Sept. 26 on the temporary street circuit in Long Beach, California. Basically, the title is up for grabs.

Two 45-minute practice sessions, qualifications and a 30-minute race day warm-up precede the 90-lap contest on the 2.238-mile, 11-turn road course that features a 300-foot elevation change and the famous “Corkscrew” in Turns 8 and 8A.

The NTT INDYCAR SERIES returned to the venue in 2019 after a 14-year absence. The event was not contested in 2020 because of the COVID-19 pandemic.

O’Ward, 21, a two-time winner and three-time pole sitter this season, will make his first NTT INDYCAR SERIES start at WeatherTech Raceway Laguna Seca. He recorded one victory in five Indy Pro 2000 races in 2015-16 at the track.

“We are up against some great competitors for the championship, but we will come back the next two races and fight down to the last lap in Long Beach,” he said. “No pressure.”

Newgarden is the most seasoned of the title contenders, winning the championship in 2017 and ’19 and finishing a close second in the truncated 2020 season. He’s seeking to become the 13th three-time NTT INDYCAR SERIES champion.

“Going into Laguna Seca 34 points out of the lead is definitely doable. We are in the fight for the championship and that’s all we can ask,” said Newgarden, who qualified fourth and finished eighth in the 2019 race at Laguna Seca. “We have to hit on all cylinders these next two weeks and I’m confident in this team to be at a championship level.”

Scott McLaughlin’s ninth-place finish at Portland – his second consecutive top 10 and fifth of the season — gave the driver of the No. 3 PPG Team Penske Chevrolet the inside track to the INDYCAR Rookie of the Year award.

Callum Ilott, who made his NTT INDYCAR SERIES debut at Portland in the No. 77 Juncos Hollinger Racing Chevrolet, will remain behind the wheel for the final two races. Ilott, 22, of the United Kingdom, was the 2020 Formula 2 championship runner-up and is a Ferrari Formula One test driver.

“We have all been working hard together over the past few weeks to build our program, so it feels great to carry this relationship as a team for the rest of the season,” team co-owner Ricardo Juncos said.