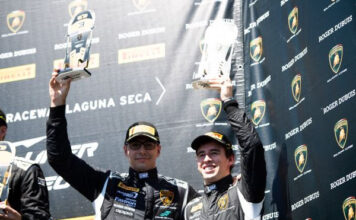 After climbing from ninth overall on the starting grid to a fourth-place finish in Saturday’s opening 50-minute race, Aghakhani, Eidson and the SADA/USRT team came into Sunday’s finale determined to get back on the podium.

Rolling off from third on the grid, Eidson moved up to second for a few laps at the start of the race to begin a challenging battle in the top three he and closing driver Aghakhani would wage the entire race.

“We had some higher hopes for Sunday, but it was getting progressively hotter and hotter as I was getting in the car,” Aghakhani said. “Jacob held second as long as he could and brought the car in third. I went out and it was just an absolute nightmare. There was no grip and the tires were gone, but we just had to go out there, kept our cool, brought the car home safe and collected some hardware in victory lane.”

Eidson also got the most out of the SADA Systems No. 6 Lamborghini despite the challenges.

“Laguna Seca is always really challenging in terms of setup and tire degradation,” Eidson said. “That was the theme of today, major tire degradation. Steven and I both did the best we could with what we had. The team always gives us the best car possible and sometimes the deck is stacked against you and you just have to do the best you can with what you’re dealt. I had a good start and moved to P2, but then one the tires fell off and we dropped back one spot, but it was still a good race.”

A highlight of Saturday’s otherwise forgettable race was Eidson’s last-lap pass for fourth, a move in Laguna Seca’s legendary Corkscrew set of turns that reminded some of Alex Zanardi’s famous “The Pass” from 1996.

“After getting hung out in qualifying for race one, we had to suck it up and just start the race from ninth,” Aghakhani said. “We got the car up to P8 but got stuck behind another car in another class. I brought the car into the pits and Jacob went out and climbed all the way up to fourth. He actually did a Zanardi move in the Corkscrew, got past fourth and we took that position overall for the first day.”

In total, Aghakhani, Eidson and the SADA/USRT team have hit the podium in seven of the year’s first 10 North American races, a consistent run that includes at least one top-three showing on each of the five doubleheader race weekend events held to date this season.

With the North American portion of the 2021 Super Trofeo season complete, next up is the season-ending sixth doubleheader of the year that will be held in Misano, Italy in late October, just ahead of the season-ending World Finals at the same Italian circuit.

“We got some good points this weekend at Laguna Seca and it’s on to the World Finals,” Eidson said.

Before Aghakhani and Eidson pack their bags for Europe, however, a more familiar challenge awaits in just two weeks. With the support of longtime partner SADA Systems and new sponsor Raymond James – which was on the car for the first time this weekend at Laguna Seca – Aghakhani and Eidson make their IMSA WeatherTech SportsCar Championship GT Daytona (GTD) debut at the Grand Prix of Long Beach, September 24 – 25.

“Long Beach is going to be fun,” Aghakhani said. “It’s a different breed of races, the entire crowd, everyone out there and the car we’re using. Everyone is going to be there, Formula Drift, Trophy Trucks, GTLM, Prototypes, and us in the GTD class. There’s so many different kinds of cars, things to do out there, and it’s only an hour away from home. We could even go back home, enjoy a meal and come back!”

Aghakhani’s racing programs run with the support of several key sponsor partners in 2021. SADA Systems, Inc. is a privately held global leader in providing business and technology consulting services that transform organizations through cloud-based solutions at www.sada.com The Global Wealth Solutions Group of Raymond James has far-reaching abilities to help clients. Their team has a global focus while maintaining an intimate focus on each client’s world. Learn more at www.raymondjames.com. Magic Laundry Services (MLS) is one of the largest independently owned hospitality linens and dry-cleaning operations in the country, catering primarily to the hospitality industry. Learn more at www.magiclaundryservices.com. TKX Associates specializes in consulting and staff augmentation at www.tkxassociates.com, Shegerian & Associates is a Los Angeles based firm at www.shegerianlaw.com. Insignia Mortgage focuses on providing flexible portfolio lending options for clients with non-traditional lending needs. Learn more at www.insigniamortgage.com. The Tax & Business Consulting Group is a Los Angeles-based public accounting firm at www.alllp.com. Equeduct provides capital funding solutions for small businesses at www.equeduct.com. O’Gara Coach is a luxury and high-performance auto dealer in Beverly Hills, Westlake Village and San Diego. Additional valued partners include Forgiato Wheels, Speed Society and the Pro Automotive Repair Center in Glendale, California.