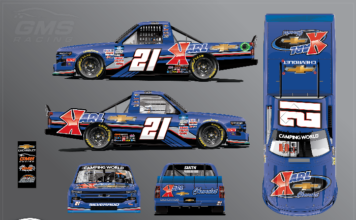 Statesville, NC — GMS Racing is proud to announce a partnership with Karl Chevrolet, a premier Chevrolet dealer based in Ankeny, Iowa. The newfound partnership will culminate on Zane Smith’s No. 21 Silverado under the lights at Bristol Motor Speedway.

Karl Chevrolet is no stranger to the NASCAR world, as the dealership has sponsored a number of drivers over the years in NASCAR Camping World Truck Series and ARCA Menards Series competition. In fact, this won’t be the first time that Karl Chevrolet partnered with GMS Racing either, as the duo initially paired up in 2017 at Michigan International Speedway with Johnny Sauter behind the wheel.

Thursday night’s race at Bristol will mark an important opportunity for driver Zane Smith to advance to the next round of the NASCAR Camping World Truck Series Playoffs. Entering the weekend, Smith finds himself five points below the cutline, so a stellar run must be in the cards in order for the 22-year-old to advance.

Smith looks forward to the challenge, and welcomed his newest partner by saying “I am proud to represent Karl Chevrolet this weekend at Bristol Motor Speedway. My GMS Racing No. 21 team and I have been working hard to prepare for this Playoffs cutoff race and I believe that we will have a good shot at advancing to the Round of 8. Bringing on new partnerships at this time of the season is crucial to our success on the racetrack, and I look forward to giving it my all for the Karl Chevrolet family of employees and customers on Thursday night.”

Fans can view the UNOH 200 Presented by Ohio Logistics with live coverage on FS1 on Thursday, September 16th at 9:00 PM ET. Tune-in to watch Zane Smith carry the No. 21 Karl Chevrolet Silverado to the front at the ‘World’s Fastest Half-Mile’.

Carl Moyer first opened his doors to Karl Chevrolet in January 1978, he started with nothing more than a vision and a plan. He quickly established a set of ground rules that always put the customer number one, treating everyone the same after a sale as he did during the purchase process. With his hands-on approach and daily involvement we can proudly say this attitude has not changed in over 43 years. Now with 6 dealerships in Iowa, as well as Karl Kustoms, his goal has always been focused on being Your Dealer for Life®. We’re here to help from every angle of the buying and aftercare process, and we’re eager to help you realize your automotive dreams. For more information, please visit www.karlchevrolet.com.