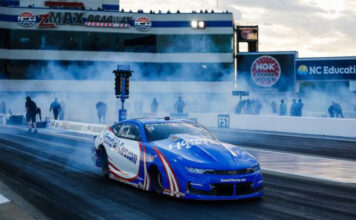 DETROIT (Sept. 16, 2021) – Much like he has done throughout his march to 97 career Pro Stock victories, Greg Anderson takes a “one race at a time” approach to the National Hot Rod Association (NHRA) Countdown to the Championship.

Next in line for the driver of the HendrickCars.com Chevrolet Camaro SS – and 12 other Team Chevy title contenders in three professional categories — is the DeWalt NHRA Carolina Nationals at zMAX Dragway in Concord, North Carolina. Anderson enters the second event of the Countdown as the most recent Pro Stock race winner and points leader.

“I go to every single race trying to win that race. If I keep that mindset, that’s going to add up to be a championship,” said Anderson, who is taking aim at his fifth title and first since 2010. “I don’t go to a race hoping that I make more points than my toughest competitors. That’s not a win to me. I don’t try to count the points, I count the wins. I’m going there with one goal in mind and that’s to win the race and that’s going to add to my grand point total.”

One win will break a tie with Warren Johnson for the most all time in Pro Stock and second only to John Force’s 154 career Funny Car victories.

“I’m going to my home track of Charlotte and we’re going to have a ton of fans out here, and all the Hendrick Automotive Group will be there. I can’t think of a better place to break the record,” said Anderson, who will be inducted into the North Carolina Motorsports Hall of Fame on Oct. 8. “Yes, the championship is the grand plan but there are a few more immediate goals on my list and that is to win the race.”

John Force enters the weekend as the Funny Car points leader in the PEAK Antifreeze & Coolant Chevrolet Camaro SS after a runner-up finish Sept. 12 in Reading, Pennsylvania. Teammate Robert Hight, a six-time winner at the track, is fifth in the Automobile Club of Southern California Camaro SS.

“We’re having a good season. We’re running well. Danny Hood and Tim Fabrisi have this PEAK Chevy just right, everyone is doing their job, I’m just hanging in there, trying to keep up,” said Force, who was the No. 1 qualifier and won the four-wide event at zMAX Dragway in May. “It’s the Countdown now, it’s time to fight. I’m loving it. I live for this.”

Record-setting Top Fuel star Brittany Force will aim for her second victory of the season, which would vault the driver of the Monster Energy Chevrolet dragster into first place, and her eighth consecutive No. 1 qualifier honor. Force is only 12 points behind front-runner Steve Torrence.

BRITTANY FORCE, JOHN FORCE RACING, MONSTER ENERGY CHEVROLET DRAGSTER (Second in standings): “This Monster Energy team is heading to race two of the Countdown and we plan to capitalize on our hard work from last weekend. We are in the hunt for this championship and are currently sitting two in points. We plan to keep chipping away, gaining bonus points where we can and winning at zMAX to take over the lead.”

JOHN FORCE, JOHN FORCE RACING, PEAK ANTIFREEZE AND COOLANT CHEVROLET CAMARO SS (Points leader): “I always love coming to zMAX, it’s a beautiful track and we get to race here twice a year. The four-wide is great, it’s a spectacle, the fans love it. But then, we get to come back in the Countdown, when everything is on the line and the fans get to see competition at its highest level. We’ll put on a show, so fans better be ready.”

ROBERT HIGHT, JOHN FORCE RACING, AUTO CLUB OF SOUTHERN CALIFORNIA CHEVROLET CAMARO SS (Fifth in standings): “We know what we need to do to get this thing done. This Auto Club team can do it. I have all the confidence in Jimmy Prock, Chris Cunningham and my entire team. We’re getting some consistency, which is what we need. Now we just need to keep it going, pick up points where we can, be aggressive and go after wins. We’ve had a lot of luck in Charlotte, hopefully that continues. We need to make good runs, clean runs, but we can’t be safe either. Jimmy and Chris, they’ll have this Chevy just right. I just need to do my job too.”

GREG ANDERSON, KB RACING, HENDRICKCARS.COM CHEVROLET CAMARO SS (Points leader): “Racing at Charlotte, we have all our family, employees and their families, friends here, so it means a lot to win here. And with HendrickCars.com on the side of the car we’re going to have about 150 of their employees out there on Sunday. I want to make the whole Hendrick Automotive Group proud having their name on the side of the race car. There’s a lot of the line here. Yes, the championship is the grand plan but there are a few more immediate goals on my list and that is to win the race.”

DALLAS GLENN, KB RACING, RAD TORQUE SYSTEMS CAMARO SS (Fourth in standings; winner of spring race at zMAX Dragway): “This is the part of the year where everything really gets cookin’ but after racing with Jason and Greg all these years, I know the Countdown to the Championship is definitely a marathon in a way and not a sprint. You just have to remain consistent during these final races and you should put yourself in a good spot to win the championship by Pomona. Coming back to Charlotte in the fall is a different feeling knowing I was the winner at the end of Sunday last time we raced here. I’d like to think the RAD Torque/KB Racing has the upper hand coming into this weekend, for sure.”

KYLE KORETSKY, KB RACING, LUCAS OIL CHEVROLET CAMARO SS (Fifth in standings): “Hometown track, Maple Grove. I had tons of support with family and friends. No. 1 qualifier Friday night was great, but we struggled Saturday in qualifying and got bumped back to No. 5. Still a good weekend; qualified top half. I know the Countdown is on, but I try not to think about it. I just go to every race, every round and do the best that I can do and try to win as many rounds as I can because every point counts. We wanted to have a better outcome at Maple Grove, but going into Charlotte I’m confident I’ll have a car that can win the race.”

TROY COUGHLIN JR., ELITE MOTORSPORTS, JEGS.COM/ELITE MOTORSPORTS CHEVROLET CAMARO SS (Sixth in standings): “This race weekend feels a little bigger than normal. zMAX already makes a race feel more important because it’s such a massive stadium and the stands are always packed. Now there’s 10 very good race teams all fighting for one prize, so the excitement is growing every single round. The best way I can show my thanks to everyone who is a part of putting me in this position is to win races, so that’s our goal every single weekend. Charlotte will be no different.”