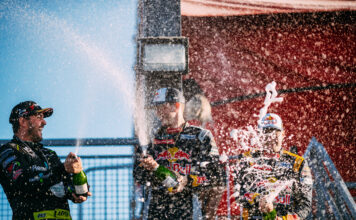 Salt Lake City, UT – GRX Loenbro driver Steve Arpin battled his HempFusion Hyundai i20 to a 2nd place finish to kick off the 2021 Nitro Rallycross season. After seeing his new ride for the first time just a few days prior, Arpin quickly acclimated himself to the new platform during open practice session on Thursday and Friday.

“We couldn’t have hoped for a better way to kick off the 2021 Nitro Rallycross Championship. The GRX Loenbro HempFusion #00 has been like a rocket since the guys pulled it out of the shipping container. It’s been 2 years since I’ve raced in rallycross and it took me a little bit to get used to the differences between this new platform and the Fiesta, but I think we are in a great spot! Pumped to bring home this 2nd place finish!” Steve Arpin

Competition began with a 5th fastest time in solo qualifying placing Arpin in Heat 4 for the forthcoming head-to-head battle rounds. Arpin powered past Robin Larsson in the 1st round and Tanner oust in the 2nd to setup a battle between himself and Travis Pastrana. A 3-lap back-and-forth battle between the two ultimately ended with Pastrana taking the checkered flag first ending day one of competition for the GRX Loenbro team.

Day 2 of competition kicked off Saturday with heat races. Sitting in 3rd place following the conclusion of day 1’s events, Arpin lined up P2 for heat race 2. A tense battle between himself, Travis Pastrana and Andreas Bakkerud ensued following the drop of the green flag. Once the dust cleared, Pastrana and Arpin crossed the line P1 and P2 respectively, moving them directly to the 10-car final. In the final, Arpin’s nearly perfect launch set him up perfectly to take the 100-foot gap jump on lap 1. Arpin ran 3rd through the first few laps behind Kevin Hansen, until Hansen took his joker lap. Arpin focused on his driving and set 2 quick laps before taking the joker himself. Upon rejoining the main track Arpin had gained enough time to comfortably keep 2nd place as the checkered flag waved.

“Obviously, we are really really happy. We started from a blank sheet and managed to continuously improve over the two days. We managed stayed out of trouble and have a decent pace on track and together that brought a us great result. It’s a five-race championship and next weekend is already another round. o its important to put the focus on future events and try to keep up the progress we have made and hopefully we are up there again and can bring home another positive result.” – Jussi Pinomaki

About Loenbro Motorsports
Owned by brothers Paul and Jon Leach, Loenbro Motorsports is the racing team division of Loenbro, a successful industrial construction and services company. Loenbro provides single-source solutions for industrial customers from coast to coast. Its reputation for exceptional performance and a strong work ethic has helped fuel its growth since it was founded in 1998. For more information, visit www.loenbro.com.

About GRX-SET World RX Team:
GRX, led by two-time World Rally Champion Marcus Grönholm, made its maiden full-time foray into the FIA World Rallycross Championship in 2017, having previously run Niclas Grönholm to Finnish Rallycross Championship glory in 2015. Building on that solid foundation, GRX evolved into a full-blown, two-car World RX team with a pair of newly built Hyundai i20s in 2018. Since, the team has scored a best overall result of second in the World RX Teams’ Championship in 2019. The team has also claimed four World RX outright wins, three with Niclas Grönholm in Norway and South Africa in 2019 and Finland in 2020, and with Timur Timerzyanov in Belgium 2019.