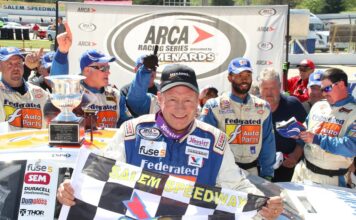 A pair of former USAC Silver Crown Series champions will take to the high-banks at Salem Speedway this weekend for the ARCA Menards Series Sioux Chief PowerPEX 200, the final short track race of the series’ 2021 season.

For one of the former open wheel champions, he will be returning to the site of his 18th and final – for now – ARCA Menards Series victory. For the other, he’ll be looking to make his second career series start as he continues to build his budding resume in full-bodied stock cars.

Ken Schrader, the 1983 USAC Silver Crown champ, used that success to propel himself into a career that included the 1985 NASCAR Cup Series rookie of the year award, four career Cup wins, two Xfinity Series wins, a Camping World Truck Series wins, 18 ARCA Menards Series wins, and hundreds of wins all across the country on both paved and dirt short tracks.

Schrader’s most recent ARCA victory came on the hills at Salem Speedway in 2015. He returns looking to repeat that feat, driving for 1995 series champion Andy Hillenburg’s Fast Track High Performance Racing team. The two have a long history together, both highly successful open wheel short trackers who transitioned to stock cars and tasted success. Schrader was the car owner when Hillenburg won at Daytona in 1995, catapulting him to a championship run. The two most recently teamed up at DuQuoin in September, with Schrader driving to a third-place finish.

Kody Swanson’s career numbers in the Silver Crown division are unmatched. He’s a five-time series champion, and he holds a one-point lead over Logan Seavey headed into the series finale at Toledo Speedway on October 10 as he tries to lock down his record-extending sixth series championship. He is the career leader in series wins with 34, two of which came earlier this season at Lucas Oil Raceway in May and again in July.

Swanson will climb aboard the No. 21 GMS Racing Chevrolet headed up by 2016 ARCA Menards Series championship-winning crew chief Chad Bryant. The two teamed up for Swanson’s only previous series appearance, an eighth-place finish at Iowa Speedway in 2020.

Schrader and Swanson add flavor to what is already a packed weekend at Salem Speedway. The Sioux Chief PowerPEX 200 is the finale for the Sioux Chief Showdown, the championship-within-the-championship in the ARCA Menards Series on short tracks and road courses. Ty Gibbs, the current overall championship leader, maintains a 17-point advantage over Corey Heim heading into Saturday’s 200-lapper. Gibbs was the winner the last time the series raced at Salem in 2019, leading 196 of the race’s 200 laps on his way to what was his second career series win.

The Salem Speedway Great American Stocks will also be in action with a 50-lap feature event, which will take place just after the on-track autograph session for the ARCA Menards Series drivers.