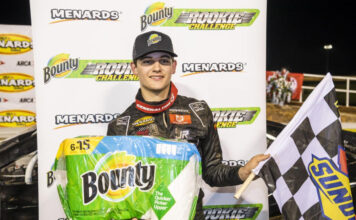 With support and guidance from former ARCA champion Austin Theriault and four-time NASCAR Camping World Truck Series (NCWTS) champion Ron Hornaday Jr., Lewis was able to improve on his seventh-place finish in his ARCA debut at the Illinois State Fairgrounds (Springfield) to lead all 104 laps in his second career start at the 1.0-mile dirt track of the DuQuoin State Fairgrounds.

On the heels of the ARCA upset, the teenager is prepared to take all the knowledge and experience he has inhaled over the past six weeks and turn to the asphalt side of the ARCA Menards Series and do battle in Rette Jones Racing’s No. 30 19th Green | Plan﻿ts Dir﻿e​ ct Nursery and Garden Center Ford Fusion in Saturday night’s Sioux Chief PowerPEX 200.

“The support has been so overwhelming, and I am incredibly grateful,” said Lewis. “I feel like I am living a dream being surrounded by all of these great people and to be able to accomplish what we did at DuQuoin was something I couldn’t have imagined until it actually happened.

“As proud as I am about DuQuoin, I am ready to move forward and focus on the path ahead for me and that includes getting back to ARCA competition this weekend at Salem Speedway.

“Obviously, I don’t have any experience on an asphalt track in ARCA competition, but I’ll continue to be surrounded by great people, including Austin (Theriault), Ron (Hornaday), Joey (Coulter) and Mark (Rette) whom I know will guide me and help make this transition as seamless as possible.”

Lewis graduated to the ARCA Menards Series level on the strength of a successful career in Karting, Legend Cars, Super Trucks and Dirt Modified competition.

He is also the most recent Winter’s Heat champion winning a jaw-dropping nine of the 10 races.

The historic half-mile of Salem is often daunting for any rookie, but Lewis is approaching the weekend optimistic after many hours of studying video of past races and talking to drivers who have had success at the Southern Indiana short track.

“I know it’s going to be a challenge, but I’m ready to accept and conquer that challenge,” added Lewis. “Everything at these higher levels will be a challenge, especially the company that I will be racing, but I am focused and driven and ready to get down to business and see what we can produce on Saturday night.”

Team owner and former ARCA championship crew chief Rette is excited for the opportunity to call the shots for Lewis again.

“I’m so proud of Landen and what he has accomplished in a short amount of time,” sounded Rette.

“As he matures and continues to develop his craft, he is going to mold into an even better race car driver.

“He showcased an inkling of his potential with the victory at DuQuoin and I think he has the potential to duplicate that again on Saturday night. It is not going to be easy, but we are ready to deliver again!”

“We look forward to the opportunity to put Rette Jones Racing in Victory Lane for the third time in 2021.”

The Sioux Chief PowerPEX 200 (200 laps | 100 miles) is the 19th of 20 races on the 2021 ARCA Menards Series schedule. A forty-five minute practice is set from 3:15 p.m. – 4:00 p.m. General Tire pole qualifying is slated for an hour and a half later at 5:30 p.m. The event will be televised live on MAVTV beginning at 8:00 p.m. ET. ARCARacing.com will also stream live timing and scoring throughout the entire weekend festivities. All times are local (ET).