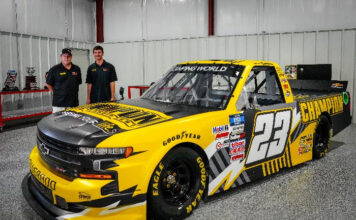 Enfinger, who has six NCWTS wins in his career, will be rejoining forces with a team that has strong ties to the driver from Fairhope, Ala. Over the years, the driver and team pairing have made a lot of history on track in multiple series.

“It’s an honor to be coming back to GMS Racing, the place where I was able to jump start my career in NASCAR. Together GMS Racing and I saw a tremendous amount of success – winning races and championships – and I’m ready to pick up where we left off,” said Grant.

“Champion Power Equipment started our motorsports journey with GMS Racing in 2014, joining forces with Grant’s program at GMS Racing in 2015, and we have never looked back,” said Dennis Trine of Champion Power Equipment. “Year-after-year we are seeing the value that a partnership with not only Grant, but in NASCAR, brings to our company. Our consumers are outdoor enthusiast and we are able to connect with them directly at NASCAR race tracks, allowing us to see measurable growth through the life of the partnership. We look forward to continuing that growth with Grant and the GMS Racing team over the next two seasons.”

The No. 23 GMS Racing team looks to contend for race wins and make a bid for the NASCAR Camping World Truck Series championship with the energy from the strong partnership with Grant Enfinger and Champion Power Equipment. All parties share a common goal in building a program driven by success.

“It’s so great to know where I’m going to be for the next couple of years, as I’m used to finding out around January each season,” continued Enfinger. “To have this deal signed this early ahead of the season is huge for me personally and career-wise, and I can’t wait to get started!”

For more information about Grant Enfinger, please visit his official website, www.grantenfinger.com. Follow Grant on social with his official handle @GrantEnfinger. Stay up to date with news on the No. 23 Chevrolet on GMS Racing’s website, www.gmsracing.net, or follow along on social media with the team’s handle @GMSRacingLLC. #WeAreGMS﻿

Since 2003 Champion Power Equipment has earned a reputation for designing and producing the market’s finest power equipment. From our original headquarters in Santa Fe Springs, California, Champion has expanded its North American footprint to include facilities in Jackson, Tennessee, Milwaukee, Wisconsin and Toronto Canada.