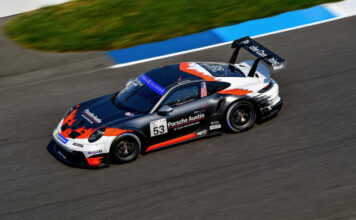 The team moved into their race shop at the VIRginia Motorsport Technology park on the grounds of the race track last November. Saturday’s Michelin GT Challenge at VIR features only the GT LeMans and GTD classes of the WeatherTech SportsCar Championship in a two-hour, 40-minute race that begins at 12:10 p.m. EDT on Saturday and can be seen live over the air on NBC. The team’s two-car Porsche Carrera Cup effort races in a pair of 45-minute races live on IMSA.com/tv, at 3:30 p.m. on Saturday, October 9 and at 12:15 p.m. EDT on Sunday, October 10.

The No. 88 Richard Mille/GridRival Porsche 911 GT3 R will once again be co-driven by team owner Rob Ferriol and Katherine Legge. The duo is coming off arguably their strongest overall performance of the season on the temporary street circuit at Long Beach.

“There are certainly positives and negatives to this weekend at VIR,” Ferriol said. “Obviously, we know the track well and it’s our favorite. Having friends, family and partners here is fun. But we need to make sure we keep doing what we’ve been doing and not overdrive our No. 88 Richard Mille/GridRival Porsche 911 GT3 R just because we want a strong result. All that said, we have the opportunity to pull everything together that we’ve been working on this season but the rest of the GTD field isn’t going to pull over and just let it happen.”

Legge understands the importance of the home race for the team, but is focused on continuing the momentum that the team has carried through the past several races. The Team Hardpoint Porsche finished eighth at WeatherTech Racway Laguna Seca and ninth at the Long Beach Grand Prix, both times improving significantly from the start of the race.

“I am really looking forward to the home stretch, figuratively and literally,” Legge said. “VIR is the team’s home race, and the next time out at Road Atlanta is my personal one. We have done a few miles of testing at VIR so I feel more relative comfort and confidence going into this one. That, coupled with the fact the team, drivers, and car continue to get stronger each outing, gives us renewed excitement. I think the whole team are all buoyed by momentum going into the remaining two races. VIR is such a neat track, and I enjoy driving there very much, I have had some epic battles and some great results in the past and want nothing more than to repeat the same this year. Rob and I are still hungry for that elusive podium and we will be pushing as hard as ever to get it here!”

In Castro’s last appearance during the Porsche Together Fest tripleheader at Indianapolis Motor Speedway, he piloted his No. 65 Fine Fare Supermarkets/GoDominicanRepublic.com Porsche 911 GT3 Cup to a pair of wins in the Pro-Am class. Those gold medals were his second and third wins of the season and his eight podium finishes in 11 of 16 races have him secure placed in the second slot of the season-long point championship.

Dickinson earned two additional overall podiums at Indianapolis, bringing his total to five in the first 11 races in the ultra-competitive Pro class of the championship. Dickinson’s runner-up finish in the No. 53 Porsche Austin/Team Hardpoint Porsche 911 GT3 Cup during race one at IMS was a season best, and opens the door to a strong finish this weekend at the team’s home race.

“I’m really looking forward to this weekend,” Dickinson said. “VIR is such a rewarding track to drive on, there are so many areas where the smallest of margins can and will have a huge impact on the overall lap time. We have some weather in the forecast, which will only mean that the Porsche Carrera Cup North America racing will be even more intense. I can’t wait to go and represent Team Hardpoint at our home race!”

-The Team Hardpoint paddock and pit box will have extra visitors during this weekend’s Michelin GT Challenge at VIR.

Michelin is bringing a group of U.S. Army soldiers from nearby Fort Bragg to Saturday’s race as part of the base Better Opportunities for Single Soldiers (BOSS) program. The 10 soldiers will, among other things, visit the Team Hardpoint transporter and race shop throughout the day, and get to see some of the race from the Team Hardpoint pit box. The military connection is important to Team Hardpoint, as Ferriol served eight years as an enlisted Intelligence Specialist in the US Marine Corps, followed by another five years as a government civilian with Joint Special Operations Command (JSOC). Across his 13 years of government and military service, he has deployed to multiple conflict zones around the globe in support of US counterterrorism operations, including Iraq, Afghanistan, South America and Africa. Jason Link, Team Hardpoint’s General Manager, served in the US Army for 14 years, including four years as an infantryman with the 3/75th Ranger Regiment and for 10 years as an Operator with the 1st SFOD-D (Delta Force), and other members of the team’s crew have military experience as well.

About Team Hardpoint:
Hardpoint Motorsports was founded by Rob Ferriol in 2018 with the vision of combining his experience as a successful entrepreneur with his passion for racing. Headquartered at VIRginia International Raceway, the team’s 2021 plans include a full-season effort in the IMSA WeatherTech Sports Car Championship in a Porsche 911 GT3 R and a multi-car effort in the IMSA Porsche Carrera Cup North America. More information on Hardpoint Motorsports can be found at www.hardpoint.com or through its strong social media presence on Facebook, Instagram and Twitter.