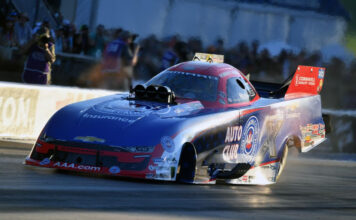 BRISTOL, Tenn. (Oct. 17, 2021) – Another semifinal appearance and bonus points accumulated in qualifying at the Thunder Valley Nationals were beneficial to Brittany Force in her quest for a second National Hot Rod Association (NHRA) Top Fuel championship.

Force reached the semifinal for the second consecutive event after qualifying third and setting the Bristol Dragway speed record in the Flav-R-Pac Chevrolet dragster. The 2017 NHRA Top Fuel titleholder remained second in the standings heading into the penultimate event of the Countdown to the Championship Oct. 29-31 at The Strip at Las Vegas Motor Speedway.

“Overall, happy with our semifinal finish,” said Force, whose 333.58 mph pass in in the third round of qualifying reset the track Top Fuel record. “This Flav-R-Pac/Monster Energy team stayed No. 2 in points and we’re looking forward to Vegas.”

Teammate Robert Hight advanced to the Funny Car semifinals in the Automobile Club of Southern California Camaro SS. John Force, driving the PEAK Antifreeze & Coolant Camaro SS, fell in the quarterfinals. He is tied for fourth in points.

The last of eight races in the Constant Aviation Factory Stock Showdown will also be conducted. Aaron Stanfield, driving the Janac Brothers Racing Chevrolet COPO Camaro, locked up his second consecutive championship a few weeks ago at Madison, Illinois.

BRITTANY FORCE, JOHN FORCE RACING, FLAV-R-PAC CHEVROLET DRAGSTER (No. 3 qualifier, fell in semifinals): “I was really proud to be running this Flav-R-Pac car at my favorite race on the circuit, the Thunder Valley Nationals. We made some good passes all weekend long, starting Friday night. We had a few issues going rounds today and the boys had a lot of work, but they pulled it together and git us to that starting line.”

JOHN FORCE, JOHN FORCE RACING, PEAK ANTIFREEZE & COOLANT CHEVROLET CAMARO SS (No. 6 qualifier, fell in quarterfinals): “Not what we were looking for today. Bit of a rough go through the whole weekend. We’re still in the hunt though. Two races left, points and a half in Pomona. We’ll be good. Still have some fight in us.”

ROBERT HIGHT, JOHN FORCE RACING, AUTO CLUB OF SOUTHERN CALIFORNIA CHEVROLET CAMARO SS (No. 5 qualifier, fell in semifinals): “We qualified well this weekend. We put up some good runs, thought we had a competitive Chevy. We got outrun today, wish things were different. But we’re still out here to win. There are two races left in the season and we’ll be out there just like everyone else looking for wins.”