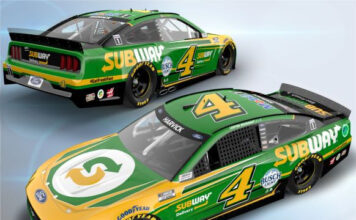 ● Subway® restaurants has joined Kevin Harvick and the No. 4 team of Stewart-Haas Racing (SHR) to put its Eat Fresh Refresh™ on the fast track by becoming a primary sponsor of the championship-winning NASCAR Cup Series team. The world’s largest quick-service restaurant brand is leveraging the partnership to highlight Subway Delivery powered by DoorDash, which allows guests to order their Subway favorites via the Subway app or on Subway.com. Guests can buy one Footlong and get another Footlong for 50 percent off using code KEVIN50 when they order delivery online or in the Subway app. (Limit one at participating restaurants.) Subway has a $0 delivery fee on all Subway Delivery orders and guests can still earn and redeem Subway MyWay® Rewards points.

● Dorothy was right. There’s no place like home. And for Harvick, home is an intermediate racetrack. With apologies to those in Harvick’s hometown of Bakersfield, California, the veteran racer has made the intermediate tracks that comprise the majority of the NASCAR Cup Series schedule his home. Of Harvick’s 58 career NASCAR Cup Series wins, 23 have come at intermediate-style racetracks. Kansas is a sweeping, D-shaped oval that has produced high speeds and daring, side-by-side racing since its debut in 2001. Harvick has competed at the track for every one of its Cup Series races – one of only three drivers to do so (Kurt Busch and Ryan Newman being the others) – and has amassed quite the history in his 31 career starts. Three wins, five second-place finishes, 10 top-threes, 11 top-fives, 18 top-10s and 949 laps led make Harvick one of the most successful drivers in Kansas’ relatively young history. His average start is 13.2, his average finish is 9.1 and he has a lap completion rate of 98.7 percent.

● Harvick scored his first NASCAR Cup Series win at Kansas in the 2013 Hollywood Casino 400 with a massive 1.140-second margin over runner-up Kurt Busch. Harvick scored his next Kansas win in the 2016 Hollywood Casino 400 with another impressive performance, crossing the stripe 1.183 seconds ahead of next best Carl Edwards. Harvick’s most recent Kansas victory came in May 2018 when he beat Martin Truex, Jr., by .390 of a second.

● Harvick has completed the second-most laps of any driver this season (8,070). Only Hamlin is ahead of Harvick in this category with just 46 more laps completed (8,116).

● Harvick is good at Kansas even outside of the NASCAR Cup Series. He has six top-fives across 11 NASCAR Xfinity Series starts at the 1.5-mile oval, with the highlight being a victory in September 2006.

● Harvick’s No. 4 Subway Delivery Ford Mustang will carry the name of Lester DeVooght above the driver’s side door during the Hollywood Casino 400. DeVooght was an avid supporter of Harvick and his family nominated DeVooght as their Cancer Hero via a collaboration between the Martin Truex Jr., Foundation and the NASCAR Foundation. DeVooght courageously battled cancer after his first diagnosis in late February 2019 of duodenal adenocarcinoma, a rare but fast-spreading cancer of the small intestine. He finished his chemo and radiation treatments in August 2019 and had a short reprieve before his cancer returned in April 2020. Sadly, DeVooght passed away on Oct. 4, 2020. Throughout his battle, the Findlay, Ohio-native remained a staunch follower of NASCAR and Harvick, in particular. Sunday at Kansas, DeVooght gets his name on the car he cheered for on countless Sundays.

Kevin Harvick, Driver of the No. 4 Subway Delivery Ford Mustang for Stewart-Haas Racing

Consistency has been a hallmark of your season and you’ve talked about how you’ve had to grind all year long to get the best finish possible. Is this a testament to your 21 years as a NASCAR Cup Series driver and your eight years together with the No. 4 team of Stewart-Haas Racing?

“I feel like the experience of our team has carried us through this year because we know how to race for eighth to 10th and finish eighth to 10th. And we know the scenarios, when to gamble and when not to gamble. And I think our team has done a great job of executing all the details of the season, and that’s what’s kept us in the game.”

Heading into your first race at Kansas earlier this year, you and your crew chief, Rodney Childers, talked about how you needed to approach the race differently to overcome the loss of downforce your car had compared to last year. Can you provide some insight into what you had to do behind the wheel to get that second-place finish?

“It was a combination of things. I think it was a change in thought process. I think it was a great gamble on the call at the end of the race to come and get tires. I think a lot of things just changed that weekend for a better direction and we got a good finish out of it.”

You’ve raced at a good amount of mile-and-a-half tracks since you last competed at Kansas. As the year has progressed, have you also seen progress in your mile-and-a-half program?

“We’ve definitely still got a deficit to some of the cars that we’re racing against, but we’ve definitely made up ground on the performance side and just have a better idea of where we need to be to just keep us in the game.”

Your history at Kansas is impressive. Three wins, five second-place finishes, 10 top-threes, 11 top-fives, 18 top-10s and 949 laps led across 31 career NASCAR Cup Series starts. What makes you so good there?

“I think Kansas has been a great racetrack and, really from a driver’s standpoint, a fun racetrack because of the fact that it’s worn in so well. You can race at the top of the racetrack, which is the preferred groove as the tires wear out. It’s faster at the bottom of the racetrack on new tires. But as a driver, having options is something that is a lot of fun. As they repave Atlanta and you look at some of the other racetracks, really Kansas is going to be one of the more unique racetracks because of the fact the asphalt and the shape of the racetrack is so driver-friendly as far as where you can drive on the racetrack. You can literally drive from the wall to the apron all the way around the racetrack. So, it’s a fun racetrack. It’s been good to us and, hopefully, we can continue that trend on Sunday in our Subway Delivery Ford Mustang.”