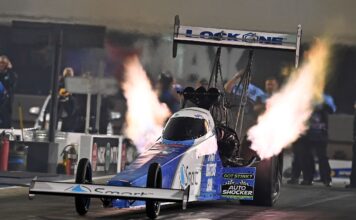 “We are excited to have Justin Ashley with us as we broaden our business portfolio,” said Ryan Johnston, President and CEO of InterPhase Entertainment. “Justin is a highly marketable young driver who is a standout, and as far as I’m concerned, the future of the NHRA Camping World Drag Racing Series. Justin just not only won in Texas a few weeks ago, but he just broke the track record in Bristol with a blistering 334.48 mph run in 3.69 seconds. We are looking forward to diversifying and building his brand around the world.”

The two-time NHRA national event winner is a second-generation driver from Plainview, NY. At twenty-six years old, he is a future star in the Top Fuel ranks of the NHRA. During his rookie season of 2020 Justin was hyper-focused on being his best, producing the quickest average reaction time in the Top Fuel class and finishing the season in the Top Ten.

When Ashley isn’t at the track, he serves as President of Ashley Developers, a real estate investment organization dedicated to the rehabilitation of distressed properties. He spends his days searching for new properties and overseeing the improvements made to his current holdings.

“Joining the InterPhase Entertainment team gives our race program the best opportunity for sustainable success on and off the racetrack,” said Ashley, who has been instrumental in securing sponsorship deals the past two years. “The NHRA Camping World Drag Racing Series is a tremendous value, and our plan has always been predicated on communicating that value, structuring a strategic business plan, and building a brand that ensures successful return on investment. InterPhase Entertainment is going to help us take our game to the next level by doing that tenfold. I cannot wait to begin our relationship together.”

InterPhase Entertainment, LLC has amassed over a decade and a half of experience in motorsports all around the world between the NHRA, NASCAR, IndyCar, Formula 1 and even the X Games. They bring a wealth of knowledge on how to bring in sponsors in not only the traditional marketing approach, but more so in the business-to-business aspect of aligning companies to benefit in earning new sales, while enjoying motorsports as an activation platform. InterPhase Entertainment not only works within the industry of motorsports, but within the industries of film, television, music, tech, space, defense, exploration, underwater archaeology, gold mining, and into retail.

The National Hot Rod Association is the largest auto racing organization in the world. The NHRA competes in major U.S. markets, and the racing runs the gamut from 11,000 horsepower Top Fuel dragsters to 5 horsepower Jr. dragsters. In 2020, the NHRA joined forces with Camping World to present the world’s fastest motorsports attraction as the flagship sponsor of the national touring series, the NHRA Camping World Drag Racing Series.