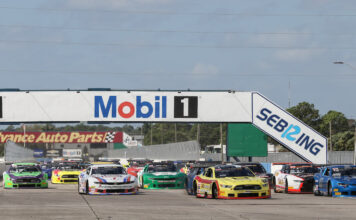 MIAMI, FLA. (27 October 2021)- Following a compacted season in 2020 due the pandemic, the Trans Am Series presented by Pirelli has bounced back in full force in 2021 and recently set a significant new milestone for the TA2® class.

After breaking an all-time class entry record in August at the Big Machine Music City Grand Prix with 38 TA2 drivers taking to the streets of Nashville, the class has set a new benchmark for the season-finale. The Heacock Classic event at Circuit of The Americas has attracted a blockbuster entry with 50 TA2 machines set to take the green for the 100-mile race on Sunday, November 7.

The burgeoning field brings the TA2 competitor count to 406 between the National, West Coast and ProAm divisions for 2021, reaching an all-time high for the class.

The Trans Am Series presented by Pirelli West Coast Championship has seen the most growth this season, with an 85 percent increase in TA2 entries over 2020.

“TA2 represents the best value platform in racing, with engines capable of lasting an entire season and cost control measures that allow drivers to fully focus on racing, not the financing of it, while showcasing their talents and skill,” said Trans Am Race Company President John Clagett. “I believe this is what makes the class so attractive to competitors. Keeping the TA2 class the high performance, low cost platform it was founded upon is important to us and that’s why we’ve seen unprecedented growth in the class this season.”

The TA2 class harkens back to the “Muscle Car Wars” of the 60s and 70s, with fields featuring the Ford Mustang, the Dodge Challenger and the Chevrolet Camaro racing side-by-side each event weekend in a 100-mile showdown.

The class combines the prowess of a purpose-built racing platform and the unmistakable silhouettes of today’s muscle cars tailored to the high-intensity that sprint format racing delivers.The class is also equipped with the affordable TA2 Choice powerplant removing the variable of power among competitors and adding even more importance to what the drivers do behind the wheel.

This format, paired with a high level of competition as well as a ruleset that prohibits driver aids and puts the racing in the drivers hands, the Trans Am TA2 class continues to be the choice for a growing number of drivers looking to develop their road racing skills, including those looking to race their way to NASCAR glory, drivers like Connor Zilisch.

“I chose TA2 because the series has always been intriguing to me, the competition and the car that is provided makes for some incredible racing,” explained Zilisch. “It also is a great stepping stone to many forms of professional motorsports. It felt like the right choice for me for what I hope to do in the future.

“I really liked the TA2 car’s power,” continued Zilisch. “Until I drove it, the most horsepower I’ve had in a car was no more than 150. To jump straight into something with 500 horsepower was obviously a big jump, but that is what made it fun. Having to control the throttle on the exit of the corner was something new to me, I picked it up quickly though, and soon felt very comfortable in the car.”

Zilisch isn’t the only driver to see the development value in TA2.

“I first got introduced to TA2 back in 2015 through Justin Haley,” said Silver Hare Racing General Manager and NASCAR Xfinity driver and coach Michael Self. “I remember getting in his car for a few laps at Sebring and thinking, ‘Man, this is just like driving a NASCAR K&N car. I can’t believe more guys aren’t utilizing this. The package in terms of the transmission, brakes, tires and components are really important to utilize properly when trying to be a good road racer,” Self continued. Since then, I’ve vouched for the TA2 cars with everyone I talk to that wants to improve their road racing for NASCAR competition purposes, and I believe the results have continued to speak for themselves. As far as I’m aware, there’s still nothing else out there that translates to a NASCAR Cup or Xfinity car, or ARCA like the TA2 car does.”

The National TA2 Wilwood Rookie of the Year, Rhett Barkau is just 19 years old. After winning an SCCA national title, Barkau moved into TA2 this season with his ultimate goal of racing in NASCAR.

“The Trans Am cars are so fun to drive and are a true American muscle car,” said Barkau. “TA2 is one the most competitive classes in racing, and my ultimate goal is to race in NASCAR. TA2 is the closest class in the nation that can prepare me to move up through the NASCAR ladder. I am hoping Trans Am will open doors into the NASCAR world.”

The Trans Am TA class has served as a launching point for several famous drivers over the years. Drivers like Willy T. Ribbs, Wally Dallenbach Jr, Scott Sharp and Scott Pruett, among others, all got their road racing start in Trans Am. The class has also showcased breakthrough talents like Ernie Francis Jr. After winning seven consecutive Trans Am titles, the 23-year-old caught the eye of Ray Evernham, who put Francis Jr. in the new Camping World SRX Series to compete against several NASCAR and IndyCar legends. His outstanding performance in the series gave Francis Jr. global recognition which has led to additional opportunities, like an Indy Lights test during the Chris Griffith Test at the famed Indianapolis Motor Speedway this week, for him to ascend up the motorsports ladder.

Next season, Trans Am will celebrate its 55th season with a diverse 12-race schedule that will include multiple road courses, a roval and a street circuit, an ultimate mix of legendary circuits around the nation that will test the skills of any driver. (View 2022 Schedule)

Trans Am returns to racing for its season finale at Circuit Of the Americas November 5-7 for the Heacock Classic. For tickets visit: Trans Am – America’s Road Racing Series (gotransam.com)