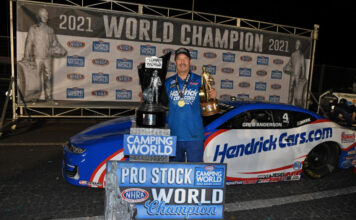 ﻿DETROIT (Nov. 17, 2021) – Greg Anderson, who prefers to look down the dragstrip instead of behind, recalls April 29, 2001, like it was the most recent event on the National Hot Rod Association (NHRA) tour.

When Anderson won his initial Wally in NHRA Pro Stock competition that spring Sunday in Bristol, Tennessee, it sent a shock wave through Thunder Valley that reverberates to this day.

“I was just thankful to be on the racetrack and have the chance to drive a Pro Stock car. I never even realized I could win an event. It was the beginning of a lot of great days to come,” he said.

Anderson, who shared in the on-track success of Warren Johnson as his crew chief before getting behind the wheel of a Pro Stock machine in 1998, went on to roll to Pro Stock world championships in 2003, ’04 and ’05 among a basketful of accolades in his KB Racing-prepared cars. He claimed the fourth title of his career in 2010 – the same season that Johnson won for the 97th and final time in his career.

“At the time, winning that first race was the coolest thing that ever happened to me,” he said. “It was the start of something really special. It just shows you what hard work can do.”

His work ethic didn’t diminish over the next decade and wins continued to pile up, though a fifth title eluded Anderson — until Nov. 14 at Auto Club Raceway. Anderson drove the HendrickCars.com Chevrolet Camaro SS to victory in the 2021 season finale to cap a dominant year reminiscent of 2004 when he garnered 15 wins in 19 final rounds.

Anderson joins Bob Glidden (10), Johnson (6) and Jeg Coughlin Jr. (5) as the only five-time world champions in the 51-year history of NHRA Pro Stock competition. Chevrolet, which won the first Pro Stock race in 1970 at Auto Club Raceway, earned its 17th Pro Stock driver championship to go along with 346 victories, including 228 with the Camaro nameplate.

Since winning the opener at Gainesville, Florida, in March, Anderson didn’t relinquish the points lead.

“It’s been a magical season in so many ways and for so many reasons,” said Anderson, who in October passed Johnson to become the winningest driver in Pro Stock and also moved to second in all pro classes with 881 round wins. “This one really means a lot to me.”

Anderson, who registered 12 No. 1 qualifiers in the 17 races, advanced to the final round nine times. His fifth victory of the season – over KB Racing teammate Kyle Koretsky – boosted the win total to 99 in 167 final rounds over 496 races. Only 16-time Funny Car champion and fellow Chevrolet driver John Force (154) has more victories in the pro classes.

“My HendrickCars.com Chevy is just bad to the bone. Every race I went to I had a great chance to win that race,” Anderson said. “I’m very proud of everybody on the KB Racing team and so grateful to our team owners, Ken and Judy Black. We definitely came prepared to race, and it paid off in the best possible way.

“It’s pretty incredible. It’s been a special year and to get to that number and one away from 100 – that’s the milestone we’re looking for. We passed by Warren Johnson, my mentor and a guy who taught me so much, a couple of races ago, and now 100 is the goal. And I don’t want to stop there.”

Anderson, 60, will have the opportunity to hit that mark in the 2022 season opener Feb. 20 back at Auto Club Raceway.