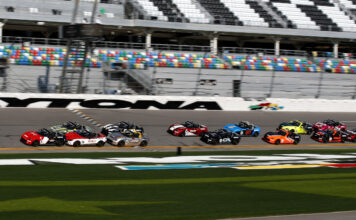 January 24, 2022 – After a tremendous 2021 season that produced incredible racing, photo finishes, and a thrilling fight for the championship, the Idemitsu Mazda MX-5 Cup presented by BFGoodrich® Tires is ready to back it up with another season of amazing racing in 2022. Preparing for a second season under IMSA sanctioning, the quest for the $250,000 championship prize season begins this week at Daytona International Raceway as part of the legendary Rolex 24 At Daytona event.

Last year’s Idemitsu Mazda MX-5 Cup races at Daytona were a sight to behold. The amount of drafting on the high banks of the oval created constant position changes all race long, building to a dramatic four-wide drag race to the finish in Round One. The winner of that race: the new Mazda MX-5 Cup Champion, Gresham Wagner (No. 5 Spark Performance).

Wagner comes into the season opener with no pressure and approaches the first two races of the year the same way he’d approach a title-deciding race.

“I’m just as relaxed as always,” Wagner said. “I sometimes have a bit more at stake in certain parts of a season than at the beginning, but I’ve never let any points or expectations determine how I race. I’ve always had confidence in myself and that brings a more relaxed and fun atmosphere to everything. At a certain point, each race just becomes another race.”

This is most definitely not just another race for the more than 10 rookies entered in the field, including the most recent winner of the Mazda MX-5 Cup Shootout, Connor Zilisch (No. 72 Hixon Motor Sports).

“I’m really looking forward to working with my new team, Hixon Motor Sports,” Zilisch said. “I think together we will be able to accomplish a lot and I’m excited to get to work with all of the crew and the drivers. I think that Daytona this year will be a ton of fun. With that being said, I know that we need to start the season off well to get the ball rolling. I’m expecting consistent top five results throughout the weekend to keep me up front. I think if I can do that I’ll be satisfied.”

Two other drivers were awarded $75,000 scholarships at the Mazda MX-5 Cup Shootout and will be on the grid as rookies at Daytona: Bryce Cornet (No. 65 Hixon Motor Sports) and Laura Hayes (No. 22 Thunder Bunny Racing).

Each MX-5 Cup car is built in Daytona Beach at Flis Performance. Having a single builder creates remarkable parity across the vehicles and contributed to an average margin of victory of 0.627-second last season. The two race finishes at Daytona were no exception at 0.108-second and 0.13-second, respectively. Even on the final lap it was hard to predict who would be the winner thanks to the huge drafting opportunity in the final turn.

“I think it was pretty clear to see you don’t want to be leading going onto the banking of NASCAR Turns 3 and 4,” Zilisch said. “Selin [Rollan] and Preston [Pardus] tried it last year and ended up 7th and 8th. It’s obviously going to be a lot of strategy that we are going to need to go through as a team.”

Wagner was third entering the final turn last year but used the draft from Rollan and Pardus to launch into the lead. The move was not part of a master plan from Wagner.

“I don’t think there is an ideal position to be at the end,” Wagner said. “I think you can win from 1st or 5th, just depending on what everyone else decides to do. You can never plan for what other drivers are going to do, you just have to race your own race and try to be somewhere near the front at the end. The rest just has to be sorted out in the moment. When I won last year at Daytona, I didn’t even realize it was the final lap.”

Following Wagner across the line was the eventual Rookie of the Year, Sam Paley (No. 28 McCumbee McAleer Racing). It was the first of several podium finishes for Paley en route to his $80,000 rookie prize from Mazda, but the young talent is still in search of his first win and could get it done this weekend at Daytona.

No doubt after last year’s races, more eyes than ever will be on the 31 MX-5 Cup cars taking the green flag at Daytona. Like last year, those not at the track will be able to stream both races live on IMSA.com/tvlive with commentary from IMSA Radio’s John Hindhaugh and Shea Adam. New this year, however, fans can follow the stream on RACER.com as well as on the Peacock app.

Thursday’s Round One race is slated to go green at 5:30pm ET, while Friday’s race will begin at 10:15am ET. Live timing for all sessions is available at MX-5Cup.com.