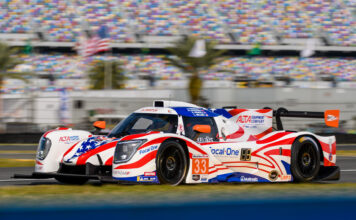 DAYTONA BEACH, Fla. (26 January 2022) – Sean Creech Motorsport (SCM) comes to theRolex 24 At Daytona with an outstanding lineup of veterans and youngsters eager to make their mark at the legendary endurance classic – and ready to absorb the wisdom and knowledge available to them.

Both youngsters have extensive backgrounds despite their young ages – Jakobsen, from Denmark, began karting at the age of 3, won the Danish F4 title and has driven the LMP3 car in the European Le Mans Series while Priaulx, from Guernsey, UK, started karting at 8, finished second in the 2017 Ginetta Junior series and seventh in the British F4 Championship before heading Stateside, where he won the 2021 Porsche Carrera Cup North America title.

While Priaulx’s and Jakobsen’s combined ages still don’t add up to those of each of their co-drivers, both agree that the opportunity to learn the nuances of a 24-hour race from two drivers who have raced a combined 30 Rolex 24s will be key to their success.

“We have learned so much from them already, but I think this week, as we get into the race, we’ll learn even more,” said Jakobsen. “I don’t know what to expect, I’ve only done four-hour races up til now. João has told us that we need to stay as fresh as possible between stints, get some rest instead of sitting in the box – getaway if you can, and focus on your own stuff so you’re ready for the next time you get into the car. If you don’t do that, by the end of the race you’ll just be mentally and physically finished – because it’s not just a 24-hour day. From getting up Saturday, the autograph session, all the stuff before the race to the end of the day Sunday, it’s a long time. So wisdom like that is really good to get from someone like João.”

“It’s the small things,” said Priaulx. “There are so many small but critical things that you don’t know when you’re doing a 24-hour race for the first time. Knowing what to do when you come into pit lane, how to manage the car when it’s cold out at night and you’re on new tires – all the stuff you don’t think about when you’re not used to it. Things won’t always go your way but you keep fighting, because it’s not a sprint race – a lot can happen in 24 hours. I want to win it, but it’s a balance: you have to go into it with 100% commitment but 100% restraint. You can’t just hope for the best, you have to put the work it – you can’t underperform. We all have to be on our “A” game.”

SCM tested several notable young drivers late last year and chose Jakobsen and Priaulx as the best duo to join the team. Barbosa and Willsey saw in both drivers the youth, enthusiasm and outstanding ability that they were looking for, and believe the future is bright for both.

“I see huge potential in both Malthe and Seb to be future stars in this sport,” said Barbosa. “They are very good drivers and they have a great attitude. Malthe might be young, but he’s got more laps in these cars than I do and he is so mature, while Seb has already shown how quick he is, winning the Carrera Cup. I don’t need to tell them what to do on-track, it’s more about what to do in the kinds of race situations that they’ve never encountered before – driving at night, waking up at 3am to go do a double stint.

“Those are the things which can help speed up their learning process, as we’ve done this a few times before so we can help their transition a bit easier. When I was starting out, I learned from guys like Hurley Haywood and Andy Wallace, and they made my life much easier so I’m passing that along. It’s fun to drive with guys like this, with so much passion. We have one of the best lineups out here, so I feel good about our chances.”

“João has been interacting with them from the start regarding the driver’s skill set, while I’ve stressed to them the physical conditioning aspect of it,” said Willsey. “We’re going to expect a lot of them and neither of them has done this yet. It can be very difficult, with so much coming at you from so many directions. It’s been great to bring these two young men on board, to one of the biggest stages in the world – they’re fine young men, and they’re very quick in a race car.”

The Rolex 24 at Daytona takes the green flag this Saturday at 1:40 p.m. Eastern. The race will be broadcast live in the U.S. on the NBC family of networks (NBC, USA and streaming at Peacock TV), while international viewers can watch via IMSA.tv. IMSA Radio will also be available at IMSA.com.

About SCM
Team leader Sean Creech has competed in a multitude of sports car series from 1990 until the present day, including Group C, IMSA GTP, WTSCC, Grand-Am, SRO World Challenge, and IMSA. SCM moves to the WeatherTech Series in 2021 with João Barbosa and Lance Willsey.