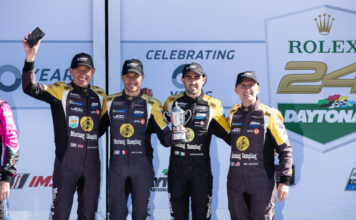 DAYTONA BEACH, Fla. (Jan. 30, 2022) – Taped front and center in the JDC-Miller MotorSports hauler is a big, bold and inspirational message for the four drivers of the No. 5 Mustang Sampling Cadillac DPi-V.R and crew. Believe.

It is a reflection of the passion of the entire organization, which in the 60th Rolex 24 At Daytona – and every IMSA WeatherTech SportsCar Championship race – lives by the credo of when you all pull together, you move as one.

“It makes it bittersweet, but what a great job by the team overall,” said Vautier, who earned his first Rolex 24 podium finish in the DPi class. “We were in contention the whole way and probably the fastest car all the way to the end, so that’s what makes it feel bittersweet because we thought we could have gotten it.
﻿
“But, overall, my first podium in the Rolex 24. Big thanks to the team for the hard work over the winter to make us so competitive. We didn’t get a Rolex but we can still celebrate.”

The No. 48 Ally Cadillac DPi-V.R returned to the garage in the 13th hour after being bumped off course. Minutes later, the No. 01 V-Performance Academy Cadillac DPi-V.R – the overall leader at the time – pitted for fuel and tires with Sebastien Bourdais behind the wheel. The call was made to head to the garage to address an electrical issue. Both cars returned to the race to collect season championship points.

Loic Duval: “Happy about our race in general, but we had it. I think we were the only Cadillac able to win the race. I was able to catch up (after being pushed off course on late restart) but I was way too far away. Frustration because I think we had something. The whole team tried everything we could.”

Richard Westbrook: “We had a 20-second lead and it was all comfortable. We know with IMSA racing that you can never sit on your laurels. There’s always going to be a yellow. It was just bad luck. They (IMSA) didn’t give us the opportunity to pit and the two Accuras did (just before a yellow flag) and it changed the nature of the race. Up to that point, it looked like we had it covered. I’m just proud of this team getting a podium. It’s a great start to my DPi journey.”

Tristan Vautier: “It makes it bittersweet, but what a great job by the team overall. We were in contention the whole way and probably the fastest car all the way to the end, so that’s what makes it feel bittersweet because we thought we could have gotten it. But, overall, my first podium in the Rolex 24. Big thanks to the team for the hard work over the winter to make us so competitive. We didn’t get a Rolex but we can still celebrate.”

Ben Keating: “What an incredible race that was run by the team. We were there at the end because of how consistent we were. If we wouldn’t have had any of those yellow flags at the end, we would have won it. We had a 20-second lead because we were consistent without any mistakes. The No. 5 Mustang Sampling Cadillac was incredible to drive and I’m excited to be on the podium in the Rolex 24. My time behind the wheel was the most fun I’ve ever had in a race car.”

Pipo Derani: “We tried and unfortunately it didn’t happen this time. At least we were there to put up a good fight at the end. We had no pace after that last restart. We have to analyze why. A big thank you to Whelen Engineering, Cadillac and the Action Express Racing team. It is good points for the championship. We finished the race flawlessly without any problems. Just a shame we wanted a little bit more. We will focus on Sebring and the Championship. Tristan did a great job in his first race with us and I am looking forward to working with him leading up to Sebring.”

Tristan Nunez: “For my first race with the team in the Whelen Cadillac and it is hard to ask for more with a fourth-place finish. Obviously, we want to win, but the car is in one-piece and we have a long season ahead. Last year they didn’t have that great of a 24 and won the championship. We have a long season ahead of us and lots of races to look forward to.”
Mike Conway: “Like Pipo said we were struggling there at the end with grip. We were hoping to duke it out upfront and at least have a go. After a few laps we couldn’t quite stay there. It was a great effort by the Action Express team. We had really good pace all race. Then we kind of fell a bit short. Credit to everyone on Whelen Cadillac for the work over the last two weeks. We were hoping for at least a podium, but it wasn’t to be.”

Jimmie Johnson: “All in all, we had a reasonable Ally Cadillac and a reasonable opportunity to win. I was overtaking a P2 car into the night. My right rear tapped his front going into the Esses in Turn 2, and with that touch it broke the rear suspension and sent me off spinning into the grass. That is where we lost all of our laps. I went through there 50 or 60 times through the course of the weekend and that one time I tapped another car and broke the Ally Cadillac. Every lap matters for us. We are not regulars. For Action Express and Hendrick Motorsports the more reps we get behind the wheel the better we will be.”

Kamui Kobayashi: “Obviously, it was a shame not to be fighting with the leader. I think we had a good pace. I think we had the potential to fight, but maybe not to win. I think for the 24 we had a good run with Jimmie, Jose Maria and Mike. The team did a great job. We did our best. Ally and Action Express gave us a good car. This has been my first race of the season for the last couple of years and puts me into a good mood for the season. Thanks to the team and IMSA for a great couple of weeks.”

Mike Rockenfeller: “Like I said before the race, you can win or you can be last. I mean you have to stay so clean here you have to make it through the night. We got caught up in traffic and had an incident there. It is part of the game. You overtake so many cars so many times in your stint, sometimes you get squeezed and there is a little touch. It took a while to repair and you cannot recover. We had a good Ally Cadillac and everyone worked hard and drove good. We will come back and try again at Sebring.”

Jose Maria Lopez: “The Action Express boys did a great job with the car and on pit lane today. The Ally Cadillac had good speed throughout the race. We had some bad luck with contact with Jimmie, but the team was able to make the repair and get us back in the fight. This is such a great race, I had a great time running my first race at Daytona. It was an honor to race with Jimmie and my friends Rocky and Kamui.”

No. 02 Cadillac Accessories Cadillac DPi-V.R (Chip Ganassi Racing)
Earl Bamber, Alex Lynn, Marcus Ericsson, Kevin Magnussen
Finish: Sixth in class; 12th overall (-27 laps)
Alex Lynn: “I guess heartbroken doesn’t sum it up enough. Mostly I believe our Cadillac was the car to win, but that is endurance racing. So many times, 24-hour races can break your heart, but it’s that one time when it goes seamlessly that makes it worth it. We will be back to try again. A big thank you to everyone because the car was faultless and yeah, we won’t give up.”

No. 01 V-Performance Academy Cadillac DPi-V.R (Chip Ganassi Racing)
Renger van der Zande, Sebastien Bourdais, Scott Dixon, Alex Palou
Finish: Seventh in class; 14th overall (-39 laps)
Renger van der Zande: “We were ready to go at the end, get me in to fight for the win. But when I came out of bed, basically what happened is we had an issue and I found out we were many laps down. Managed to help a little on the Cadillac side. Disappointed, but I think we had the fastest car.”