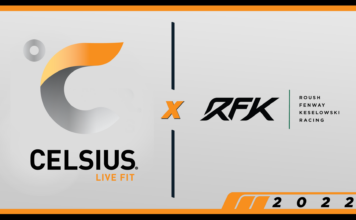 CONCORD, N.C. (Feb. 17, 2022) – RFK Racing has announced it will team with CELSIUS energy drink to help keep its team fit, active and hydrated as it prepares for the upcoming NASCAR season. The lifestyle brand will serve as an associate partner for the No. 6 race team, which launches into what promises to be one of the most exciting seasons in the team’s history.

CELSIUS prides itself on containing no sugar, no aspartame, no high fructose corn syrup, and no artificial preservatives, colors or flavors. CELSIUS is certified gluten free, kosher, and non-GMO.

“We are extremely excited to partner with RFK Racing and help keep Brad and the team fueled heading around the track,” said John Fieldly, CEO of CELSIUS. “We are all about creating authentic partnerships and knowing first-hand how much Brad loves drinking CELSIUS makes this a no-brainer.”

RFK launches off into the new season this week at Daytona Speedweeks. The running of the Daytona 500 will take place Sunday at 2:30 p.m. ET (FOX, MRN, SiriusXM).

CELSIUS embodies a healthy lifestyle and inspires you to live a fit and active life. They help fuel your body so you can stay motivated and push past your goals. CELSIUS fitness enthusiasts are fearless and each one is dedicated to living an active lifestyle that pushes the limits of their individual capability. CELSIUS stands out against other brands because it’s made with healthier ingredients such as ginger, guarana, green tea and 7 essential vitamins. Their drinks contain no sugar, no aspartame, no high fructose corn syrup, and no artificial preservatives, colors, or flavors. CELSIUS is certified gluten free, kosher, and non-GMO. They are made with nothing but the best, so you can do your best and take on any challenge that comes your way! To learn more about Celsius, visit www.Celsius.com and follow their social media on Facebook, Twitter, and Instagram.

About Roush Fenway Keselowski Racing
RFK Racing, in its 35th season of competition in 2022, features an ownership lineup pairing one of the sport’s most iconic names, Jack Roush, along with NASCAR Champion, Brad Keselowski, and Fenway Sports Group owner John Henry. Roush initially founded the team in 1988 and it has since become one of the most successful racing operations in the world, propelling him to be the first NASCAR owner to amass three hundred wins and capturing eight championships, including back-to-back NASCAR Cup titles in 2003 and 2004. Keselowski, a former owner himself in the NASCAR Truck Series, joins the ownership fold while piloting the iconic No. 6 Ford, and brings to the team a championship mindset himself having won the 2012 NASCAR Cup Series Championship. In 2007, Roush partnered with Henry, who also owns Major League Baseball’s Boston Red Sox and English Premier League’s Liverpool F.C., to form Roush Fenway Racing. Off the track, RFK is a leader and proven winner in NASCAR marketing solutions, having produced multiple award-winning social media, digital content and experiential marketing campaigns. Visit rfkracing.com, and follow the team on all social platforms @rfkracing.