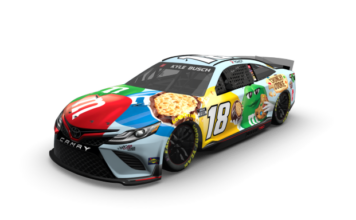 M&M’S Crunchy Cookie combines two favorite treats – M&M’S and chocolate chip cookies – which is now available nationwide and is bound to give race fans a fun, nostalgic snack to enjoy during this weekend’s race. M&M’S is also partnering with a cool cookie creator, Milk Bar’s Christina Tosi, to create 100, one-time-only, limited-edition cookies that will be made available to race fans on a first-come, first-served basis. Fans can sign up at MMS.com to find out when they’ll drop.

While Busch’s car will have a new look, the same impressive resume still remains when taking a deeper dive into his stats at the .75-mile Richmond short track. Busch has six career Cup Series victories at Richmond, most among active drivers. In addition to those six career wins, Busch’s Richmond stat sheet shows 18 top-five finishes and 25 top-10s in 32 career starts, making him the most consistent active driver at the track.

The Las Vegas native also leads all active drivers with his Richmond average finishing position of 6.9. Next best is Kevin Harvick at 10.0. Busch has completed all but one of the 12,828 laps available to him in his 32 Richmond starts.

The first four of Busch’s six career Richmond wins came in consecutive spring races from 2009 to 2012, besting Richard Petty’s previous record of three Richmond spring-race wins in a row from 1971 to 1973. Busch’s other two Richmond wins came in a sweep of the 2018 races there. With his impressive statistics and records to back him up, it’s little wonder that a visit to Richmond is one of Busch’s favorite stops on the NASCAR tour.

So, as the series heads to the “Capital of the Commonwealth of Virginia,” Busch and the M&M’S Crunchy Cookie team look to bring home their seventh win there wearing the latest M&M’S colors, and perhaps enjoy a celebratory “Cookie” in victory lane.

Is Richmond one of your favorite tracks, and what are your expectations there this weekend?

“Richmond is a great place for us and our M&M’S Crunchy Cookie team. You’ve really got to be mindful of the bottom of the racetrack and, based on the past, also mindful of your brakes and how you use them, especially getting into turn one where you can really overheat your brakes, which overheats your tires and makes you slide around more. With the new cars and better brakes, we’ll see if that changes anything. Having good cars there has certainly been something we’ve been fortunate with at Joe Gibbs Racing over the years. I’ve won there six times and I’ve been in the top-f10 about every time we go there and also a lot of top-five finishes, so I would like to think we can keep that going and, more importantly, get a win. It would certainly be a good time for it, so we look forward to Richmond being one of those places where we can do that. Really excited to have M&M’S Crunchy Cookie on board with us for the first time this week. We’ve had a lot of good luck with these new M&M’S schemes and it’s also a great snack, of course.”

What does it take to get around Richmond?

“Richmond is getting a little trickier, it seems like, just with the asphalt kind of getting older and the way the cars were. The consensus at Richmond is, of course, just trying to get your car to turn, but also having really good forward bite. You have to be able to get off the corners at Richmond. All of it correlates. Everything you want as a racecar driver, you’ve got to have most all of it and, if you don’t, then you better hope you have more forward bite than the rest of them. That’s sort of the equation of Richmond. It’s a fun place to race. It’s really cool. As a driver, you wish it could widen out and give you more options of being able to run around in different grooves, but it hasn’t shown us that the last couple of years. We’re hoping to get our M&M’S Crunchy Cookie Camry another win there.”

What is it about Richmond that suits your driving style?

“I don’t know, over the years – I started out really bad there. My first Truck Series race there was horrible. I think I ran into everything but the hot dog stand. The next time I went there was with Hendrick (Motorsports) in the Busch Series in 2004 when they first repaved the track, and I ran really well. We were able to win that race, and I led the most laps. From that point forward, I feel like I kind of learned or had a sense of what it takes to be fast there and what you need to be able to do to win there. As the years have gone on, the racetrack has definitely aged, it’s definitely gone through some transition, it has lost a lot of grip. There have been some changes in that respect, as well, just trying to figure out, ‘OK, what’s next. What’s the next thing that’s going to keep you on top of your game at Richmond.’ The new car is another challenge that we will take on there, now. It’s always been a good track for me, I enjoy going there. It’s a fun short track. It’s a very challenging short track that doesn’t lend itself to typical short tracks around the country.”

● Top-10 Streak: Busch currently has a streak of eight consecutive top-10 finishes at Richmond, a streak which started in September 2017. The streak is longest current top-10 streak at the .75-mile short track in the Cup Series.

● Get Out the Broom: Busch swept both races at Richmond in 2018, as he brought home his fifth career spring race win there that year and his first in the fall race. Both 2018 wins came from a starting position outside the top-10.

● Short-Track Ace: Busch has shown quite the propensity to win at NASCAR’s core short tracks. In addition to his six wins at Richmond, Busch has eight wins in NASCAR’s top series at Bristol (Tenn.) Motor Speedway and two at Martinsville (Va.) Speedway for his 16 total wins on those three short tracks alone.

● Spring is in the Air: While Busch added a win in the fall Richmond race to his resume in 2018, the two-time Cup Series champion has shined in the spring race there. His four consecutive Cup Series spring-race wins from 2009 to 2012 bested Richard Petty’s previous record of three Richmond spring-race wins in a row from 1971 to 1973. Busch also won the 2018 spring race at Richmond.

● 222 and Counting: Busch will be aiming to add to his record 222 overall wins among NASCAR’s top three series this weekend at Richmond. In addition to his 59 Cup Series wins and 102 in the Xfinity Series, Busch has 61 wins in the Camping World Truck Series.