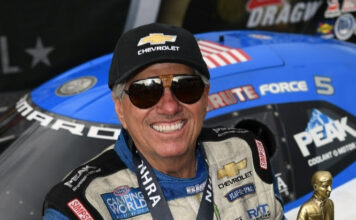 What: Virginia NHRA Nationals
When: Friday, May 13-Sunday, May 15
Where: Virginia Motorsports Park in North Dinwiddie, Virginia
TV: FS1 will telecast eliminations at 6:30 p.m. ET May 15

When the 16-time National Hot Rod Association (NHRA) Funny Car champion can crack a .05-of-a-second light, blast off to a 335.07 mph run in the 11,000 horsepower PEAK BlueDEF Platinum Chevrolet Camaro SS and keep winning, why should he? Even at age 73.

Force enters the Virginia NHRA Nationals this weekend with renewed confidence after winning the four-wide race May 1 at zMAX Dragway in Concord, North Carolina, adding to his amazing career. The NHRA Camping World Drag Racing Series returns to Virginia Motorsports Park for the first time since 2019.

“I’m excited to go to Richmond, but I’m going with a little different attitude. My race car has found consistency,” said Force, a four-time winner at the track.

Driver and Camaro were consistently at peak performance at zMAX Dragway, where Force won in the four-wide format for the second year in a row. He qualified No. 1 for the 164th time with a track-record run of 3.850-seconds, set the track speed record with the 335.07 mph pass and went on to post his 155th career win.

“Things just seem to happen where you’re destined to win,” Force said. “It was amazing. On some days, magical things just happen. Things went right and we were able to win the race. It was like it was destiny and it was a great weekend for my team. To finally get a win this year gives me a lot of confidence.”

The next Funny Car victory by Force or teammate Robert Hight, driver of the Auto Club of Southern California Camaro SS who sits second in championship points entering the seventh of 22 events, will be the 150th for Chevrolet since 1967. The Camaro has been to the winner’s circle 69 times.

The four JFR drivers have recorded five victories in the six races – two by Hight to start the season, two in a row by Brittany Force in the Flav-R-Pac/Monster Energy Chevrolet dragster and one by her father. Austin Prock, driver of the Montana Brand/Rocky Mountain Twist Chevrolet dragster, was runner-up at Pomona and shown promise as he returns to full-season competition for the first time since 2019 when he was voted NHRA rookie of the year.

Hight was runner-up in the four-wide final at zMAX Dragway, and Brittany Force enters the race weekend as the Top Fuel points leader.

The event will also feature the third round of the Constant Aviation Factory Stock Showdown. Len Lottig won the opener at Gainesville in his Chevrolet COPO Camaro and former series champion David Barton was runner-up in his COPO Camaro in the four-wide event two weeks ago at zMAX Dragway.

BRITTANY FORCE, JOHN FORCE RACING, FLAV-R-PAC/MONSTER ENERGY CHEVROLET DRAGSTER (winner at Las Vegas and Houston; first in points): “Richmond is next on the list and after a couple of years away, our Flav-R-Pac / Monster Energy team is excited to return. We head into the Virginia Motorsports Park in the points lead after back-to-back wins and are looking to leave in the same position. Our goals are to qualify in the top three, make three consistent qualifying runs and have a long race day so we can grow that points lead.”

AUSTIN PROCK, JOHN FORCE RACING, MONTANA BRAND/ROCKY MOUNTAIN TWIST CHEVROLET DRAGSTER (runner-up at Pomona opener): “It was a good weekend off celebrating Mother’s Day, always nice to spend time with family and friends, but this Montana Brand team is excited to get back to business. We’ve been getting this car back into winning form and can’t wait to see what our performance looks like this weekend. Hoping the weather holds off, and we can put on a showing for our awesome NHRA fans. We haven’t been back to Richmond since my rookie season, so it’ll be great to be back.”

JOHN FORCE, JOHN FORCE RACING, PEAK BLUEDEF PLATINUM CHEVROLET CAMARO SS (four-time winner at track; five-time No. 1 qualifier; holds track Funny Car elapsed time record, set in 2019): “We’ll be really trying to put on a show, maybe set some more records. I’m feeling good coming off a win. The credit really goes to Danny Hood and Tim Fabrisi who run the PEAK BlueDEF Chevy. I know drivers always get all the credit, but it really is those guys and the whole team that help get the job done, couldn’t do it without them.”

ROBERT HIGHT, JOHN FORCE RACING, AUTO CLUB OF SOUTHERN CALIFORNIA CHEVROLET CAMARO SS (two-time winner this season; second in points; holds track Funny Car speed record, set in 2019): “It’s been a decent start to the season for this Auto Club team. We’ve had some consistency which is what we lacked last year. We just need to keep it going. There’s room for improvement, there’s always room for improvement and I think this team has high expectations. Jimmy Prock and Christ Cunningham are two of the best, so it’s hard not to be confident with them on your side. I’m looking forward to seeing what we can do in Richmond. Really glad to be heading back after a couple years. Hopefully, we can pull out a win and get this Auto Club Chevy in the winner’s circle and back in the points lead.”﻿

About Chevrolet
Founded in 1911 in Detroit, Chevrolet is now one of the world’s largest car brands, available in 79 countries. Chevrolet models include electric and fuel-efficient vehicles that feature engaging performance, design that makes the heart beat, passive and active safety features and easy-to-use technology, all at a value. More information on Chevrolet models can be found at www.chevrolet.com.