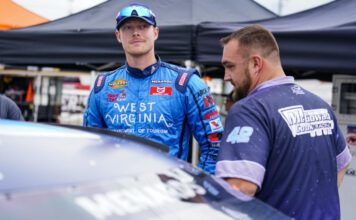 “I’m eager to get on the track on Friday,” said Rose.

“Charlotte Motor Speedway is going to be my first intermediate track in the ARCA Menards Series and I feel like I’ve done a really good job doing what I can to prepare myself for the 100 laps that await on Friday night.”

With a mixture of superspeedways and short tracks added to Rose’s growing racing resume in 2022, the General Tire 150 is a good jump-starter for Rose who will attack other extremely fast tracks on the ARCA tour later this season.

“I think it’s going to be extremely important to get our No. 42 West Virginia Tourism Chevrolet SS dialed in for practice on Friday afternoon and hope that we can find ourselves near the top-10. If we can do that, we can continue to build our pace throughout the race and hope when push comes to shove when the checkered flag falls – we are all leaving Charlotte with a satisfying finish.”

Charlotte marks Rose’s fifth ARCA start of the year between the two ARCA platforms and has maneuvered two top-10 finishes, highlighted by a season-high 10th place finish at Five Flags (Fla.) Speedway and Dover (Del.) Motor Speedway respectively, a series of mechanical failures have not allowed Rose nor his Bruce Cook-led team to capitalize on the array of strong performances this season.

“I think our most recent race at Nashville, we were going to finish top-five,” recalled Rose.

“The guys on this Cook Racing Technologies team brought me an extremely fast No. 42 West Virginia Tourism car, but we encountered another mechanical gremlin that put us out of the race and a disappointing 12th place finish.

“While it’s tough to look at those finishes, the positive is we know how we were running before things happened that hindered our efforts. Over the past three weeks, we have really taken an extensive look at how we can make sure the issue doesn’t happen again and I believe the solution is there.

“Now, we just need to go to Charlotte, mind our matters, learn and get the best finish possible.”

The West Virginia Department of Tourism promotes West Virginia as a leading four-season travel destination and a top state to live, work and retire.

Known as the Mountain State, West Virginia is one of the most scenic states in the United States and home to thousands of acres of parks and public lands, including America’s newest national park and 45 state parks and forests.

In addition to its majestic mountains and rolling hills, West Virginia is full of rich historic sites, enchanting art galleries, charming towns, and an immense sense of belonging found only in its heaven-like landscapes.

In West Virginia, let country roads lead you far away from everything. And a little closer to heaven.

“My relationship with the West Virginia Department of Tourism is everything to me,” added Rose.

“Without them, I would not be able to race at Charlotte. It is my goal throughout the year to spread the mission of everything the West Virginia Department of Tourism means.

“It goes without saying that we have had a lot of speed with our West Virginia Department of Tourism race cars this year and I’m hopeful we can climb that ladder of consistency during the summer stretch. There is still more work to do though. A lot more work.

“We will get there though. Our Cook Racing Technologies team is too good not to have our luck turn around and post the finishes we know that we are capable of.”

This weekend at Charlotte, Rose will also continue to boost his new partnership with the Freedom Fighter Outdoors (FFO). FFO’s mission is to raise awareness and seek public aid for needs, services and activities for injured veterans.

For the General Tire 150, Rose and the team welcome Gary Bowers, an 18-year veteran of the United States Army.

“I am very proud of my relationship with Freedom Fighter Outdoors and to host Gary this weekend at Charlotte,” sounded Rose. “I feel it is our duty to give back to those who have sacrificed so much to allow me to not only race but enjoy the freedom that we have, especially on this Memorial Day weekend.

“My involvement with Freedom Fighter Outdoors will continue to strengthen as our race season marches on and I look forward to showcasing that soon.”

The General Tire 150 (100 laps | 150 miles) is the fifth of 20 races on the 2022 ARCA Menards Series schedule. A combined practice and qualifying session begins on Friday, May 27, 2022, from 12:00 p.m. to 12:45 p.m. The event will be televised live on FOX Sports 1 (FS1) with the Motor Racing Network (MRN) and SiriusXM channel 391, online channel 981 managing the radio waves beginning at 6:00 p.m. ARCARacing.com will also stream live timing and scoring throughout the entire weekend festivities. All times are local (ET).

About The West Virginia Department of Tourism:

The West Virginia Department of Tourism promotes West Virginia as a leading four-season travel destination and top state to live, work and retire.
﻿
Known as the Mountain State, West Virginia is one of the most scenic states in the United States and home to thousands of acres of parks and public lands, including America’s newest national park and 45 state parks and forests.

In addition to its majestic mountains and rolling hills, West Virginia is full of rich historic sites, enchanting art galleries, charming towns and an immense sense of belonging found only in its heaven-like landscapes.