Chevrolet back to Bristol looking for wins 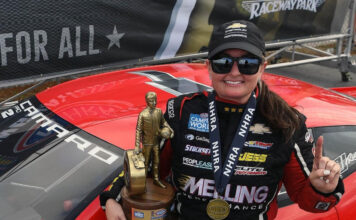 Where: Bristol Dragway in Bristol, Tennessee

The four-time National Hot Rod Association (NHRA) Pro Stock world champion has accumulated four victories in six races in the Melling Performance/Elite Motorsports Chevrolet Camaro SS, including the past three outings, for an unprecedented start to her 18th season.

“In 2015, we had a tremendous year, a season winning nine of 11 finals and just claiming the championship in Vegas before the year was even over. And then this year we’re off to an even better start than we were in 2015,” said Enders, who hasn’t qualified lower than fourth this season.

That 2015 championship season – the second of her four with Chevrolet – included a victory at Bristol Dragway in Tennessee, where the NHRA Camping World Drag Racing Series visits this weekend.

The NHRA Thunder Valley Nationals will mark the first appearance of the Pro Stock class at the track since 2018, when No. 1 qualifier Greg Anderson was runner-up to Jeg Coughlin. Enders lost to Drew Skillman’s Camaro SS in the quarterfinals.

Enders claimed her 400th career elimination round win and her 37th victory in the final at Epping, New Hampshire. Add 28 runner-up finishes and Enders has advanced to the finals in 25% of her 270 career race day appearances. Since returning to the Chevrolet fold for the 2017 season after a one-year absence, Enders has registered 18 wins and 14 runner-up finishes in 99 races. Plus, championships in 2019 and ’20.

She has a sizable points lead in the Pro Stock standings over Elite Motorsports teammate Aaron Stanfield, who won the season opener at Pomona, California, in the Janac Brothers Camaro SS and most recently was runner-up to Enders at Epping.

“We’re ready to get on a roll, carry the momentum. It’s just important that we keep going rounds, keep parking these Elite Motorsports cars in the winner’s circle,” Enders said. “I know as well as anybody that there are way more valleys than there are peaks, but we’re going to enjoy the ride while it lasts and just try to capitalize on every single moment.”

Anderson, driver of the HendrickCars.com Camaro SS and the reigning Pro Stock champion, continues his quest for victory No. 100 to join John Force (155) as the only professional drivers with triple digit wins.

Brittany Force is also off to the best start of her Top Fuel career, owning three wins, a 16-5 elimination round record and two No. 1 qualifiers. The driver of the Flav-R-Pac/Monster Energy Chevrolet dragster has held the top spot in the standings for a career-best four races.

John Force Racing teammates Robert Hight (three wins) and John Force (one win) are also off to strong starts. Hight, who is second in Funny Car points, has been to the final round in each of the past three races in the Automobile Club of Southern California Camaro SS. John Force, who turned the top qualifier honor in the four-wide event at Charlotte into victory in the PEAK/BlueDEF Platinum Camaro SS, is fourth in the standings.

Austin Prock, a semifinalist the past two races in the Montana Brand/Rocky Mountain Twist Chevrolet dragster, is fifth in the Top Fuel standings.

The competition this weekend will also include the fourth round of the Constant Aviation NHRA Factory Stock Showdown featuring the Chevrolet COPO Camaros.

BRITTANY FORCE, JOHN FORCE RACING, FLAV-R-PAC/MONSTER ENERGY CHEVROLET DRAGSTER (three-time winner this season; first in standings): “We head to Bristol next for Father’s Day weekend at one of my favorite tracks on the circuit. This Flav-R-Pac / Monster Energy team is heading in with the points lead and we hope to leave the same way. Being one of my favorite tracks, we’re looking for a long weekend and our fourth win of the season. A win at Thunder Valley has always been on my bucket list and we plan to make it happen this weekend. I’m glad we are bringing this race back on Father’s Day weekend. It’s how I’ve celebrated my dad on Father’s Day for the last 10 years and I’m glad we return to it this season.”

AUSTIN PROCK, JOHN FORCE RACING, MONTANA BRAND/ROCKY MOUNTAIN TWIST CHEVROLET DRAGSTER (runner-up at Pomona opener; semifinalist the past two races; fifth in points): “We’re coming off two semifinal appearances, just knocking on the door for our first win of this season. It’s going to be soon that my Montana Brand / Rocky Mountain Twist team are hoisting a Wally and it may just be this weekend. I remember racing with my dad on Father’s Day my whole life, so Bristol Dragway always has a special place in my heart. Nothing better than racing with family.”

JOHN FORCE, JOHN FORCE RACING, PEAK/BLUEDEF PLATINUM CHEVROLET CAMARO SS (No. 1 qualifier and Charlotte four-wide winner; four-time winner at the track; fourth in points): “I love racing at Bristol Dragway. It’s tradition being there on Father’s Day weekend, it’s how I’ve celebrated with my girls for years now. This PEAK team, we’ll get out there and look to go some rounds, qualify well. We’re OK, we’re in it and we’ve been fast. I just need to do my job out there on track and I know my son-in-law Danny Hood and Tim Fabrisi, they’ll have this Chevy running right.”

ROBERT HIGHT, JOHN FORCE RACING, AUTO CLUB OF SOUTHERN CALIFORNIA CHEVROLET CAMARO SS (three-time winner this season; second in points): “Not a bad start to the season, eight races in with three wins and second in points. This Auto Club team is definitely looking for more though. We need to stay consistent, keep working hard and take it one run at a time. The class is really competitive, we were the first to three wins but we aren’t the only ones now and we need to keep it going. That’s the goal heading to Bristol. I haven’t won there in a while (2011) and it would be great to get it done on Father’s Day with my daughter, Autumn, there with me.”

KYLE KORETSKY, KB RACING, LUCAS OIL CHEVROLET CAMARO SS (No. 1 qualifier at Phoenix; runner-up at Gainesville; third in points): “This is my first drag race at Bristol, so I’m pretty excited. I think Q1 will be a learning curve and after that I’ll adapt pretty quickly. I have all the confidence that we’ll be just fine, and we get that yellow hat and a blue hat at the end of the weekend. Every little thing counts to be able to win in this class. I recently watched ‘Top Gun: Maverick’ and in one scene he said, ‘It’s a dogfight,’ and that’s what it is (among Pro Stock competitors). It’s just good racing.”

DALLAS GLENN, KB RACING, RAD TORQUE SYSTEMS CHEVROLET CAMARO SS (winner at Gainesville; No. 1 qualifier at Epping; fourth in points): “Coming back from that six-week hiatus to a No. 1 qualifier in the RAD Torque Systems / KB Racing Chevrolet Camaro was a definite morale booster for me as a driver and our team. We worked hard in that time off and to put it down on the track faster than anyone else in qualifying was cool to see. I’m glad we’re going to the majority of the races left this season so we can start rolling with the momentum.”

GREG ANDERSON, KB RACING, HENDRICKCARS.COM CHEVROLET CAMARO SS (reigning Pro Stock champion; seeking to become second pro driver with 100 wins): “Racing on Father’s Day has always been good to me. I’ve won a lot of races on Father’s Day. I can remember those special days with my father in the house and give him a trophy. Bristol is a cool racetrack. I understand they grinded (the racing surface to eliminate bumps) and they got it a lot better. We can out this year and the other group (Elite Motorsports) made a big gain, and we got a little behind the eight ball. We’ve had a month to work on stuff and have gotten a lot better. I wouldn’t say we’re ahead of them yet, but I would say we’re back even with them and the next step forward is to get ahead of them like we were last year. That’s the goal over the next couple of months. Being able to run the same is certainly better than where we were at the start of the year. But we’re not satisfied until we’re ahead of everybody.”

CAMRIE CARUSO, CARUSO FAMILY RACING, SAND HAULERS OF AMERICA CHEVROLET CAMARO SS (first season in Pro Stock; No. 1 qualifier and runner-up at Houston): “I have a lot of support from my family especially, my dad and Papa Joe (grandfather) so racing on Father’s Day weekend will be really cool. This whole season has been a whirlwind, but Houston was a totally different level. We were No. 1 all weekend and then we had a tough ladder to get to the final round. Racing Erica was great, but I don’t really care who is in the other lane on Sunday. I know I have to do my routine and hit the tree as hard as I can.”

TROY COUGHLIN JR., ELITE MOTORSPORTS, JEGS.COM CHEVROLET CAMARO SS (runner-up at Phoenix): “The goal now is to win my first Pro Stock race at the same track where Dad got his. How cool would that be? We have a new car this year and we’re still learning what it wants. It’s taking some time but once it all falls into place, look out. There has been so much work, so many hours, so much sweat put into figuring this car out. I know we’re really close. Hopefully, this is the weekend when it all comes together.”