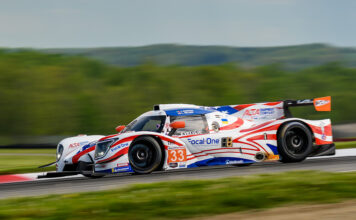 Cardio and heat training in the regimen for Willsey and Barbosa, as Jakobsen readies for another US track debut

JUPITER, Fla. (20 June 2022) – As the Sean Creech Motorsport (SCM) team prepares for the challenges ahead in Sunday’s Sahlen’s Six Hour of The Glen (Sunday at 10:40 a.m., USA Network), all three drivers are focused on fitness and heat acclimation to prepare for the typically grueling event at Watkins Glen International.

Full-season drivers João Barbosa and Lance Willsey will be joined by endurance driver Malthe Jakobsen, who last took the wheel of the No. 33 SCM Exelixis/Focal One/Alta Equipment Ligier JS P320 for the team’s victory in the Mobil 1 Twelve Hours of Sebring.

Jakobsen will compete at WGI for the first time this weekend, while Willsey will see his first IMSA action at the track, having contested SCCA and vintage events there in the past.

Barbosa has an extensive history at the legendary road course, having competed in 19 six- hour events and 25 total IMSA races. He has scored four wins, two poles and six podium finishes in the endurance classic, and racked up over 10,000 race miles in total – so when Barbosa talks about the challenges of Watkins Glen, he knows of which he speaks.

“Watkins Glen is a high-grip, quick track,” said Barbosa. “The Loop is a long sweeping corner with a lot of G-Forces, which becomes very tough on your neck in an endurance race. They repaved the track years ago with very good asphalt to keep up the speed and the grip. It’s one of my favorite tracks, but preparation is key.”

Without driver cooling aids or much outside ventilation, it gets very hot inside the Ligier prototype cockpit, and both Willsey and Barbosa have added heat training to their daily regimens. Unsurprisingly, Willsey, a Boston-area physician and medical entrepreneur takes a very scientific approach as he has significantly grown his time on two wheels.

“When I ride, I generate all kinds of data,” said Willsey, 61. “Distance, heart rate, watts expended, calories burned, everything. I can see how hard I have to work – and by work, I mean watts expended – almost 30% harder now than I did 10 years ago in order to generate the same physical performance. Obviously, I’m one of the older drivers in the series so I have to work a bit harder. I’m pushing 40 to 80 miles a day, six days a week, which is almost a full-time job!

“I’m pretty locked into a two-pronged strategy,” Willsey continued. “I spend an hour in the morning doing hyper-thermic conditioning, riding an indoor bike for 60 to 90 minutes with a heater on. That drives my core temperature up, simulating a driving stint in hot conditions. Heat is the enemy so physiological adaptation is key. In the afternoon, I do outside cycling, alternating between long, slow rides and interval training – less miles, but more max heart rate. There are some reasonable hills in the Boston area and there’s also the Mount Wachusett, which is over 2,000 ft. tall. There are many pieces to the puzzle – I have to do whatever I can to even the playing field against all these kids! Strength and conditioning, and time on the simulator, are all aspects I can control.”

“It’s definitely a challenge (inside the car) during the longer races,” said Barbosa, 47, who resides and trains in warm and humid coastal Florida. “And it can be super hot at Watkins Glen. It can be difficult to prepare, and preparations depend on your physical make-up. I try to minimize the heat’s effect and living in Florida is perfect – I put my stationary bike in the garage, with little circulating air, and ride for up to an hour. I’m a puddle of sweat at the end, it can be more than 95F inside and quite humid as well, difficult to breathe. It’s not fun, but we have to keep doing it. I prefer to suffer more outside the car and less inside! Apart from that, I run or swim, and go to the gym three or four times a week to work with weights. I also have a system at home to work on neck strength, which is very important at Watkins Glen as well.”

By contrast, 18-year-old Jakobsen doesn’t plan to change his regular training regimen ahead of his third new racetrack of the year (having finished second with the team in the Rolex 24 at Daytona).

“Normally, I do a lot of running and cycling, and then a little bit of weightlifting,” said Jakobsen. “But not a lot. I’ve never been to Watkins Glen so I’ve been practicing a bit on the simulator to get ready. I really have no idea what to expect, so there will be a lot to learn!”

The Sahlen’s Six Hours of The Glen takes the green flag Sunday at 10:40 a.m. Eastern. The race will be broadcast live in the U.S., in its entirety on Peacock TV and on USA Network. International viewers can watch via IMSA.tv, with IMSA Radio also available at IMSA.com.

About SCM
Team leader Sean Creech has competed in a multitude of sports car series from 1990 until the present day, including Group C, IMSA GTP, WSC, Grand-Am, SRO World Challenge, and IMSA. SCM will contest the full WeatherTech SportsCar Championship in 2022 with João Barbosa and Lance Willsey. http://seancreechmotorsport.com/

About Alta Equipment
An industry-leading material handling and construction equipment company, Alta Equipment is an innovator of solutions, delivering diverse products and unrivaled support centered on building lasting customer relationships. Alta Equipment began in 1984 with a single location in Detroit and has grown to 57 locations throughout the Midwest, Northeast, and Florida. https://www.altaequipment.com/

About Focal One
One in eight men will be diagnosed with prostate cancer during their lifetime in the United States. The Focal One® HIFU Prostate treatment offers patients a non-invasive outpatient procedure to target prostate tissue while avoiding the common side effects such as loss of urinary continence and sexual function. The Focal One treatment uses high performance, high intensity focused ultrasound (HIFU) to precisely target and ablate the prostate, allowing patients to quickly return to normal activities. http://www.focalone.com/