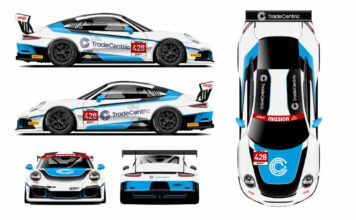 A Virginia Beach, Virginia native, Behrman comes to Hardpoint with a variety of club racing experiences over the past three seasons. Behrman, a 44-year-old business man who cofounded TradeCentric in 2012, will drive the number No. 428 TradeCentric/Hardpoint Porsche 911 GT3 Cup at Mid-Ohio, Watkins Glen, Virginia International Raceway, Circuit of the Americas and Daytona International Speedway to finish the season.

Behrman previously finished on the podium of the Mission Foods GT3 Cup Trophy class of the championship during a sprint race at Road Atlanta earlier in 2022.

“I have been following Hardpoint’s IMSA growth for a few years, being local to VIR and cheering on the home team,” Behrman said. “I ran the Road Atlanta round with TLM, who did a great job in supporting me but I wanted to get the car closer to home with a respected team I could continue to grow and progress with. Being with Hardpoint means I have easy access and the ability to test, practice and grow. We ran a test at VIR a few weeks ago and we really meshed well, so I’m looking forward to getting this race weekend underway!”

The move to IGT complements Hardpoint’s IMSA efforts, which will race the same weekend at Watkins Glen International. In addition to Behrman’s 991.1-generation Porsche, Hardpoint competes in the IMSA WeatherTech Championship with a Porsche 911 GT3 R and the Michelin Pilot Challenge GS class in a Porsche 718 Cayman GT4 RS Clubsport. Hardpoint also won the 2021 AM-class championship in the inaugural season of Porsche Carrera Cup North America.

“All of us at Hardpoint are excited to have Brady join the team,” Hardpoint owner Rob Ferriol said. “This is just the latest step in our growth, with the IGT program serving as another rung on the ladder of opportunities that we can provide up and coming or established drivers who are looking for an opportunity to shine or develop.”

Behrman’s efforts with Hardpoint begins with the traditional IGT schedule, most often run in conjunction with the SportsCar Vintage Racing Association (SVRA) and Trans Am Championship. Each weekend includes a pair of sprint races as well as a 60-minute enduro. IGT includes three different championships for late model Porsche and Ferrari competitors, and is home primarily to sportsman drivers, with the occasional professional driver or coach joining the action in endurance races.

“It’s a new era for me and for the company and I am really excited to represent TradeCentric in its freshly launched, rebranded name,” Behrman said. “I am hoping to keep the momentum of success I had at Road Atlanta at the remaining five races of the year and continue to grow, finding the perfect balance and limits of the car and my abilities. I have zero physical seat time at Mid-Ohio, just some iRacing and lots of studying. Just like at Road Atlanta, I’m hoping that preparation and with the help from my coach, Coby Shield, to have that beginner’s luck a second time. I think I will do very well at Mid-Ohio, it looks to be an absolutely fantastic and favorable layout.”

Behrman and the rest of the IGT field will practice during a Thursday test day at Mid-Ohio, followed by a pair of qualifying sessions on Friday, June 24. Saturday’s races are at 10:45 a.m. ET and 5:35 p.m. ET, respectively, with the hour-long Enduro on Sunday morning at 8 a.m. ET.