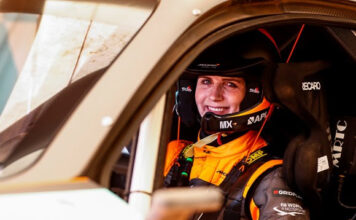 McLaren XE made a strong debut at the Desert X Prix, coming back from a disappointing Qualifying to win the Crazy Race in spectacular fashion.

Though they were unable to convert this into a maiden podium after Tanner Foust crashed out in the Final, the newcomers will be looking to build on the promise they showed in NEOM. We caught up with Emma Gilmour ahead of the imminent Island X Prix double-header.

Extreme E: After a break of more than four months, how excited are you to get behind the wheel?

Emma Gilmour, McLaren XE: So excited!! It’s felt like forever since Round 1 and I can’t wait to be competing again.

XE: The break since NEOM will have allowed plenty of time for reflection. How did you feel the first round of the season went?

EG: The first round was the first time we all worked together as a team and we learnt so much from the event. Sadly, the Final didn’t end for us as we hoped, but we still came away with a lot of positives from the weekend.

XE: How much learning has been carried out since your maiden event?

EG: We have learnt a lot from Saudi and there has been a lot of work from everyone in the McLaren team to ensure we carry that momentum forward into Rounds 2 & 3 and the remainder of the season.

XE: What have you been doing during the gap between Extreme E events?

EG: With the long break I was able to return home to New Zealand and get back to work in my car dealership. I also did some local rallies and rallysprints with my own car and team. It was great to still be racing! We’ve also signed some great new partnerships with Vantage, ICE (New York Stock Exchange) and Dell. It’s all very exciting!

XE: This will be the first double header event in Extreme E – do you think that will create a different type of challenge for teams?

EG: It will be really interesting to see how each team approaches the week. I see it becoming more of an endurance event rather than a sprint event like we’ve seen in earlier rounds. With only one day between the two events it will be a big week for everyone.

XE: How much do you know of the conditions upcoming in Sardinia?

EG: I competed in Sardinia last year with Veloce and my understanding is that we are in the same location so I have an idea of what to expect. We’ll be there in Summer this time, rather than Autumn, so it will be hotter and dustier. I imagine the terrain will be as challenging as it was last time!

XE: Lastly, what is your objective for the Island X Prix double-header in Sardinia?

EG: Our aim is to have a competitive, clean run and maximise our Championship points from both events so that we can head into the second part of the season in a really strong position.