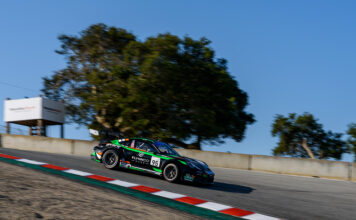 WATKINS GLEN, NY (22 June 2022) – Irish Mike’s Racing returns to action with a two-car entry for this weekend’s Round 4 of the IMSA Porsche Carrera Cup North America presented by Visit Cayman Islands during the Sahlen’s Six Hours of The Glen event weekend.

The team will field a pair of Porsche 992s in a pair of 40-minute races on the legendary 11-turn, 3.4-mile circuit. Conor Flynn will drive the No. 95 FlynnCo Cars / Chillout Systems entry in the Porsche Pro class, while Craig Conway pilots the No. 97 Diamond Suzuki Porsche in the Porsche Pro-Am division.

Conway is coming off his best finish of the season, placing a season-best 10th in Pro-Am in the Sunday race at Laguna Seca after finishing 11th on Saturday. Since then, he joined Flynn in a test at the upstate New York circuit.

“We had a good test at the Glen, and it was very helpful,” Conway said. “We learned a lot, and made some changes to the suspension and wing. I felt pretty good.

“It seems I’ve been going to the Glen forever, and it’s the same track,” Conway said. “The biggest difference is that it’s much grippier since they paved it a few years ago. The test was my first time there with our new Porsche. I got a little closer every time out, I was learning on every lap.”

Flynn finished 10th in class during Round 2 at Long Beach, but was forced to sit out both races at WeatherTech Raceway Laguna Seca after a practice incident forced him to go from racer to spectator.

“When we get back to Watkins Glen, we’ll be a couple of steps ahead of where we would have been if we didn’t test,” Conway said. “We also fixed Conor’s car since his accident, and both Porsches are now OK. I think we will be in pretty good shape when we get back to the Glen for the races.”