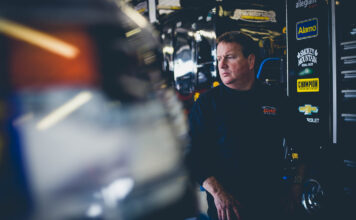 STATESVILLE, NC: This week, GMS Racing announced that it would be welcoming veteran Crew Chief Jeff Hensley back on top of the pit box for the No. 23 Champion Power Equipment Chevrolet driven by Grant Enfinger in the NASCAR Camping World Truck Series.

As one of the most respected crew chiefs in the garage, Jeff Hensley brings vast knowledge from a career spanning over 35 years in the sport. In total, Hensley has amassed 18 Truck Series wins and 11 Xfinity Series wins, and was the championship winning crew chief for the 1990 Xfinity Series season. He was previously with GMS Racing for two seasons in 2016 and 2021, serving as crew chief for drivers Spencer Gallagher, Chase Purdy, and AJ Allmendinger.

Hensley is optimistic about a change in scenery, stating “I am grateful for the opportunity to return to GMS Racing and reunite with Grant. We have great chemistry, and Grant is a driver that I have a lot of respect for on and off the racetrack. We have high hopes for the remainder of the 2022 season, and we have a team capable of contending for wins on a consistent basis. I look forward to showing our strength in these final eight races of the year.”

Keen followers of the series will remember that this will not be the first pairing between the two. Hensley and Enfinger have worked well together in the past, as the duo won five races during a four season span from 2017-2020. Ironically, the last time these two personalities worked together, they made the final round of the playoffs and competed against three GMS Racing teams for the championship. That year in 2020, Enfinger earned his best points finish to date, finishing fourth in the overall standings.

Enfinger looks forward to working with a familiar face once again, stating “Jeff and I have had success together in the past, and I’m looking forward to having him back to call the shots for the remainder of the season on our Champion Power Equipment Chevy. We know each other well so we should be able to pick up where we left off a couple years ago.”

The newly reunited duo will make their first on track appearance at Mid-Ohio Sports Car Course for the O’Reilly Auto Parts 150 on Saturday, July 9th. Enfinger currently sits ninth in the NCWTS points standings in a season highlighted by three top-fives and seven top-10 finishes, and is eyeing his fourth playoffs appearance. The No. 23 GMS Racing team is positioned in eleventh in the team standings, and is actively pushing to make a run at making the owners’ points playoffs with just two races left in the regular season.

Since 2003 Champion Power Equipment has earned a reputation for designing and producing the market’s finest power equipment. From our original headquarters in Santa Fe Springs, California, Champion has expanded its North American footprint to include facilities in Jackson, Tennessee, Milwaukee, Wisconsin and Toronto Canada. Today, Champion’s product line has expanded to include portable generators, home standby generators, inverter generators, engines, winches and log splitters. With over 2.5 million generators sold in North America, Champion is a market leader in the power equipment field. Visit ChampionPowerEquipment.com for more information.