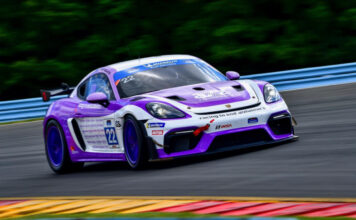 Saturday’s race will take the green flag at 4:10 p.m. ET, streaming live on Peacock in the United States.

Nick Galante, Driver, No. 22 Porsche Cayman: “I love Canadian Tire Motorsport Park. It’s fast and it really requires full commitment to get the job done here. it’s been great to me, with a win and a podium, so even though it’s been a couple of years I can’t wait to get back. We had a tough weekend at Watkins Glen, so we’ll forget about that, focus on what we can control, and continue to push forward in honor of all of the names on our Racing To End Alzheimer’s Porsche Cayman.”

Sean McAllister, Driver, No. 22 Porsche Cayman: “This is my first time at CTMP, but I did some sim work at Force Dynamics in New York and it is a rollercoaster of a track. It’s got very fast corners, a long back straight, and it seems very busy. I’m excited to get in the car and see how close to the sim it is but it should be a very fun weekend of high speed racing. I can’t wait!”