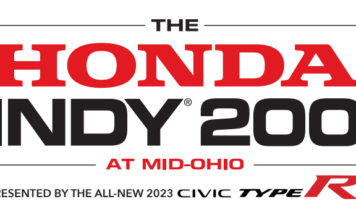 “It’s amazing. I really wanted to get a win here with mom and dad here. And our first time we have had Odyssey Battery on the car and you know it was it was awesome as well to have them on board but that mom and dad is very special on America’s weekend.

“Last night I was dressed up as a bald eagle, so maybe I need to do that every year, July 4 weekend.

“It was tough. You know, you’re thinking about fuel but thankfully obviously Chevy gave us the great fuel mileage and driveability off the restarts that allowed me to get a little bit of a gap from Palou and the Honda there so I’m really really proud of the guys for the car they gave me even though it was a little hard to drive towards the end. I would love to make it a little bit easier for myself but I’m super proud. Everyone did great pitstops from this car three, the thirsty threes, baby we’re going to the moon.

“Yeah, it was, it was tough, because, you know, my car sort of went away a little bit towards the end of the race, you know, it was good at the start. I think once a tire that the track changed a little bit and got a little bit dirty and bits and pieces, they got hard to sort of put the power down, which was making it hard to defend, but it is what it is we’ll learn and move on. But I think we’ve made some changes that certainly helped us today. And thankfully we did them.

“Yeah, look, it’s great momentum for us at the end of day this isINDYCAR you know, things can happen all the time. And I think we’ve had great pace to be in the top five, you know, I’ve made mistakes. There’s been certain things that haven’t gone our way strategy wise that have made us sort of fall back a little bit but we’ve always had the pace and it was all about having the belief and the belief and the guys we’ve got a great group here on the car three you know it’s we’re all mates you know, we’re just having fun with a go racing and have fun. So really proud to do it. And yeah, I’m excited.”

“Amazing day, amazing day for the Verizon 5G Chevy. Yeah. I said in a strategy meeting, which I have a few times this year, we’ve qualified bad and a top-10 would be great. Yellow when we were 12th, I thought, OK, we can be in the top-10 here. Good restarts, good exchanges, good pit stops, good strategy. Great job by the team. Over the moon, loving it man. Starting at the back is more entertaining than leading at the front! We’ve got to get on top of the qualifying. It wasn’t a pace issue at all. I can’t thank Verizon and Chevy enough. We’re having such a great year.

“You just have to keep your head in these races. As you see every week, so much happens. If you don’t make any mistakes, you’ll make up positions. This is IndyCar; you can never predict what’ll happen. I’m loving it. I hope the fans are too.”

“We had a great race. Did not expect a top-four really before the race. Really before the race, I said top-eight I’d be happy with. Racing with Will… was nice, but he didn’t leave me enough space on entry in Turn 4. He put me in the grass.I think you have to leave enough space. But he didn’t get a penalty. But he did a great race. I didn’t expect to see him in my mirrors at the restart! The team, the 21 BitNile car did a great job at the pit stops. I’m happy to be back in the top-four, top-five. That’s needed at the moment. It was the perfect race.”

“It’s not a great day not a not a bad day either. We ended up seven we had a good start I think we got up to 11 at the start first pit pit exchanges really good we I think worked up to seven or six and then you know marching forward and then a couple of cautions came out.

“Then the final pit exchange where we were looking to make something happen again on new reds a yellow came out right after we picked it basically and give it there normally sometimes helps you because it closes the pits but they waited for everybody else to pit. So we we lost out to the blend line and so I ended up losing three spots in that exchange, which which put us back to P seven and then just kind of finished out the race from there so not not a great day. You know, just kind of bad luck all day with the way the yellows are working out. They weren’t really favoring our strategy. But it’s good day for scot free after that and you know, we’ll go to the next one.”

I think we had a really incredible first stent. The car was super racy. I mean, we were passing people left and right. And just a real shame to see the yellow not get called. When there was a car off and a driver standing up and we’re still under green. I’m in a pretty dangerous corner. And now that was a real shame because it kind of worked against us. And some of the guys that we passed early on in the race ended up in front of us and tough to pass towards the end, but we were going forward really the whole time. So you know, to move up from 22nd hurts today. Getting to 13 is a good day for us. You know, I messed up in qualifying, so you know, gotta be perfect on these weekends and another solid race for us. We just got to get back into the top 10 When we go out next time

“I felt like I was strong again, doing things I used to do and moving forward. We were passing cars, we were moving forward and that encourages us a lot. There’s always things to iron out and get better but I think the results will come. I look forward to Nashville because I feel like we are getting to where we need to be.”

“It’s been an eventful race for the team I guess. Overall it was not the best day for the AJ Foyt Racing crew. On my end, I felt like we had a pretty hooked up car in the first stent. In warm up we tried something close to Kyle’s setup from qualifying and it wasn’t quite working for me which kind of goes to show you got to sort of figure out your own thing for your own driving style. So, we went back to our qualifying car and on the new reds, the car felt pretty good. It felt like it was really connected through the corner, and I was able to push through the sections from four to nine. We were running decently well and then got turned around by the 45 car which was unfortunate. On a restart everyone’s battling but not great when you get turned from behind but you’re not really in the mix for a pass for their battle right? So, a mistake on their part and that put us two laps down because it took them a while to get me going again. Losing two laps — that’s the hard part. On an oval you can make that back but on a short road course like this, you have to get supremely lucky and that didn’t happen. On the blacks and the scrubbed red set we were lacking a bit of mechanical grip through the rhythm section. But overall a tough day, hoping for something better at the home race in Toronto.”

“Had a bit of a disappointing end to that one and unfortunately ended with a bit of flames of behind us. Just coming to the final restart, I think it was p 11 and it just went on me, unfortunately. But you know, we’ll come back stronger to fight another day is a shame because we had great pace, especially on the blacks as well as reds. We struggled with a bit I had to get the balance back in the window at the first stop. But yeah, hopefully the guys can be happy with the performance up to that point. Next one’s Toronto street circuit. Yeah. That’s why I’m so excited.”

PATO O’WARD, 5 ARROW McLAREN CHEVROLET, ARROW McLAREN SP – FINISHED 24TH: “Today was a bummer. Apparently, the issue was something fuel delivery-wise, and it just kept getting worse and worse and worse. Then it just failed. It is a bummer and frustrating as we have thrown away, I think, an easy podium for us here. We had a lot of pace, and we’ve had a lot of pace throughout the weekend. The No. 5 Arrow McLaren SP Chevrolet was really well put together for qualifying and I tried to do my job the best I could.”

We had a good base for the race with the strategy as well we decided to go with the red tires for the start and then for the first stop, so I was feeling like we were in the group fighting with good pace. Suddenly I started to lose a little bit on the downshifts and then got stuck in here. Unfortunately, I think they guys did a fantastic job all weekend. So sad way to end this this race but hopefully, with all your help, we’ll be back in a couple of races more this year. Thanks for this opportunity.”

KYLE KIRKWOOD, NO. 14 ROKiT CHEVROLET, AJ FOYT RACING – FINISHED 26TH: “I’m not really sure. I’m gonna go back through the data, but wasn’t the same as Detroit, and figured the pressures were good felt like it was there and just couldn’t turn and bottomed out right in the middle of the corner and set the car sailing and the nature of the track is kind of increasing radius to that section. So, unfortunately for the 14 AJ Foyt crew, we didn’t get to get the finish that that we thought we deserved. We were doing solid this weekend. So we’re right there in the top 10 Fighting for seven eight nines really. Just unfortunate. Felt good this morning.”

It’s just unfortunate. I had a really, really, really good run. I feel for the No. 7 Vuse Arrow McLaren SP guys who worked so hard this weekend. I think we had a mega weekend going as were off strategy with the black tires and holding our position. We actually managed to move up from fourth to third, so yeah, it’s a big loss for the team.

“I just felt like we were sailing out there. I think we showed again we are up there and fighting for podium positions. We just have to come back and do better in Toronto.”