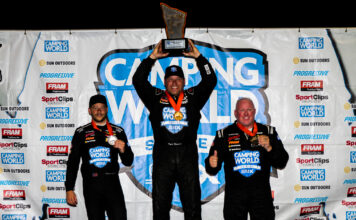 CBS Race Recap: A recap of tonight’s race can be found here.

Ryan Newman (Winner): “A really special night to win here tonight at Stafford. Amazing night for me in the SRX Series. I’ve got to thank Camping World, Sun Outdoors, everybody that makes this whole deal happen. For Bruton Smith and his family, this is special. For Bryan Clauson and his family, we got to park it in victory lane. I’m just really proud of everybody’s efforts collectively. To have my daughters here was so special. To beat the best between Marco (Andretti) and Paul (Tracy), Tony (Stewart) and all the guys that are a part of this deal. It’s so special to be a part of and then to beat them. I’m so honored to be a part of it and look forward to three more.”

Marco Andretti (Finished 2nd in the Main Event): “Ryan (Newman) did the bump, the same thing that everybody is going to try to do to win the race. He did it with perfect amount of laps left. I was screaming on the radio because I was driving blind, I didn’t know how many laps left to go, so I missed timed that. Overdrove, wheel hoped it at the end, but I’m learning so much from these Cup guys. They are just too good. I’m just trying to learn and trying to put it all together. We just need to keep doing what we are doing, maybe we’ll get a win. If I keep finishing where I’m at in the heat and getting good track position in the races, maybe we can win a championship.”

Paul Tracy (Finished 3rd in the Main Event): “A third for me felt like a win. The Oddschecker car was great all night. I’ve got to thank these guys at Camping World, Tony Stewart, everyone here, the Montag family, everything they do to put on this show for the fans. This is all for you guys. It finally felt good to get a good result all night and I’m looking forward to next week in Nashville. I ran good there last year, so I’m excited for next week.”

Tony Stewart (Finished 4th in the Main Event): “I needed to get down a little quicker and do a better job on that last restart. I got myself behind. This Good Sam car was fast and Tony Eury was my crew chief today and he made some awesome calls between the Heat races. I didn’t think I was very good in the heat races. I couldn’t get off the corner and I remember Doug Coby talking to me about this place last year and to make it through the center, you need forward drive and Tony gave me that in the main. I got going pretty good there and actually got myself a little tight and got off the bottom a couple of times and kept letting Marco (Andretti) get underneath me. I needed to back my pace down. A good run. This car was fast today.”

On the loud cheers when taking the lead:

“I like hearing that too. A, I like getting the lead and I love hearing the crowd cheer like that when we get the lead. That makes my night when I see that. Just appreciate everybody coming out here, everybody at Stafford, all the fans here, you guys make this trip so much fun to come here and race in front of you guys. It’s one of my favorite stops of the year.”

Bobby Labonte (Finished 5th on the Main Event): “I started eighth and made a couple of chargers there in the first heat and was trying to pass and got hooked. Went through the grass and came out last. Inverted the second race and won it. Started eighth and I got to fifth, almost fourth. Kind of run right there, but just got to where I couldn’t really get a drive up off to help. I’m kind of disappointed in that, but all in all, I guess it wasn’t too bad.”

Hailie Deegan (Finished 6th in the Main Event): “I had a great time. A great car and we had some fun with it. Made a few passes and it’s tough to pass here. I think just bringing this car back in one piece is going to help the guys over at the shop going to the next race. I feel like it was super competitive tonight. A lot of great drivers out here. When it comes to making moves or people slipping up, it’s definitely far and few. I had a great time and I’m very glad to be back here racing SRX. I’m pretty excited to go to Pevely after this.”

Ryan Hunter-Reay (Finished 7th in the Main Event): “This place is a blast. I really enjoyed this racetrack. I had a good first heat. Won that one and in the feature, I got stuck in second gear and couldn’t get up to third gear for the start. I had to do the start in the second gear and sat on the chip. Unfortunately, lost all the spots there. Kind of threw the night away getting stuck in gear. Man, it was a blast. This is definitely my favorite racetrack so far on the schedule.”

Matt Hirschman (Finished 8th in the Main Event): “It was a great experience. I would have liked to do better for sure. The couple of times I did get to mid pack, something took me back a little bit. On the last restart, Ryan Hunter-Reay didn’t go on the inside and backed up a little bit. I just never could get further than about mid pack, sixth or so. I certainly would have liked to do better, but that doesn’t take away from the experience that it was. It was an honor to be a part of this and I appreciate Camping World, SRX, everybody involved, and my sponsors, Offerpad, Rowdy Energy, High Point on the car. You just never know if you’ll have this opportunity again, so glad to have experienced it and if there is an opportunity agian, I’ll try my best to get back.”

Justin Marks (Finished 9th in the Main Event): “It was really cool racing SRX. I took me all day to start figuring out where I was going and I really only started figuring it out the last 10-15 laps of the race of how to drive these cars. It was really cool to be side by side with Tony Stewart, Ryan Newman and Greg Biffle, all these guys I grew up watching that honestly, motivated me to pursue a career in racing. That was great. Thanks to Camping World, Marcus Lemonis, everybody at SRX, Don Hawk for calling me this week and asking me to do this. I’m really proud he did. It was a life experience. I know there were only 12 cars in the race, but a top 10 feels good.”