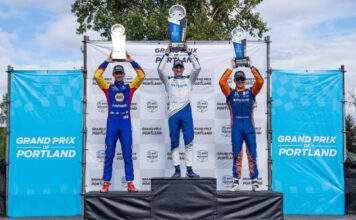 PORTLAND, Ore. (July 26, 2022) – The Grand Prix of Portland is just over five weeks away as Single Day ticket sales launch today at 10 a.m. PT for the NTT INDYCAR SERIES race weekend returning to Portland International Raceway (PIR), Sept 2-4, 2022. Tickets for the 28th running of this spectacular open-wheel racing tradition in the Rose City can be purchased online at portlandgp.com.

“We are very excited to welcome the NTT INDYCAR SERIES back to the Pacific Northwest for another thrilling edition of the Grand Prix of Portland,” said Jerry Jensen, general manager of Green Savoree Portland, which owns and operates the event at PIR. “The NTT INDYCAR SERIES has always provided exciting finishes at PIR, and we expect another exhilarating event as the championship enters its final stretch run.”

A limited quantity of 3-Day Gold Level Grandstand offering reserved seating for the highest rows are still available and include a Paddock Pass to get up close to the cars and drivers in the “locker room of motorsports.”

Additionally, Pit Passes remain available for purchase for guests 18 years of age or older. These passes provide access to pitlane during practice and qualifying sessions and can only be purchased in combination with 3-Day Grandstand tickets.

Children 12 and under receive free general admission to the event. This also includes complimentary access to the NTT INDYCAR SERIES Paddock throughout the weekend when accompanied by a ticketed adult. PIR is located less than a tenth of a mile from a public transit stop – the Delta Park/Vanport MAX Station on TriMet’s MAX Yellow Line – making a trip to the track exceptionally affordable for families.

For all ticket pricing, grandstand locations and additional festival information, visit portlandgp.com. Stay up to speed on the Grand Prix of Portland on social media all year long by following #PortlandGP.

About Grand Prix of Portland:

Portland International Raceway (PIR) is the home of the Grand Prix of Portland. PIR is a 1.964-mile, 12-turn permanent road course owned by the City of Portland and operated under the Portland Parks and Recreation. Opened in 1960 to host sports car and drag racing, the 268-acre property hosts over 550 events annually including automotive and motorcycle road racing, motocross, cruise-ins and other special events including the Rose Cup Races. PIR has been the site of many memorable Indy car races. Al Unser Jr. won the inaugural one in 1984, and the NTT INDYCAR SERIES returned in 2018 after an 11-year absence with Takuma Sato the winner and another Indianapolis 500 champion Will Power winning in 2019. The Father’s Day race of 1986 featured Mario Andretti victorious over his son Michael on the last lap by less than a second. The closest three-way road racing finish in INDYCAR SERIES history took place at PIR in 1997 when the top three were covered by just 0.055 of a second. The Grand Prix of Portland is owned and operated by Green Savoree Portland, LLC, whose affiliates also promote three additional INDYCAR SERIES races, Firestone Grand Prix of St. Petersburg presented by RP Funding (Feb. 25-27, 2022), The Honda Indy 200 at Mid-Ohio (July 1-3, 2022), and the Honda Indy Toronto (July 15-17).

Newgarden’s the man to beat at World Wide Technology Raceway