JEAN-FRANÇOIS DUMOULIN BACK IN THE NASCAR PINTY’S SERIES AT GP3R! 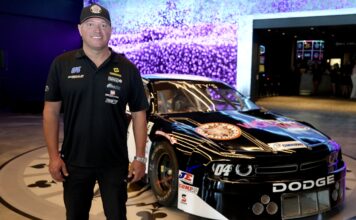 Trois-Rivieres (Quebec, Canada), August 3rd, 2022 – It’s finally Grand Prix de Trois-Rivières (GP3R) week, the most popular and best-known race on the NASCAR Pinty’s calendar, at least for Quebecers. This is the case for Jean-François Dumoulin, a native of Trois-Rivières, who is looking forward to representing the Mauricie region in the “The Rousseau Métal 60 laps presented by Julia Wine” event.

Jean-Francois Dumoulin unveiled a new partnership last week and the veteran is proud to count companies from our area among his partners. He will be driving the #04 car to show off the colours of his partners: Casino Grand Royal Wôlinak | Groupe Bellemare | Trois-Rivières Mitsubishi | Bernier Crépeau Chrysler Fiat | Omnifab.

“I’m always excited about the Grand Prix de Trois-Rivières,” said Jean-Francois Dumoulin. “We have had a great car in the last few years and our goal is to win. We will definitely be on the podium!”

In 2019, Jean-Francois Dumoulin finished 3rd, in 2021 he was 2nd. Following the timeline, it’s time for him to sign a first victory, at home, on the streets of Trois-Rivières!

“We will have a very busy weekend as a team with four cars prepared by Dumoulin Competition. Racing alongside Jacques Villeneuve will also be an important moment for my brother and I. We have grown up watching the achievements of the Villeneuve family and we are very proud to prepare a car for this great driver. This is not the first time we have had four cars in the GP3R and I am confident that we will be fighting at the front.”

It’s been a year since Dumoulin last competed in the NASCAR Pinty’s Series, prioritizing team management of his eponymous race shop, Dumoulin Competition, also partly owned by his brother Louis-Philippe. “I’m eager to get back into the series, the field is very competitive, however this is a track I know like the back of my hand, so I’m looking forward to the challenge!”

This year, spectators will be back around the circuit to cheer on their favourite drivers. As a Trifluvian, Jean-Francois Dumoulin has the attention of the fans who will be cheering him on throughout the weekend.

“I would like to thank everyone who will come and watch us at home, the fans are exceptional at GP3R, I always have a lot of fun talking to them, especially those who have followed our evolution,” he concluded.

·         Caught the attention of the renowned Player’s Driver Development Program scout (Formula Ford and Formula Atlantic), became one of the youngest drivers ever to be recruited, and was touted as a strong contender for the championship title in Formula Ford (1996 and 1997 seasons);

·         In Montreal’s 2009 edition of NASCAR Nationwide, he finished his first race in 7th position aboard a badly damaged car and won the hearts of numerous fans and reporters;

·         In 2000, he was the Motorola Cup Series Vice-Champion, during a season that included a 1st place podium finish after having begun the race in 52nd position at the Molson Indy event in Ontario, Canada.

The Casino Grand Royal Wôlinak is a 35,000 sq. ft. entertainment centre managed and operated by the Wôlinak Abenaki First Nation. Housing a gaming lounge, over 450 slot machines, VIP poker tables and a wall of interactive games, the building also includes a high-end restaurant run by a famous Trois-Rivières chef and an arena that seats over 1,000 people for events. The restaurant and sports bar can seat over 200 people and features the latest sporting events, and the option to place sports bets on site or online – grandroyalwolinak.com

Groupe Bellemare is a 3rd generation family business that has been serving clients since 1959. Today, the company has more than 500 employees and provides them with an innovative work environment facilitating work-family balance and a healthy and safe quality of life. With over a half-century of experience and its sustained R&D efforts, the Company offers high-quality products and services in areas as diverse as concrete, abrasives and minerals, dimensional load transportation, and recycling. Groupe Bellemare is also very involved in its industry and attaches great importance to its social and environmental role as a member of the business community. Groupe Bellemare makes a positive contribution to the quality of life of citizens in the communities it serves by supporting numerous social causes and promoting local purchasing through its responsible procurement practices – groupebellemare.com

Bernier Crepeau Chrysler Fiat: With 25 years of experience, the family business has built an enviable reputation in the field of vehicle acquisition. If the future of this company is linked to the loyalty of its customers, it is also held by the reliability and strong communication of its team. This team is at your disposal, ready to listen to you, to hear you. Passion, care, and determination. A team willing to go the extra mile, with its ears wide open – berniercrepeau.com

Omnifab. Since it was founded in the 90s in Louiseville, Omnifab has continuously improved and reinvented itself to better serve its customers. This is essential in a sector such as industrial mechanics, where technologies and needs are constantly evolving. However, some things should stay the same. Our products and services have continued to meet high quality standards because we stay true to our vision and values and share them with our employees – omnifab.ca/en/.

Dumoulin Competition: Jean-François and Louis-Philippe Dumoulin founded the Dumoulin Competition Race Team in 2009. Working with financial, marketing, logistics and sports management experts, they built up a solid business structure. Dumoulin Competition prepares its on race cars in-house since 2016. Their motto: “Passion – Performance – Partnerships” expresses their will to perform on the track and offer their partners maximum visibility and profitability in return for their commitment. Their vision: To become Canada’s leader in motorsports through track performance, entrepreneurial and human values – dumoulincompetition.com.