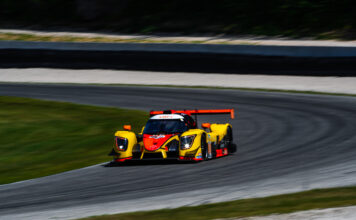 Ari Balogh and Garett Grist faced the elements in the No. 30 Airbnb Ligier JS P320 as they made their way from seventh to fourth over the two hour and 40 minute race distance on the high speed 4-mile circuit in Wisconsin. The fourth place finish continues the pursued progress of the Charlotte-based IMSA WeatherTech SportsCar (IWSC) team, having made its debut in the top tier series at Road America in 2021.

Although precipitation didn’t fall much heavier than a mist, slide offs and the ensuing debris caused four total caution periods, with the first on lap 14. The first yellow brought Balogh to hand the car to Grist from fifth as he kept the No. 30 Airbnb Ligier clean and out of trouble during his stint.

By the third full course yellow, Grist had powered up through traffic from sixth to fourth, making an excellent move in the final hour of the race continually matching the speeds of his competitors.

Persistently battling for podium position, Grist pushed to stay with his opponents but had to settle just shy of the podium as he brought the Ligier home fourth in the order.

“It was a bit of a crazy race with lots of cautions and changing weather conditions,” said Grist. “Ari did an incredible job in his first stint keeping the car clean and staying on the track as a lot of other guys were going off and hitting other cars. Good start to the race in that way, but as the race went on, I struggled a bit with pace. I could stick with the cars ahead of me and then we would be even for a bit because we were similar, but I couldn’t get around them exactly. The team worked really hard this weekend and everything was perfectly prepared once again, so a great job by the crew all weekend. We’ll keep moving, keep testing and keep getting better.”

The North Carolina-based crew, which boasts a lot of team members with a range of competition experience including in the NASCAR ranks, developed several approaches to set-up through the weekend to try to keep up with the continually changing weather and track conditions.

“We did what we could this weekend,” said team owner Billy Glavin III. “We really tried to find the pace, but unfortunately, we never got exactly what we needed, especially with the red flags in the practice, we just didn’t have all the time we needed to get up to pace.”

Now third in the championship standings, Jr III Racing will compete again in the IWSC season finale at the Motul Petit Le Mans at Michelin Raceway Road Atlanta on October 1.