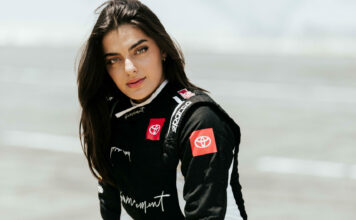 “I am grateful for Toyota Racing Development and Nitro Motorsports for having me as a full time driver for the inaugural season of GR CUP North America,” said Breidinger. “I grew up racing go-karts and when this opportunity was brought to me, I was so excited to take on the challenge and drive the Toyota GR86.”

Breidinger will drive in 14 races taking place over 7 weekends on road course circuits around the country including classic tracks such as Circuit of the Americas (Austin, TX), Road America (Elkhart Lake, WI), Sonoma Raceway (Sonoma, CA), and others.

“When the GR CUP by Toyota Gazoo Racing North America was announced, we knew Nitro Motorsports needed to be part of the program. When considering possible drivers with Toyota Racing Development, Toni was suggested and we immediately knew she would be the perfect fit,” said Nitro Motorsports owner Nick Tucker. “We are thrilled to have Toni as part of Nitro Motorsports and are looking forward to working with her on the track in 2023.

The GR Cup is Toyota’s all-new single make racing series. 14 events will be held at 7 prestigious circuits across the United States where race fans and series participants will get to experience Toyota’s unmatched passion for motor racing and car culture.

Each GR86 will start as a complete factory vehicle before GR engineers in North Carolina transform them into reliable, high-performance race cars. This signature spec series will showcase the full power and potential of the GR86.

At just 23 years old, 19-time USAC winner Toni Breidinger is the first female Arab driver of NASCAR. Toni currently competes in NASCAR’s ARCA Menards series with Venturini Motorsports, a Toyota Racing Development team driving the #25 Toyota Camry. Breidinger currently sits 5th in points in her rookie season. Breidinger, a California native, began go karting at 9 years old at Sonoma Raceway with her twin sister Annie. Building a vast social media following of 2.8 million followers has made her one of the most powerful drivers in NASCAR on social media. Her success has not gone unnoticed with brands such as Free People, Huda Beauty, Lenscrafters, Sunny D, Sparco, and Bell Helmets partnering with Breidinger on the track. She has appeared on Ellen and The Today Show following her NASCAR debut at Daytona as well as in print in the New York Post, GQ, Marie Claire Arabia, People, and CNN.