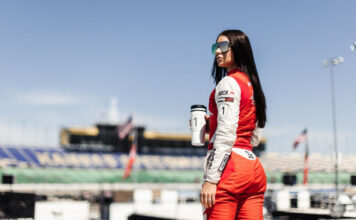 A dismal summer stretch has been flattened with respectable finishes over the past three races, but the final intermediate race of the 2022 season brings a sense of excitement and optimism for the Mooresville, N.C.-based team.

In May, Balcaen impressed with one of her most astounding performances of the season where she started 13th in her No. 30 ICON Direct Ford but hustled to an impressive ninth-place finish.

With the bigger mile-and-a-half tracks fitting into the popular driver’s niche, Balcaen returns to Kansas Speedway in hopes of capturing her fourth top-10 finish of the season.

“I am really excited to go back to Kansas Speedway because it will be the first time this season that I have had experience at a certain race track,” said Balcaen. “I think this will be a huge advantage for our team having already gone there this year knowing that I have developed some comfortably with the track.”

Like any rookie driver wanting to make their second appearance better than their first, Balcaen is determined to utilize what she learned during May’s Dutch Boy 150 that will give her an opportunity to better her season-high finish of seventh earned at Charlotte (N.C.) Motor Speedway in May.

“The first time at Kansas, I used both practice and the race to learn the line, get comfortable with the track, get into a rhythm, and improve speed,” she explained. “Now having already been there, I’m expecting us to be up to speed much quicker in practice so we can work on getting the car dialed in for the race so we can have a really strong run.”

With Kansas marking the first career top-10 in Balcaen’s young ARCA Menards Series career, she is hoping the return to the Midwest will offer the confidence she needs to not only challenge to better her season-high finish but even propel her Mark Rette-led team into the top-five for the first time this season.

“I really enjoyed Kansas the first time, so I know I will enjoy it even more going back! It was also our first top 10 of the seasons that gives good confidence knowing we can back that up again,” Balcaen added. “I enjoy the bigger tracks so am looking to have a carrier best finish this Saturday night.”

After getting dumped in her most recent race at the Du Quoin (Ill.) State Fairgrounds while running in the top-10, Balcaen knows the time is running out before the end of the season to become the first female competitor to win in the premier ARCA Menards Series – but while winning may not be at the top of their agenda, delivering as many top-10 finishes before the season-finale at Toledo Speedway next month is.

“I feel we have shown good speed most of the year, we just don’t have the finishes to back it up which is pretty frustrating but part of racing,” explained Balcaen. “At least knowing we have speed gives me some confidence that I can do this, and just need to keep pushing forward.

“Rette Jones Racing has given me fast cars good enough to run inside the top-10 and even the top-five this season. I’d love to win. That’s what we set our hearts to do every single time we hit the track.

“A win in the ARCA Menards Series though is never easy and if we can’t be in that position to win this weekend or for the four remaining races – then for sure we are going to attack and fight to put our No. 30

“We have endured more than our fair share of bad luck this season. Too much in fact. But as a team, we rise above the negative and feed off the positives. I think Kansas can be that opportunity to put a huge smile on our faces.

“We have four races left to showcase some good finishes. As long as luck is on our side, we should be able to add some more top 10s to the season.”

For crew chief and co-team owner Mark Rette, he continues to be proud of the resilience of his young driver and believes the stretch drive to the end of the season will be the team’s strength.

“Yes, Du Quoin was a major bummer but the speed that Amber continues to showcase is the backbone of our race team,” offered Rette. “We have worked hard to make sure we come to the track each week and give her the best race car possible. Du Quoin was another race where she wasn’t respected on the track and we all paid the price with a less than satisfying finish.

“With all that said, we’re upbeat about returning to Kansas at a track she knows and feels good about it. I’m expecting big things from Amber on Saturday night to further showcase her ability but also keep our team and partners in the spotlight.”

ICON Direct will continue to adorn the primary positions on Balcaen’s race car in their 17th of 20 races this season.

Entering Kansas, Balcaen sits seventh in the ARCA Menards Series championship standings, 56 points out of fourth and 164 markers in the arrears to championship leader Nick Sanchez.

“Mark (Rette) and the entire RJR team have worked their butts off this year,” sounded Balcaen. “It hasn’t been easy with the schedule and the number of DNFs we’ve had but they have kept plugging away to put good cars together to bring to the track for me week in and week out.

“I have learned a lot as a driver from Mark, he’s really helped improve my knowledge and skills. I get so much support from all the guys on my crew and feel they really believe in me which is super important for a team to have belief in their driver. I am very grateful for all of them.

“I want to still put together some top 10s and hopefully even some top-fives by the end of the season. I know we have it in us. I think our bad luck streak must be over by now and I am focusing on the positives of the speed and progression we have shown.”