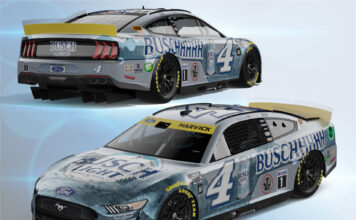 ● Kevin Harvick comes into the Bass Pro Shops Night Race at Bristol (Tenn.) Motor Speedway in a must-win situation. The driver of the No. 4 Busch Light Ford Mustang for Stewart-Haas Racing (SHR) is last among the 16 drivers in the NASCAR Playoffs. Only the top-12 drivers in points after Bristol advance to the next playoff round, and with a 35-point deficit to overcome, Harvick needs a victory to earn an automatic pass to the Round of 12. As drastic as the scenario is, it’s relatively familiar to Harvick and the No. 4 team. After all, they had to win to even make this year’s playoffs. Heading into the fourth-to-last race of the regular season at Michigan International Speedway in Brooklyn, Harvick was winless and 96 points out of the top-16 cutoff to make the playoffs. But after 400 miles of racing at Michigan, Harvick was the one holding the checkered flag and a punched ticket to the playoffs. The win vaulted Harvick into the postseason, and to further solidify his standing, Harvick won the very next week at Richmond (Va.) Raceway.

● Harvick has won 60 NASCAR Cup Series races, tying him for ninth on the series’ all-time win list with Kyle Busch. Twenty-six of those victories have come at playoff tracks, and since the advent of elimination rounds in 2014, Harvick has scored 11 playoff victories. Of those, three were must-win situations:

● Harvick is a three-time winner at Bristol, and his last two victories at the .533-mile oval have come in the Bass Pro Shops Night Race. Harvick’s first NASCAR Cup Series win at Bristol was in April 2005. It was his ninth start at the high-banked, concrete-clad track, and Harvick beat Elliott Sadler by an impressive 4.652 seconds for his fifth career Cup Series victory. It would be another 23 races before Harvick scored his second Bristol win. In the 2016 Bass Pro Shops Night Race, Harvick beat Ricky Stenhouse Jr., by 1.933 seconds to take his 33rd career Cup Series victory. Harvick only had to wait four years to collect his third Bristol Cup win. He won the 2020 Bass Pro Shops Night Race in dominating fashion by leading four times for a race-high 226 laps, including the final 32 tours. Harvick beat Kyle Busch by .310 of a second to take his 58th career NASCAR Cup Series victory, his third at Bristol and his 35th since joining SHR in 2014.

● How did Harvick do in his last race at Bristol? It doesn’t matter, because the track was covered in dirt. Harvick finished 34th in the April 17 Food City Dirt Race after getting collected in an accident. With 1,209 laps led on Bristol’s concrete and zero laps led when it has been covered in dirt, count Harvick among the drivers happy to return to traditional racing at Bristol.

● The Bass Pro Shops Night Race will be Harvick’s 42nd career NASCAR Cup Series start on Bristol’s concrete. He and Kurt Busch each have 41 starts at Bristol, the most among active Cup Series drivers. The only active driver even close to them is Kyle Busch with 32 starts. In fact, there are only two other active drivers with 30 or more starts at Bristol – Denny Hamlin and Martin Truex Jr., with 31 starts apiece.

● Harvick has proven prolific at Bristol outside of the NASCAR Cup Series. He has made 29 NASCAR Xfinity Series starts at the track, winning five times and scoring 15 top-fives and 24 top-10s while leading 1,217 laps. Harvick also has five NASCAR Camping World Truck Series starts at Bristol, winning once and finishing in the top-10 in his last four starts on the concrete surface.

● Riding along with Harvick in the Bass Pro Shops Night race at Bristol is a decal commemorating the Tyler R. Christman Foundation, a 501(c)(3) nonprofit organization established in Christman’s honor after the 14-year-old from Upstate New York tragically died upon collapsing on the football field. Christman was an athlete and racer from Carthage, New York. He played football for Carthage High School and raced Bandolero and Legends cars at nearby Evans Mills Raceway Park. He was the New York State Bandolero INEX champion and also earned a track title at Evans Mill, finishing no worse than second in every season in which he competed. Christman was an organ donor, whose organs saved the lives of five people. The Tyler R. Christman Foundation serves Carthage and the surrounding area, with a focus on supporting local youth sports and providing scholarships to local high school graduates. Those scholarships began this year, with three $700 scholarships awarded to graduating Carthage High School seniors. #LiveLikeTyler27 is the mantra for the foundation, and donations can be made via its Facebook page.

Kevin Harvick, Driver of the No. 4 Busch Light Ford Mustang

You’re in a must-win situation Saturday night at Bristol. What sets you apart from the rest of the playoff drivers who are also trying to advance to the Round of 12?

“Experience. I think experience goes a long way as you go down this road. Obviously, it’s different than the regular season because there’s so much on the line, but our guys have been through that battle. Plus, we don’t have anything to lose.”

How do you approach this cutoff race at Bristol?

“For me, just continue to be open-minded about how to drive the car, what to do with the car, give good feedback. From the team standpoint, being open-minded is what led us to having the setups evolve and the cars evolve from the guys at the shop, and that constant evolution is a part of the process of developing the car. It’s still very open for development and to find things and be able to hunt for speed. For us, just understanding what we’ve got as far as the car goes, and how do we maximize the potential of our car and not worry about what everybody else is doing. That’s something that we’ve always done a good job of, just to be narrow-minded, worry about our own problems, look at the outside world and take it with a grain of salt to be able to adapt some of the things that work for other people, but you still have to develop your own program and do the things that work for you.”

To win at Bristol and really anywhere, you need both luck and teamwork, but does one outweigh the other?

“I can tell you that having the car run well is a much higher piece of the equation. When I say that, especially in the position that we’ve been in, it’s been all hands on deck because in order to get your cars from not where you want them to winning cars is very difficult, especially in a scenario like we are with the new car where we don’t know everything about it. We’re learning on the fly as we race week to week about the characteristics of the car, and the track and the tires and, from my standpoint, the different characteristics of how to drive the car, what it likes and what it doesn’t like. We’re kind of learning that all along the way. The biggest key for us in order to get our cars back to being capable of winning has been the experience of the team, and communication lies in that category. We have to have honest conversations with each other, like, ‘I agree with that, I don’t agree with that,’ and not having anybody’s feelings get hurt is something that our team does a very good job with. I always felt like that was one of our strongest points when we had practice throughout the weekend. We could take a terrible car or we could take a car and experiment with it, not make many laps, and say we need to do this, and this, and this, to start the race and everything’s going to be fine. I think the experience of our team and having those relationships with each other that are honest and being able to communicate with each other like adults is very important. You can get into great depth with each other and be honest with each other to progress in the right direction.”

Bristol represents a bit of an unknown because you haven’t raced there this year, at least on its concrete surface. What are you expecting at that track with the NextGen car?

“As we’ve gone through the year with this particular car, we’ve realized there are a number of unknowns that come with the car and things that you don’t think about unless you race. The characteristics of the car, and the tire that they bring, and what you’re going to fight, combined with the short amount of time you have to practice, along with all the known characteristics that you’ve had in the past might be different, might be the same, might be worse, might be better. There’s just really no rhyme or reason to things that have happened this year. You just have to be really open-minded to adjust and adapt quickly to whatever happens. That usually happens after qualifying. You’re still limited on the things that you can do, but for us, hopefully our tire model’s close and hopefully our tire test information that we have and the simulator models that we have for tires and grip levels work out well. If not, it could be a long night.”

What makes the Bass Pro Shops Night Race such a special event?

“The Bristol Night Race has always been an event that seems to just bring the best out of everybody, as far as competition and chaos. For our sport, it’s just been that bookmark that always shows up every year, that always creates excitement. There’s always a full house and the crowd is always there to see the action. Year after year, it lives up to that, and now it’s part of the playoffs.”

Bristol at night has a different vibe, as if there’s more adrenaline flowing. Do you feel that way too?

“Bristol, the night race, especially, is a place that just has a special feel. Being in the playoffs now and being a part of that event for a long time just gets you jacked up as a driver. It’s just a very intense place to race. It’s an intense place to just make laps, honestly. As you get into that race and understand the magnitude of the situation, especially with Bristol being in the playoffs, it’s something that I just think is very challenging and exciting to be a part of.”

How do you stay out of trouble at Bristol?

“As Bristol goes, you can wind up in somebody else’s mess. You can create your own mess too, but it’s usually something that’ll jump out and bite you in a hurry. As soon as you let your guard down, something happens, and the next thing you know, your hood’s up over your windshield because they’ve spun out and wrecked, or you’ve been hit in the back, whatever the case may be. It just happens really quickly there. Bristol is a high-speed racetrack, but it’s also a racetrack where you can’t see the exit of the corner until you round the center part of the corner. Sometimes you come up on the wrecks before you even see them, and you can hit stuff really hard there.”