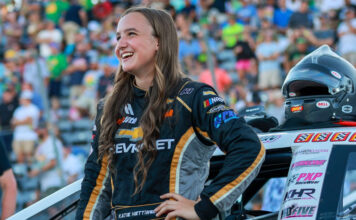 ● In the span of two weeks in September 2021, Hettinger became the youngest female race winner at North Carolina’s Hickory Motor Speedway when she won the 50-lap Limited Late Model feature Sept. 4 as part of the Bobby Isaac Memorial event. She then became Hickory’s youngest female Late Model race winner on Sept. 18 when she won the track’s 75-lap feature, further burnishing Hickory’s moniker as the Birthplace of the NASCAR Stars.

● Hettinger has won four more Late Model races at Hickory in 2022 to become the winningest female racer in the track’s 72-year history.

With those accomplishments firmly in hand, despite a Michigan driver’s license remaining out of reach until the Dryden native turns 16, Hettinger is preparing for her next step on the racing ladder. On Oct. 14 at the Las Vegas Bullring, Hettinger will make her debut in the ARCA Menards Series West. In fact, it will be the first of two ARCA races for the high school sophomore, as Hettinger will also compete in the West Series finale Nov. 4 at Phoenix Raceway.

“Anytime I get in a racecar, my goal is to win, but ARCA is a step up with strong teams and talented drivers, so the more realistic expectation is to finish Las Vegas among the top-five and, ideally, the top-three,” Hettinger said. “Phoenix is a bigger track – the biggest one I’ll have ever been on – so that will be a little more challenging. A top-10 at Phoenix would be great.”

Hettinger will compete in both races with Young’s Motorsports, driving the No. 02 Chevrolet with support from Wheeler Trucking, a leader in automotive transportation services, and bradCM Incorporated, a privately owned and operated general contracting firm.

The .375-mile Las Vegas Bullring is akin to many of the short tracks Hettinger has experienced in Late Models. Phoenix, however, is a fast and flat, 1-mile oval that hosts the championship finales for NASCAR’s top-three series – Cup, Xfinity and Camping World Truck.

“Every time I get into a new car, I just drive it like I normally would,” said Hettinger, who has made over a hundred starts in Late Model and Limited Late Model competition. “I don’t usually struggle with switching classes or cars or anything like that.”

Nonetheless, Hettinger is aware that ARCA represents a new style of racing, and she is already putting in the time to adapt to the 3,400-pound ARCA car.

“I want to make sure I’m successful when I get to the Las Vegas Bullring and when we race at Phoenix, so we’re testing with the ARCA car and I’m doing a lot of sim training before and after those tests,” Hettinger said.

Hettinger is a third-generation racer who attended her first race at only four weeks old. Her grandfather, Jim Hettinger, raced open-wheel Midgets and Sprint Cars and won two Midget championships in 1984 and 1990, accolades that earned him a spot in the Michigan Motorsports Hall of Fame. Her father, Chris Hettinger, was also a winning open-wheel racer, primarily in Midgets. It wasn’t long before Katie’s name began appearing on entry lists and at the top of race results.

By age five, she was racing Quarter Midgets. At first, it was only locally, but soon Hettinger was racing regionally and then nationally, collecting more than 40 wins.

At nine, she moved up to Junior Sprints and 600cc Micro Sprints, competing on dirt from 2016 through 2018. But pavement beckoned. An 11-year-old Hettinger transitioned to full-bodied stock cars in the CRA Junior Late Model Series and she proved to be a quick study.

After finishing fourth in the 2019 championship and earning the Sportsman of the Year award, Hettinger upped her game in 2020. She took two wins and earned three fast-time awards, one of which set a new track record at Anderson (Ind.) Speedway, and ended the season as the 2020 CRA Junior Late Model Series champion.

Since turning 14 in June 2021 and getting her NASCAR license, Hettinger scrapped the “Junior” tag from her Late Model. She regularly competes at the highest level of local stock car racing, commuting from Michigan to race in the southeastern hotbed of the NASCAR Weekly Racing Series, with the .363-mile Hickory oval being one of Hettinger’s more frequented tracks.

“I’m proud of what we’ve been able to accomplish at Hickory, but I didn’t go there to become the winningest female racer. I went there to win races, just like all the other guys there,” Hettinger said. “I’m the same as everybody else. I’m just there to win races.”

With four wins in her eight visits to Hickory this year, Hettinger has accomplished her goal. Making those triumphs even more impressive is that Hettinger has done it while juggling school in her home state of Michigan. Three of her wins this year came while she was a freshman at Almont High School – April 30, May 7 and May 21. Her most recent victory on July 23 was the only one to come while she was out of school on summer break.

“I juggle everything I do with sports and school and it can be hard sometimes, but a lot of people are very understanding and I’m able to stay on top of it,” said Hettinger, an avid outdoorswoman who also enjoys hunting and fishing. “I still get mostly A’s and some B’s, and I play a lot of school sports, so sometimes I miss a volleyball game or a basketball game but, overall, I’m able to manage it.”

Beyond the pit crew that helps her at the track, Hettinger has the full support of her family as she chases her NASCAR dream. This includes her 12-year-old sister Grace and 4-year-old brother Keith.

“My mom and dad are very supportive and understanding, and my sister is a competitive dancer and plays volleyball. My little brother loves racing and he always wants to go see Katie’s racecar. They’re all in this dream as much as I am.”