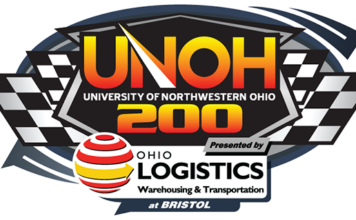 Hailie Deegan qualified 18th for the UNOH 200 presented by Ohio Logistics at Bristol Motor Speedway. Immediately after taking the green flag, the 21 year old noted the truck would need to turn better in order to make progress despite running top-five speeds in the early going. She began stage two in 14th, electing to short-pit with 15 to go and attempt to carry out the remainder of the race. The strategy would pay dividends as the Monster Energy Ford F-150 went from 28th to 17th to close Stage 2 and restart in seventh when the remaining cars pitted, Deegan ran as high as sixth before her older tires started to show, eventually rendering her to a 14th-place finish despite spending the majority of the final stage fighting within the top-10 on old tires.

Tanner Gray qualified 26th for UNOH 200 and was up to 21st when the first yellow flag was displayed on lap 38. Fighting an extremely loose F-150, Mike Hillman Jr. called the No. 15 down pit road for adjustments with the intention of staying out at the stage break. Gray rejoined the field in 22nd and finished Stage 1 in 18th. The track position proved beneficial at the start of Stage 2 as Gray fired off ninth and advanced to seventh by stage end. The team focused on helping the front turn of the during the second stage break and the Ford driver lined up in 19th for the final stage. Gray battled hard and searched all over the half-mile track trying to drive forward throughout the remainder of the race, but the difficulty to make passes proved too much and he crossed the finish line in 17th.

Taylor Gray qualified 17th for Thursday’s 200-lap event at Bristol Motor Speedway. The Dead On Tools F-150 fought some instability early as Gray was too free in the center. During the first round of pit spots, the No. 17 fell to the back of the field after a hangup on the left side. However, the balance returned to Gray’s F-150 as the night wore on, climbing to fifth following a cycle of pit stops to end Stage 2. Some more gremlins would plague Gray during the final stage, with the truck repeatedly popping out of gear while sustaining a hole in the right front. Needing valuable track position, Gray refrained from any additional pit stops the rest of the night. With passing being quite tricky throughout the race, Gray worked his way back to 16th before the checkered flag flew at Bristol Motor Speedway.

Next event: Talladega 250 at Talladega Superspeedway in Talladega, Alabama on October 1 at 12:30 p.m. ET.