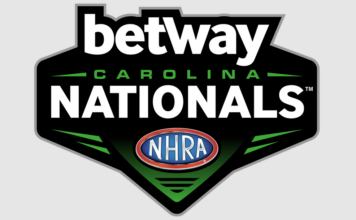 DETROIT (Sept. 22, 2022) – Chevrolet teams and drivers enter Round 2 of the National Hot Rod Association (NHRA) Countdown to the Championship seeking to add significant points to their totals at a familiar racetrack.

When zMAX Dragway hosted the NHRA Camping World Drag Racing Series four-wide event on May 1, John Force had another weekend to remember by sweeping to the No. 1 Funny Car qualifier honor and going on to record career victory No. 155. Teammate Robert Hight was runner-up.

This weekend, the facility in Concord, North Carolina, will be the site of conventional match racing and include the Pro Stock category that did not compete the first time around.

Hight, driver of the Automobile Club of Southern California Chevrolet Camaro SS, will aim to put more distance between himself and Funny Car championship pursuers. The front-runner earned his seventh victory of the season and 60th of his career Sept.18 at Maple Grove Raceway.

“It’s one down five to go. We have to focus and try to get the same job done again. If you can do that early on, you’re going to put some pressure on these guys,” said Hight, a six-time winner at the track.

Force, driving the PEAK Antifreeze and Coolant Camaro SS, is fourth in the standings – only 16 points out of second place – as he takes aim at his 17th Funny Car world championship. He advanced to the semifinals at Maple Grove in the Countdown opener.

Brittany Force, the No. 1 qualifier at Maple Grove, is only nine points behind the Top Fuel points leader as she looks to regain the top spot in the Flav-R-Pac/Monster Energy Chevrolet dragster. She was the No. 1 qualifier and runner-up in the 2021 fall race at zMAX Dragway.

﻿Teammate Austin Prock has renewed confidence after picking up his second career Top Fuel win, driving the Montana Brand/Rocky Mountain Twist Chevrolet dragster to victory at Maple Grove Raceway. He is sixth in the standings.

Kyle Koretsky won the Pro Stock race last fall at zMAX Dragway, defeating KB Racing teammate Greg Anderson in the final. Both will challenge for the victory this weekend as they look to reel in points leader Erica Enders.

Enders, driving the Melling Performance/Elite Motorsports Chevrolet Camaro SS, claimed her seventh victory of the season and 40th of her career in the Countdown opener to widen her points lead. Anderson, driver of the HendrickCars.com Camaro SS, moved to second in the standings, while Koretsky is third in the Lucas Oil Camaro SS.

BRITTANY FORCE, JOHN FORCE RACING, FLAV-R-PAC/MONSTER ENERGY CHEVROLET DRAGSTER (four-time winner this season; second in points): “Charlotte is second on the Countdown list and after a challenging weekend our Flav-R-Pac team is ready to get the event started. First priority is to get back on track with solid qualifying. We will be looking for three consistent qualifying runs to get us in the top of the show. Every point matters and we have a shot to pick up some points with good qualifying runs. Race day we need to be going rounds. This Countdown is short and we need to step it up and will be hunting down a win this weekend.”

AUSTIN PROCK, JOHN FORCE RACING, MONTANA BRAND/ROCKY MOUNTAIN TWIST CHEVROLET DRAGSTER (won last week at Reading): “(The Maple Grove win) was exactly what we needed. If we want to play for the big trophy at the end of the year we had to win (the Countdown opener). Just really proud of this team. It’s been a trying year and everyone has kept their heads down and still believed in themselves and you keep that attitude and you end up with a Wally. We’ll have more confidence rolling in (to Charlotte). We have some momentum going. People get on rolls and sometimes they stay on a roll and this is a perfect time to do it for us. We’re going to focus on one round at a time like we did in Reading and see how things shake up. Anything is possible.”

JOHN FORCE, JOHN FORCE RACING, PEAK ANTIFREEZE AND COOLANT CHEVROLET CAMARO SS (Charlotte four-wide winner in spring; fourth in points): “Everyone (at John Force Racing) is in the hunt. Robert may just run away with it. But this PEAK Chevy, we’re still in the mix, still five races to go. Brittany will be good, still up in the top. That Montana Brand car, we’ve been working hard to get that car back in the mix, and they’ve got a chance. We head right to Charlotte where we’ll have another shot at it. Keep on trying to get the job done.”

ROBERT HIGHT, JOHN FORCE RACING, AUTO CLUB OF SOUTHERN CALIFORNIA CHEVROLET CAMARO SS (seven-time winner this season; points leader): “It’s one down five to go. We have to focus and try to get the same job done again. If you can do that early on, you’re going to put some pressure on these guys. Seven wins is not going to get the championship. We’re going to have to get more than what we have and keep this rolling to win this championship. This is just getting started.”

ERICA ENDERS, ELITE MOTORSPORTS, MELLING PERFORMANCE CHEVROLET CAMARO SS (seven-time winner this season; points leader): “This Countdown is going to be a dogfight as it is early single year and giving up that 200-plus point lead coming in doesn’t help. We know we have to capitalize on every moment, execute perfectly. It’s hard to win a round let alone a race. I am stoked to start the Countdown on the right foot, to get that jump on everybody. I would rather that than to make a comeback as the race close out at the end of the year. We just have to continue the trend. Momentum is huge in any sport and we just hope to carry it.”

GREG ANDERSON, KB RACING, HENDRICKCARS.COM CHEVROLET CAMARO SS (reigning Pro Stock champion; second in standings): “We lost ground to the leader and we’re second, but we’re not fighting for second. We’re fighting for first. We had a bit of a rough weekend. We didn’t qualify like we should have and just had some things going on that were out of the ordinary. We had some engine issues; the engine was wanting to stumble in low gear right off the starting line to get to 60 foot properly. We’ve been working on things back at the shop. We’ve got to get that figured out because you’re not going to beat these other racers if you’re not 100 percent. (This weekend) the air is going to be good, the weather is going to be perfect, so the cars will be fast. We have to get that 60-foot time back down to where we need it and then we can contend for the win again.”

KYLE KORETSKY, KB RACING, LUCAS OIL CHEVROLET CAMARO SS (won 2021 fall race at track; third in standings): “I would like nothing better than to repeat what we did at zMAX Dragway last year. We’re coming off a semifinal round loss at my home track — Maple Grove Raceway — where we qualified third. It was a good weekend to kick off the Countdown, but we want to go more rounds with the Lucas Oil Chevy. We’ll try to do that this weekend in Charlotte.”

DALLAS GLENN, KB RACING, RAD TORQUE SYSTEMS CHEVROLET CAMARO SS (Gainesville winner): “Racing at home is always something we look forward to. We didn’t get to race here in the spring so I’ve really been waiting to get back to zMAX. We hurt our good engine last weekend but we were able to get it back together with minimal damage right in time for this weekend. We’ve got our eyes on the winner’s circle.”

CAMRIE CARUSO, CARUSO FAMILY RACING, TEQUILA COMISARIO CHEVROLET CAMARO SS (first season in Pro Stock; No. 1 qualifier and runner-up at Houston): “We are in the Countdown. We just have to work a little harder to win this championship. I am happy with how well my team has pulled together and hopefully we can do some damage over these next five playoff races.”