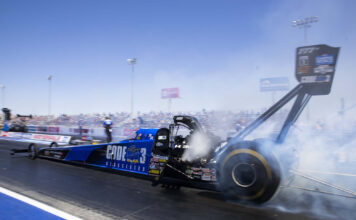 ● The Betway NHRA Carolina Nationals near Charlotte, North Carolina, is the 18th race on the NHRA Camping World Drag Racing Series’ 22-race schedule and it serves as the second round in the six-race Countdown to the Championship. Tony Stewart Racing (TSR) drivers Leah Pruett and Matt Hagan are eyeing a title run in their respective Top Fuel and Funny Car divisions. This year’s Countdown marks Pruett’s sixth appearance in the NHRA postseason and Hagan’s 11th.

● Code 3 Associates, a 501(c)(3) non-profit organization specializing in animal rescue and recovery in disaster areas, and it has gained notoriety among the NASCAR community for its association with Stewart and his NASCAR team, Stewart-Haas Racing. The successful partnership has led the Colorado-based organization to deepen its motorsports involvement by partnering with TSR in the NHRA Camping World Drag Racing Series. Formed in 1985, Code 3 Associates has evolved from one unpaid volunteer to at least 75 professional responders around the country, which includes animal welfare, law enforcement, fire, EMS and veterinary specialists from the United States and Canada. While its focus is animals and their owners, Code 3 Associates trains its responders to the standards of human rescue, and Code 3 Associates also provides training to conduct thorough investigations into animal welfare, all of which is accredited by Colorado State University (CSU) and the CSU Veterinary Teaching Hospital. Code 3 Associates is currently in the midst of hurricane season, and they’ve compiled a list of ways to prepare for a disaster.

● Shelor Motor Mile is a family-owned car dealership serving the Christiansburg, Virginia, area since 1974. In addition to a large selection of cars and trucks from various manufacturers, Shelor Motor Mile also has an in-house financing department that can help customers determine a financial plan for buying their desired vehicle. They also make trading-in a vehicle a seamless process and offer a sizable assortment of pre-owned cars. Shelor Motor Mile is owned by Hagan’s father, David Hagan.

● Pruett is seeking her first victory in the Carolina Nationals, as well as her first No. 1 qualifier at the event. Pruett earned two of her four career wins in Pro Modified at this event in 2011 and 2012. Her best Top Fuel effort was a semifinal loss to J.R. Todd in 2015.

● Hagan was the first Funny Car driver to break the four-second barrier when he completed a run of 3.995 seconds in 2011 at Charlotte. His milestone run was commemorated with a sign on the retaining wall near the starting line.

● The Carolina Nationals will be a family affair for TSR as team owner Tony Stewart will host approximately 80 people from Stewart-Haas Racing. SHR is just nine miles north of the track in Kannapolis, North Carolina.

You were five-for-five on your runs at Charlotte earlier this year. Talk about your confidence going back there in the Countdown.

“When we ran Charlotte earlier in the spring, we had a much different clutch combination than we do now. Therefore, we won’t exactly go back to that setup, instead our takeaway will be how accurate we were on making different calls between those rounds and apply that confidence to the calls we’ll make between rounds again this time.”

You first ran the Code 3 Associates Top Fuel dragster at the NHRA Four-Wide Nationals in Las Vegas, where you earned the provisional No. 1 qualifier on Friday, secured the No. 3 qualifying position, and then advanced to Round 2. Code 3 Associates is in the midst of hurricane season and ready to deploy on missions where they are needed. Describe the importance of representing Code 3 Associates.

“Just as it’s our time to shine and perform at our peak during this part of the season, it’s similar to Code 3 Associate’s clutch moments, especially as we’re in hurricane season. They do a great job of educating the public and encouraging them to make a plan at home when disaster strikes.”

With one race in the six-race Countdown under your belt, what is your mindset heading into Charlotte?

“Our mindset is pretty good heading into Charlotte. I think we have some things we have to figure out on the racecar when we’re trying to apply power and run really hard. Having three (races) in a row, you have to prepare yourself mentally. It affects parts and pieces, wear and tear on your body and with the racecar. We’re just trying to keep everybody up and mentally focused.”

How does every round play a role in the championship battle?

“I want to come in, leave on time, keep it in the groove and turn the win light on. It was nice to see a couple win lights this last weekend. These next five races are everything. We’ve prepared for it all year long to be here.”

You’re running your family’s Shelor Motor Mile scheme for the second time this year. What does that mean, with Charlotte considered as one of your home races?

“It’s special to be able to run the Shelor Motor Mile scheme. We have so many people come locally from the dealerships. I think it’s great and I’m pumped about it. I haven’t gotten a Shelor Motor Mile win yet, so I really think this would be a great opportunity to do that with the way this car is running. How special would that be? It’s always eluded me, so I want to dig deep and get it in the winner’s circle this weekend.”