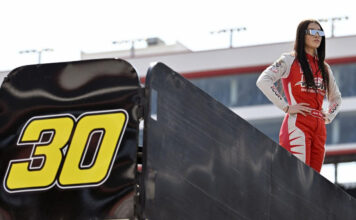 SALEM, Ind: The penultimate ARCA Menards Series race of the season is on deck for rookie Amber Balcaen and her Rette Jones Racing team and they plan to leave their mark in Saturday afternoon’s Herr’s Snacks 200 at the historic Salem (Ind.) Speedway.

After a brutal stretch of misfortune for Balcaen and her Mooresville, N.C.-based team the last several months, there appeared to be light at the end of the tunnel when she returned to her impressive top-10 form at Kansas Speedway earlier this month.

Unfortunately, an aggressive move by a part-time driver ended any hopes of back-to-back top-10 finishes for Balcaen and her No. 30 ICON Direct Ford Fusion team in the series’ most recent race at Bristol (Tenn.) Motor Speedway.

The tough finish has angered the driver and team who are determined to bounce back and fight for the respect they deserve on the track not only this weekend at Salem but in next Saturday afternoon’s season finale at Toledo Speedway.

“As I mentioned at Bristol, I’m sick of us being taken out because people think they can just run us over or take us out for whatever they feel their reason is,” said Balcaen. “I have worked hard to get to the ARCA Menards Series. My team busts their behinds to bring me fast No. 30 ICON Direct Ford Fusions each race and our sponsor doesn’t deserve us not seeing the checkered flag.

“I have no problem with racing people clean and I’ll race them with respect as long as they show me respect, but we don’t need any more races to end with us in the garage and we’re going to stand our ground even at a tough and demanding short track like Salem Speedway.”

Balcaen has never been to the Southern Indiana race track, but she has had many conversations with her crew chief and co-car owner Mark Rette who has enjoyed prior success at the half-mile short track in the past.

She hopes his leadership will lead to her fifth top-10 finish of the 2022 ARCA Menards Series season.

“I don’t know much about Salem Speedway but from the looks of it, it has similar characteristics to Bristol (Motor Speedway),” said Balcaen. “Being a short track with high banks, however, I know the line is much different than Bristol so should be an interesting track!”

Of course, Balcaen has been advised by Rette that the fastest way around Salem is hugging the top lane in Turns 3 and 4. And if you survive Salem without claiming the famed “Salem Stripe,” you might not be circling the track fast enough.

“I’m prepared to earn my Salem Stripe this weekend,” Balcaen expressed. “I will ease up into that high lane with coaching from Mark (Rette) and my spotter. I don’t want to do anything that is going to hurt us from making laps in practice and qualifying, but I’m sure the racing will be aggressive on Saturday and the stripe will be well earned.”

With just two races on deck, including the season-finale at Toledo Speedway on October 8, Balcaen looks to end her freshman season on the tour with some confidence on her side.

Despite the bad luck that has seemed to shadow her and the team for much of the year, the team has been able to compensate with talent and speed which allowed Balcaen to embrace new tracks with strong practice and qualifying efforts even if the box score doesn’t show favorable results.

“It is very encouraging that we have shown speed over the last couple of months, but I really want to get some good finishes over the next couple of weeks,” added Balcaen. “We’ve endured enough bad luck throughout the year, it’s time for good luck to fall our way and carry some momentum into the offseason.”

With top-10 finishes at both ARCA races at Kansas, Iowa Speedway and a career-high seventh place result at Charlotte (N.C.) Motor Speedway in May, Balcaen is hopeful for her fifth top-10 finish.

“I really want to get us back in the top-10 this weekend,” she said. “That is the goal for the next two races, finish inside the top-10 and collect as many points as possible.

“I’d love to get ourselves back inside the top-five in the championship standings, but we will just have to wait and see if that’s even achievable.

“One thing is for sure though; our team doesn’t quit and we refuse to quit even if there are just two weeks left in the season.”

For Rette, he continues to be proud of the resilience of his young driver and believes the stretch drive to the end of the season will be the team’s strength.

“Amber is staying incredibly resilient, especially after the highs and lows of the last couple of weeks,” explained Rette. “We have just two races left on the schedule and they are very demanding short tracks, but I think Amber will adapt to them well, including Salem and contend for a solid finish.

“Salem is no piece of cake, but neither was Bristol and Amber was able to quickly get up to speed and keep that pace until she was blatantly taken out. If we can avoid the chaos and carnage that some of the short track races have showcased this season, we should be in great shape for a strong finish with our No. 30 ICON Direct Ford Fusion.”

ICON Direct will continue to adorn the primary positions on Balcaen’s race car in their 19th of 20 races this season.

Entering Salem, Balcaen sits seventh in the ARCA Menards Series championship standings, 64 points out of fourth and 189 markers in the arrears to championship leader Nick Sanchez.

“Mark (Rette) and the entire RJR team have worked their butts off this year,” sounded Balcaen. “It hasn’t been easy with the schedule but they have kept plugging away to put good cars together to bring to the track for me week in and week out.

“I have learned a lot as a driver from Mark, he’s really helped improve my knowledge and skills. I get so much support from all the guys on my crew and feel they really believe in me which is super important for a team to have belief in their driver. I am very grateful for all of them.

“I want to still put together some top 10s and maybe even sneak a top-five by the end of the season. I know we have it in us. I hope we are able to recover from Bristol and I am focusing on the positives of the speed and progression we have shown to aid in both my Salem and Toledo debuts.”

Twenty Races on Tap for ARCA Menards Series in 2023