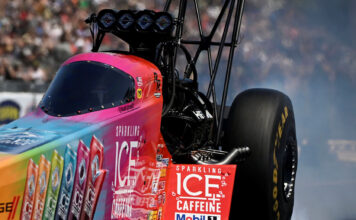 ● The NHRA Midwest Nationals near St. Louis is the 19th race on the NHRA Camping World Drag Racing Series’ 22-race schedule and it is the third round in the six-race Countdown to the Championship. Tony Stewart Racing (TSR) drivers Leah Pruett (Top Fuel) and Matt Hagan (Funny Car) are both in the Countdown, with 2022 marking Pruett’s sixth appearance in the NHRA postseason and Hagan’s 11th.

● Pruett’s Top Fuel dragster will also feature Rite in the Rain as an associate sponsor. Rite in the Rain is a line of All-Weather notebooks and pens designed to handle any weather or environment. The Rite in the Rain story began nearly a century ago in the forests of the Great Northwest. Entrepreneur Jerry Darling recognized the logging industry’s need for a durable material that could be written on and survive in poor weather conditions. Darling developed a special coating that created a unique moisture shield on the hand-dipped sheets of paper. Located in Tacoma, Washington, Rite in the Rain’s continued mission is to provide products for professionals and enthusiasts who brave the outdoors.

● Baja Vida Snacks are influenced by the culture of the Baja Peninsula, where freshness and adventure abound. Its line of beef jerky has been a staple since the company’s inception in 2019, all of which are Baja inspired and support “The Flavor of Adventure”. Baja Vida Beef Jerky launched with five core flavors – Traditional, Lime & Serrano, Sweet Orange, Salsa Fresca and Churro. Two additional flavors were added in 2021 – Crackin’ Pepper and Street Taco. Baja Vida Snacks also offers a variety of beef sticks, dried mangos and seasonings. Baja Vida Snacks joined TSR earlier this year as an associate sponsor and the Midwest Nationals marks the brand’s first NHRA event as the primary sponsor of Hagan.

● Pruett is seeking her first victory in the NHRA Midwest Nationals, as well as her first No. 1 qualifier at the event. Pruett has gone to the semifinals in three of her last four appearances (2018, 2019 and 2021). However, Pruett does own a win at the track – 2018 in Factory Stock Showdown. She has also competed in Pro Mod at St. Louis, advancing to the second round in 2012.

● DYK? Built in 1967 solely as a drag-racing facility, St. Louis initially began as a 1/8-mile drag strip until the track was extended to a full 1/4-mile in 1971. Having been developed on dormant swampland that was long ago buried by the Mississippi River, the track soon adapted the nickname “The Swamp.” The facility now features a 1.25-mile oval that hosts the NASCAR Cup Series, NASCAR Camping World Truck Series and the NTT INDYCAR Series, as well as a 2-mile infield road course and a state-of-the-art karting facility.

St. Louis is known for being one of the faster tracks on the NHRA circuit. What makes the venue so unique?

“The fall Midwest, crisp weather makes for prime track conditions. Also, many teams are really dialed into their performance program at this point in the season. As teams get solid in their stride, elapsed times tend to plunge, especially midway into the Countdown. It’s do or darn near die trying to make a difference in your points standing.”

You and your team will focus on tuning your car to a maximum level at St. Louis. For the novice drag racing fan, explain the effect added tuning has on the parts and pieces of your Sparking Ice +Caffeine Top Fuel dragster.

“In the most ideal world, we would have maximum performance with minimal parts attrition. We expect to be able to push harder, while keeping our rotating assembly of parts healthy, but it’s usually bearings and pistons that take the most beating when the wick is turned up. You can even have a burnt gasket or head, which can be seen by a change in header pipe flame pattern and color, or additional flames in the wrong places. There are a strong handful of teams that have destroyed dozens of big ticket items like engine blocks, superchargers, injectors, etc., in search of maximizing their tune-up. My crew and crew chiefs have done a phenomenal job of running competitively, while keeping me and our parts safe as we systematically improve our overall package. It’s not something that happens overnight. It takes dozens of races and test sessions for the complete picture to come together of how to safely and effectively move forward.”

You’ve advanced to the semifinals in three of your last four appearances at St. Louis. Explain how significant it would be to advance to the finals now that we’re at the halfway point in the Countdown.

“The significance of making it to the finals in St. Louis would mean that we will have had the best hot rod and driver package that we’ve had all year. The competition is exponentially stiff and our program will have elevated at a high rate of speed throughout qualifying and eliminations to make it through that field. We have the mindset and strategy going into St. Louis qualifying to do just that with our Sparkling Ice +Caffeine dragster.”

You’re the defending event winner at St. Louis and you’ve advanced to the finals in five of your last 10 appearances at the track. What makes you so successful at St. Louis?

“It feels like it took me a long time to win at St. Louis. We need to win there this year, to be honest, if we want to win the championship. It’s a big race and there is a lot of pressure to perform to still be in the hunt. We have to step up and do some big things in St. Louis.”

You’re 60 points out of the championship lead. Now that we’re at the halfway point in the Countdown, explain the significance of a high qualifying position and what gaining points mean in each round.

“The Countdown puts pressure on everyone. You have to rise to the occasion and I know we are very capable of doing that. I feel confident as a driver to do my part on the starting line. I know we have to come in and be aggressive and put down on the racetrack all that the track will take. We have to leave it all on the starting line.”

You’re running Baja Vida Snacks on your Dodge Charger SRT Hellcat Funny Car for the first time this season. What does it mean to welcome a new sponsor to the NHRA?

“It’s amazing to have a sponsor like Baja Vida on the side of the car. To bring them into the NHRA is exciting for me and I genuinely enjoy their product. I love their dried mangos and the beef jerky. It’s a great product that I eat on the regular. I’m a cattle rancher and beef is what we do. To see a company like Baja Vida come in and want to be a part of our sport is a great thing. Hopefully, we can help grow their brand. I’m very blessed to be able to run a new paint scheme and have a new group of folks come in and check our sport out. I’m looking forward to promoting them at Menards. We want to make people aware of what a great product they have.”