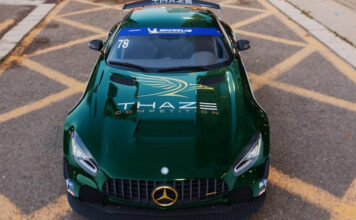 DETROIT (September 30, 2022) – Thaze Competition, a racing team based in the metropolitan Detroit area, has announced its plans to enter the 2023 IMSA Michelin Pilot Challenge Series as a Mercedes-AMG Motorsport Customer Racing team with a pair of Mercedes-AMG GT4 entries in the top-tier Grand Sport (GS) class.

The team’s driver lineup is being finalized with Thaze in final negotiations with a driver pairing for one of the two cars.

“Based on my past experience, we want our drivers to have access to the tools typically reserved for factory professionals,” Team Principal Faisal Ahmad said. “What’s been missing for me is that holistic approach to sports car racing where drivers are supported with ongoing mental and physical fitness, nutrition and even media training. Essentially, we want to give our drivers and crew members all of the tools they need to perform at their best and give them a competitive edge.”

Thaze Competition is enlisting the expertise of best-selling author, celebrity fitness and nutrition expert Drew Logan from NBC’s “STRONG,” and is implementing an advanced strength and conditioning program to maximize the performance of its drivers and team members.

“We were inspired by the impressive debut that Trackhouse Racing and Justin Marks have made in the NASCAR Cup series,” Team Principal Brian Makse said. “What Justin and his team were able to achieve in such a short time was astonishing. At the same time, I saw many similarities between what Trackhouse has done and the way we can do things in IMSA. What Trackhouse immediately recognized was that the integration of entertainment with the business of professional sports is essential to their success.”

Thaze Competition is developing an ongoing unscripted series about the IMSA Michelin Pilot Challenge, the goal of which is to introduce new fans to sports car racing in the United States. The series takes a wide-angle view of the championship, looking at the personalities and inner workings of both experienced teams and a freshman outfit like Thaze Competition.

“While our passion for motorsport is at the heart of this project, we have a keen focus on sound business practices and commercial opportunities that will allow the team to be financially sustainable for the long term,” Ahmad said. “This will allow us to expand our offerings with drivers and team members who share in our vision.”

The team is scheduled to take delivery of a new Mercedes-AMG GT4 in mid-December in addition to acquiring a race-proven car that has already been used in North American competition.

“In the short term, we’re already planning beyond IMSA Michelin Pilot Challenge and are putting together a ladder for driver development and competition opportunities that run from club racing through to entry-level professional series,” Makse said. “One of the great things about sports car racing today is that drivers can choose from several different championships to suit their level of development and we’ll be here to encourage that.”