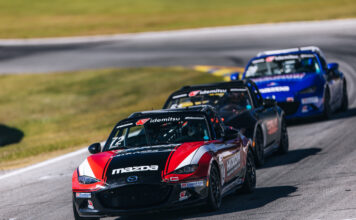 Zilisch started the 45-minute race from outside the front row, but immediately took over the top spot. He and polesitter Sam Paley (No. 28 McCumbee McAleer Racing) controlled the first part of the race before being joined by Tyler Gonzalez (No. 51 Copeland Motorsports). The trio worked together and pulled away from the rest of the field.

Drama was unfolding behind them. Wagner, the defending champion and closest rival to Thomas, came into pitlane after five laps with a broken steering rack and his race was done.

Thomas, meanwhile, was struggling without power steering and hovering at the back half of the top 10. Wagner was no longer a threat to the championship, but the farther behind Thomas was to Zilisch, the smaller Thomas’ lead would be going into the final race on Friday.

A late full-course yellow to get a stranded car out of the Turn 10 gravel erased the lead the front-runners had built and gave Thomas one more chance to maximize his points.

The race resumed with 10 minutes left on the clock for a three-lap dash to the checkered flag. Zilisch grabbed the lead from Paley who fell to fourth, which gave Rollan the opportunity to move into second. Rollan became Zilisch’s wingman and pushed him away from third-place Gonzalez and eventually across the finish line.

“I come to the track to win and that’s what I did,” Zilisch said. “I have to thank Selin [Rollan] though. He helped me out more than I expected and more than he needed to. Thanks to the whole Hixon Motorsports team, it’s a championship fight now and I’m just looking forward to tomorrow and see what I’m going to be able to do. I’m just going to go out there with the same goal of winning the race and whatever else happens, happens.

“The yellow was good because it got Selin back in the race,” he added. “I was a little skeptical about it because it brought everyone else back into the race, but we managed it well and were able to come out with a 1-2 finish for the team. I’m just looking forward to Race 2 tomorrow.”

The race win earned Zilisch 350 points, plus 10 points for leading the most laps and 10 points for starting Friday’s race from pole. This brings his total to 3350 points, moving him to second in the championship, only 30 points behind Thomas.

Rollan, who is not in championship contention, was happy to help his teammate and return to the podium for the first time since Mid-Ohio Sports Car Course in May.

“I’m really, really happy with that run today,” Rollan said. “I’ve had a bad few races since Watkins Glen. It is great to be on the pointy end most of the weekend. And for sure, super happy for Connor and to give the team a 1-2 finish! Thanks to Hixon Motor Sports and thanks to Austin Hatcher for making all this possible. I’m happy to be back on the podium. It’s been a while!”

Gonzalez, who is also not in championship contention, was hoping to add a race win to his record, but with the teammates ahead of him working together, it wasn’t to be.

“We were all working really well together and just pushing away trying to make it a three-car race,” Gonzalez said. “Then that yellow came out and it kind of messed up our plans. At that point it was a mad dash to the end and ended up being the two Hixon cars versus one Copeland car.

“Third place still feels good,” Gonzalez continued. “Hopefully next year we can go for the whole championship. It was unfortunate that I had some conflicts this year. Overall, the Copeland boys gave me a great car and I couldn’t be happier.”

Paley ended up fourth, followed by Thomas in fifth.

Zilisch has locked up the Rookie of the Year championship but will need to overcome a 30-point deficit to Thomas to take home the title.