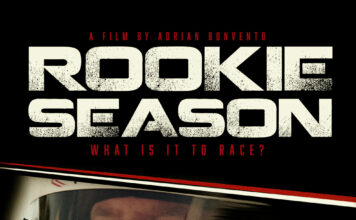 Motorsports is an incredibly compelling spectator sport full of exhilarating action. An often-overlooked aspect of motorsports is the emotional ups and downs a team will experience during any given series. Most of the time, the media focuses on the champions and the race itself, and it is rare to see a candid look into what it takes to be a part of a motorsports team.

Rookie Season is a feature-length documentary filmed, directed, and edited by Adrian Bonvento that brilliantly showcases the emotions, strategy, cohesion, and willpower required to succeed in a sport against impossible odds. The documentary covers Rebel Rock Racing’s rookie season during IMSA’s 2019 Michelin Pilot Challenge with the focus being on drivers Frank DePew and Robin Liddell.

The bar for the film is set high during the opening sequence. It was nothing short of a completely immersive environment. Immediately, the camera places you directly inside the car alongside Robin Liddell, and the only dominating sounds are the loud engine and an anxiety-riddled conversation between Liddell and his fellow team members. Scenes like this within the cockpit are littered throughout the film and are used to create suspense and unease. I truly felt like I was there and shared the anxiety with the Rebel Rock Racing crew during these moments. The team’s successes filled me with adrenaline and joy causing me to celebrate with the Rebel Rock Racing team when they achieved their goals. In contrast, the team’s failures weighed significantly on me and left a lingering emotional investment throughout the film.

Coinciding with the previously mentioned failures, Rookie Season was never afraid to display the emotional toll failure has on the individual and the team. The cinematography director Adrian Bonvento used throughout the film was a brilliant medium to showcase the levels of emotion. It felt incredibly personal. As if I was there as a fly on the wall and the driver and team were just colleagues and friends discussing and doing whatever it takes to achieve success. The scenes featuring calm preparation with voiceover narration allowed me to decompress between the exhilaratingly stressful and visceral scenes from within the cockpit. The film perfectly captivates and caters to the average viewer. I did not need any sort of knowledge about the actual involvement of a racing team to relate with the Rebel Rock Racing team. While there are plenty of documentaries about racing, I feel strongly that this one accurately encapsulates the psychology behind the scenes of motorsports.

I typically do not watch much coverage of IMSA and was unsure of what to expect when going into this film. However, Rookie Season does not require the viewer to have extensive motorsport knowledge to enjoy what it offers. For anyone on the fence and who wishes to understand what it takes to be a racecar driver; you need to watch Rookie Season.

For those with an Amazon Prime membership, you can watch Rookie Season on prime video with one click to immediately begin watching. Additionally, Rookie Season is available on many streaming services like YouTube and Google Play. You can find all the information you need at RookieSeasonFilm.com.