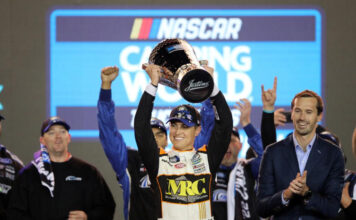 Will Celebrate First Championship in Nashville

The win at Phoenix capped a four-win season for the FRM truck team led by partners Ford, MRC, Love’s Travel Stops, Speedco, Fr8Auctions.com, Boot Barn, Horizon Hobby, RTA, First Phase, SEM and Plan B Sales. Smith finished in the top-10 in every race this season except for four. His remarkable season ended at Phoenix with an exclamation point after earning the pole, winning all three stages and the championship.

FRM also continued to excel with its two-car NASCAR Cup Series operation. Michael McDowell and the No. 34 team had 12 top-10 finishes and two top-five results. McDowell had two third-place finishes that came at Sonoma in June and Talladega in October. McDowell’s average finish in 2022 was nearly four positions higher than any other in his Cup Series career. McDowell was once again anchored by Love’s Travel Stops on the No. 34 Ford Mustang. Other partners included Fr8Auctions.com, Horizon Hobby, WISE-EV, Stage Front Tickets, Navage Nasal Care, Chicago Pneumatic and FloRacing.com.

“We knew that 2021 was a great season when we won the Daytona 500, but everyone dug in and we had an even better 2022 defined by our first championship,” said Jerry Freeze, General Manager, Front Row Motorsports. “It’s a testament to the men and women working at Front Row Motorsports, our drivers and all our partners. They worked hard to improve and we’re getting stronger on and off the track. More people are taking notice of what we’ve been building and now we just need to keep getting better. We’re excited about what we can do in 2023.”

FRM will next compete at the 2023 Busch Light Clash at The Coliseum on February 5 at the Los Angeles Memorial Coliseum.