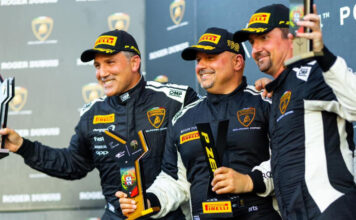 PORTIMAO, Portugal (November 18, 2022) – Star Spangled Racing’s Tiger Tari made the most of his first international racing event during his first season of professional racing, earning a podium during the Lamborghini Super Trofeo Grand Finals at Portimao in early November.

The four-race weekend, which included a pair of races to cap the U.S.-based season and a doubleheader with Lamborghini Super Trofeo competitors from across the globe, came at the end of Star Spangled Racing’s first season of partnership with NTE Sport during the IMSA season. That pairing began with the season-opening Rolex 24 At Daytona and expanded when Tari got behind the wheel for the first time as a professional during the midpoint of the Super Trofeo season.

Tari made the jump from team owner and amateur driver, focusing mostly on SCCA, World Racing League and American Endurance Racing competition, to the professional ranks during the Road America rounds in the LB Cup class for inexperienced racers in the Star Spangled Racing No. 118 Property Restoration Software/Home Repair Network Lamborghini Huracan EVO Super Trofeo. After being collected by a rival in Saturday’s race and a part failure on Sunday ended both races early, Tari moved to Virginia International Raceway for the last domestic doubleheader of the season.

Tari’s focus at VIR was on finishing the race first, and a result second. That focus led him to his first career podium, a third-place finish in class.

With the momentum in hand, it was off to a brand-new track for Tari. Tari, a first-generation Turkish-American, started race one in fourth position in the LB Cup class, and despite a damp track held serve the entire distance – narrowly missing a podium. Race two, later in the afternoon, told a different story.

Starting second, one position behind NTE Sport teammate and friend Fred Roberts, Tari battled around the same Portimao circuit that hosted Formula One in 2020 and 2021. At the checkered flag, Tari held his second position and earned his second career podium, just behind Roberts.

“When I arrived in Portugal, I told the team I wanted to accomplish two things here,” Tari said. “I wanted to run in P5 or better, and I wanted to take at least one piece of hardware back. I was talking to Fred, and I said ‘wouldn’t that be awesome if we podiumed together, line one and two?’ Guess what we did the second race?

The final day of the event featured two races against Lamborghini Super Trofeo racers from around the world.In race one, Tari steered clear of a number of on-track incidents and scored an impressive fifth-place finish in LB Cup competition. He was running in the same position in race two, looking for improvement, when a broken axle ended his successful overseas trip early.

That podium was a product of preparation that began in those early rounds. On Friday at VIR, Tari was already mentally preparing for success. He spent the day intentionally wearing a Pirelli podium cap, a wardrobe choice noticed by successful pro Marco Holzer. Holzer was on site to drive the IMSA WeatherTech Championship GT Daytona Lamborghini Huracan for the NTE Sport and Start Spangled Racing collaboration.

“Marco said, ‘Tiger, I just got here and you’ve already podiumed,’” Tari said later. “I said, ‘this hat was given to me at a Porsche event years ago, but it’s similar to what I get here. Believe it or not, I’m preparing myself to get on the podium by wearing it, because I’m thinking like a winner.’ He laughed at me, but I was very serious. I was putting myself in the mindset.

“Once you see you can do it, it becomes possible every time.”

Star Spangled Racing’s collaboration with NTE Sport paid off, not only with a prepped race car but with coaching from the team’s professional drivers.

“I can’t thank Paul and all the guys at NTE enough,” Tari said. “Even before we got to Portugal, Glen McGee was instrumental in helping me on the simulator prepare for a brand new track. On site, Jaden Conwright got me up to speed quickly and helped me to improve throughout the weekend. That’s what makes the sports car paddock so great, even back at VIR I talked to Andy Lally, who just out of kindness gave me some advice to help finish the race without thinking about the end result, and it led to a podium. It’s a team effort to have any success at all.”

With the season in the books, Tari has already turned his attention toward a full-season effort in Lamborghini Super Trofeo in 2023. Those plans will be announced in the coming months in advance of the green flag.

Based in Jacksonville, Florida, Star Spangled Racing was established in 2020 by first-generation American Tiger Tari. Star Spangled Racing accelerated quickly, moving from club and endurance events into professional racing just two years later with a Lamborghini Huracan GT3 Evo in the 2022 IMSA WeatherTech Championship GT Daytona (GTD) class in a partnership with NTE Sport. Tari extended his driving career by finishing the season in the LB Cup class of Lamborghini Super Trofeo during the 2022 season. More information can be found at www.starspangledracing.com.