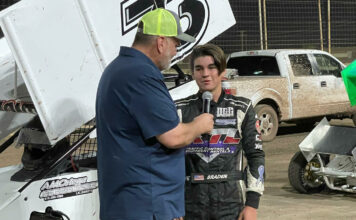 (El Cajon, CA, November 18, 2022) One of California’s brightest young racing stars, Brayden Chiaramonte, drove to a second-place finish on the first night of the Tribute To Billy Shuman at Arizona’s Adobe Mountain Speedway. Twenty-four hours later at the finale, Chiaramonte was headed for the front of the pack when he got crashed out of the race.

For the Tribute race, Chiaramonte was making his first appearance at the picturesque track located near the Adobe Dam in the Phoenix suburb of Glendale. His first night of competition saw him turn in the 12th fastest time of the 27 cars on hand in hot laps. In his heat race, he started inside row two in the third position and quickly made his way to the lead and the eventual win. For the main, the talented driver began on the outside of the front row in second and he brought the family owned #73B home in the same spot that he started in.

The 15-year-old racer returned for night two and was greeted by a swelled field of 45 cars. That nearly doubled the amount that was there 24 hours earlier. In his heat race, he started seventh and moved up five spots to place second. That result, combined with his performance from the previous evening, placed him on the top of the point list going into the main event. The race had a redraw for the finale and the friendly driver pulled an eight. That meant he would start outside the fourth row of the 50-lapper.

As usual, the young driver was steaming his way toward the front of the pack. He was up to fifth and was making his move for fourth when he was spun out. That meant he had to restart at the back of the talent-laden field. Once the green flag came back out, Chiaramonte quickly began to weave his way forward. He found himself all the way back up to 10th and attempted to split two cars going into turn three. However, he got clobbered on the left front. The contact bent the front axle and broke the tie rod. That put him out of the main event and left him with a very frustrating 17th-place finish.

Chiaramonte is one of the early entries for the 38th Annual Lucas Oil Tulsa Shootout inside the massive SagNet Center in Tulsa, Oklahoma. The race will take place from December 26th through the 31st. At the 37th running of the prestigious race, the then 14-year-old Chiaramonte burst into the spotlight as a rookie at the event. More than 400 cars showed up to compete with Chiaramonte in the Stock Non-Wing class. He made it all the way to the final on New Year’s Day and finished ninth overall. This year, Chiaramonte will be very busy competing in four classes! The Winged Outlaw, Non-Wing Outlaw, Stock Non-Wing, and Winged A-Class.

As the season is winding down, Chiaramonte and his team are making plans for another busy year in 2023. If you are interested in becoming a marketing partner with one of the most talented and affable young drivers in the sport, please feel free to call or e-mail Daniel Chiaramonte mailto:dchiaramonte@rtltraffic.com or (619) 988 7563.

A couple of months ago, Chiaramonte was a guest on the Racer Radio Show. You can hear a replay of the show (Chiaramonte comes on at around 24 minutes) at the following link http://www.perrisautospeedway.com/radio22/RACERRADIO220918.mp3.

Chiaramonte would like to thank the following marketing partners for making his 2022 racing season possible. RTL Traffic Control and Equipment Rentals, AM Ortega, Impact Racing, and AIM Sports Data.